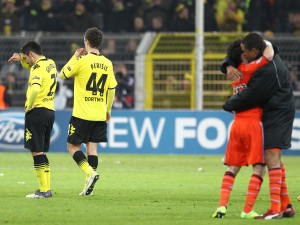 Tuesday evening, around 10.45pm. I'm on my twenty-minute walk home from the Westfalenstadion after the last match of this season's Champions League run against Olympique Marseille. I carry two bottles of Dortmunder beer with me. The streets are filled with cars which are filled with BVB supporters. No celebrating this time. No chants on the street, just some sort of mingling. The only sounds I can hear, however, are the voices in my head thinking about the last 90 minutes, asking myself how I could write a match report about this match and the sound of the little bell hanging at my black and yellow Santa hat, jingling as I shake my head in disbelief. For the first time since a long time, I go home disappointed. Not about the kind of gameplay we showed in the match, even not really about the (in the end) not really interesting result... but about the way we gave the victory away in just five minutes. About the way Borussia left Champions League 2011/2012.

Yeah, it was a hell of a run which started with a brilliant choreography against Arsenal and a late Perisic equalizer which felt like victory. What followed are bitter memories. And even the last minutes of Borussia in Champions League won't find a golden place in the hearts of the BVB supporters attending the match in Westfalenstadion or watching it from anywhere in the world. No, I'm not angry at the team. How could I? I'm just disappointed. And even some 20 hours later, I find it hard to write about this match, about my emotions and about the 2-3 defeat against OM. We needed a big miracle to make it to the knockout stage and a little miracle to gain rank 3 to qualify for Europa League. What we eventually got were sweet dreams which turned into nightmare. And a result which was quite fitting for the whole Champions League run. 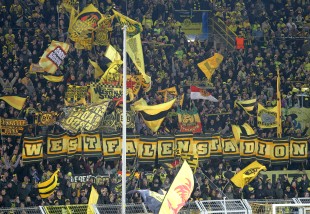 Borussia needed to win against OM with four goals to overtake the French in the rankings. To even get ahead of Olimpiacos, Arsenal's second team had to win in Greece. As we now know, they didn't and quite honestly, this was no surprise when you heard before the match that nine gunners stayed in London. So basically, the match was about Borussia's last chances to stay in Europe and Marseille's opportunity to stay in the Champions League.
Borussia missed Schmelzer because of his yellow-card ban as well as the injured Leitner, Subotic and Bender. While young Löwe took the place of Schmelzer, Kagawa and Großkreutz found themselves on the bench in comparison to the match in Mönchengladbach. Their replacements were Kuba and Barrios. Marseille had to find alternatives for Gignac, Morel and Fanni.
Before the match, the atmosphere in Westfalenstadion was very tense. One could feel that the belief in a real miracle was not common for everyone who stood on the famous Südtribüne. Borussia made presents to the supporters by putting a Santa hat on each place in the stadium, accompanied by a little poem about keeping the points at home. Well, Christmas didn't come early on Tuesday.

To start out, it needs to be pointed out that two totally different halfs could be witnessed in the last Champions League game of the Deutscher Meister 2011. During the first half, Borussia was the clearly dominant team, being in more possession and outplaying Olympique Marseille for the whole 45 minutes. You could feel that the eleven players on the pitch believed in the miracle and in their opportunity, they fought for every inch and showed their passion for another time. The first opportunity for the important early goal (since three others were needed even afterwards) was given away by Mario Götze after eighteen minutes with a shot which ended up in the hands of goalie Mandanda. But the second opportunity of the match was used by Jakub Blasczykowski after Kehl extended a throw-in by Piszczek and Lewandowski assisted his Polish colleague who scored from round about 10 meters to secure the early lead and the important 1-0 for Borussia (23rd). 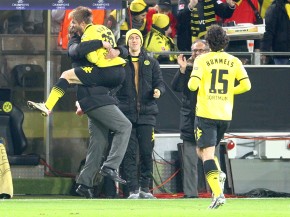 After the goal, Kuba's run into the arms of coach Jürgen Klopp somehow silenced some rumors about him being not content in Dortmund. With the early first goal, some belief came to me and the rest of the supporters on the stands and the atmosphere got better and better until some minute in the extra time to which I sadly have to refer to later on.
In the meantime, Borussia continued to outplay the French, a shot by Barrios only hit the wrong side of the goal net seconds later (28th). He was assisted by Kuba who really showed one of his better performances in black and yellow this time. One of the decisive moments, however, came up in minute 30. After a cross from the right, the ball would have found Sebastian Kehl in the six-yard box but Mbia tried to kick off the skipper's head, causing a penalty. Unfortunately, the UEFA once again sent a crew of uncapable English referees to Dortmund. Otherwise, Mbia wouldn't have been only booked for this devastating attempt of a bicycle kick but would have got the opportunity to shower early. Maybe coming in superior numbers would have been a decisive advantage for Borussia for the rest of this match. Maybe... Fortunately, the injury of our skipper did not turn out to be as worse as apprehended. No broken bones, but he will at least miss the Kaiserslautern match on Sunday. 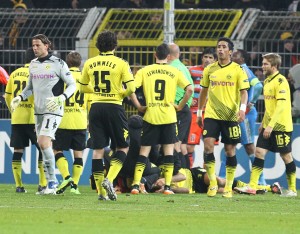 When the match re-started, Mats Hummels took responsibility by going for the penalty. We all can remember about the inability to score from the penalty spot during the championship season, but Hummels stayed cool and doubled the lead for Borussia (32nd). A more than deserved 2-0 lead for Borussia, the miracle came closer. At this point, I was really thinking about making the impossible possible even though I knew about the result of Arsenal in Greece as well, but making it to the Europa League would have been fine for me. As I was thinking about this opportunity, Mario Götze nearly scored the 3-0 after Barrios passed the ball back to the youngster from the right, but Mandanda and a French defender managed to clear the ball some meters before the goal (40th).
Five minutes of extra time were given by the English referee team (one of the lonely right decisions in the match) and in the fourth additional minute, Loic Remy hit the crucial (and decisive) 2-1 after a cross from the right side by Amilfitano. Once again, the feeling of getting hit in the face (like Kehl earlier on) was back. Borussia outplayed the opponent for the whole first half, was able to score twice in the first half and even going for the third one, the miracle was near and then, out of nowhere, you get hit directly in the face by Marseille using their one and only opportunity. Looking back now, of course, this goal was the decider and the explanation for the totally different second half. And who could blame our young team for that? Three goals were needed from that point on, you knew that Arsenal would be no help at all and all your dreams get shattered just seconds before the whistle. Not for the first time, Borussia was not rewarded for its efforts.

Like I said before, the second half was totally different due to the mentioned reasons. Even though a shot by Gündogan only found the hands of Mandanda (59th), Borussia's offense was reduced in comparison to the first 45 minutes. Kagawa and Perisic were brought in to bring in more offensive personal but in the end, the second half just went down somehow and the atmosphere in the stadium could not compete to the other appearances in the Champions League. However, credits have to be given for the supporters of OM who not only showed up in higher numbers than the ones of London and Piräus, but could be recognized as supporters by showing flags and chanting over 90 minutes. 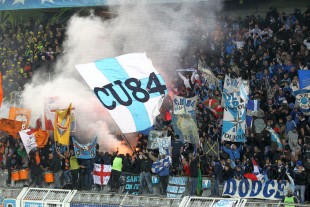 Sadly, their team could not keep up with the positive image of the supporters as some rude fouls can be seen on the pitch who were not even punished by the English referee team. Going into the last minutes of the match, it looked like Borussia would say farewell to the Champions League at least with a victory which would have meant the end of the French campaign as well. The Südtribüne continued to support the Deutscher Meister with hope-giving chants and calls for perseverance like "Leuchte auf, mein Stern Borussia" and just as everyone was ok with the result (since advancing to the knockout stage or even to Europa League seemed hopeless right from the beginning on), the next punches into my face came across. In the end, they are the ones which made me go home disappointed: Corner from the right, header Andre Ayew, 2-2 (85th), Valbuena with a nice shot from 16 meters, 2-3 (88th). The victory was given away in less than 180 seconds. Out of nowhere, you had nothing more to celebrate. Borussia was out of the Champions League, Marseille advances to the knockout stage, Borussia leaves with a more than needless defeat, sending me home disappointed (and I'm quite sure I'm not the only one leaving Westfalenstadion frustrated and angry). Like I said before, I am not angry at the team and I can understand that the motivation to play the second half or even the last ten minutes is not very high when you know that you are out of the Champions League and out of Europe. But I cannot keep this criticism away from the team. You cannot give away a victory like that. Not that easy, not that way, not without any resistance. This is what really hurts at the end of the day. 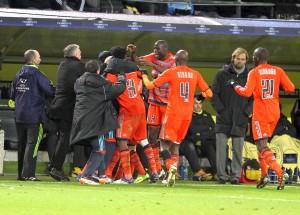 After the final whistle, some players of Borussia leave the pitch directly, some thank the fans for the support for a short time. The team and supporters of OM are celebrating together, the miracle eventually happened on the other side. At first, I stand on the Südtribüne, watching those scenes, applauding to the players in black and yellow who fought hard in the first half. After a few minutes, the pitch has been cleared and I sit down. The Westfalenstadion is emptied, only a couple of fans and the OM supporters are left in the temple. I shake my head in disbelief, causing the Santa hat bell to jingle once again. After a couple of minutes have been gone, I stand up, leave the stadium, get my beer and take my walk home. "Champions League sucks", I think to myself. Some twenty hours later, I have found the ability to look forward again. To the match against Kaiserslautern on Sunday, to the match in Freiburg and the cup match in Düsseldorf. Fuck off Champions League, we are still in for two trophies and we will come back next year anyway. The team is still great and will continue to grow on evenings like that. Just remember the last words of the club hymn: "Aber eins, aber eins... das bleibt bestehen. Borussia Dortmund wird nie untergehen!" ("But one thing stays for sure, Borussia Dortmund will never go down!")