Borussia at the pony-stable: Pole Position lost ? but still on track 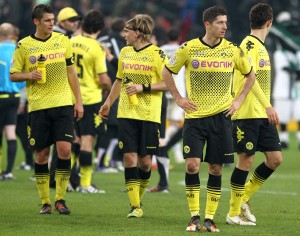 The festive weeks for the mighty BVB ended with a hard fought draw on some nameless cornfield at the Dutch border. After the match we went home towards civilization with the feeling that we could have won this. The only real Borussia was the dominant team for most of the match and our rising goal machine Robert Lewandowski finally found the net in an away game to give us the lead before the halftime break. But afterwards we missed the chances to "put the cat in the sack" as the multilingual Italian poet Giovanni Trapattoni would have put it. And so the much hated blue-scumboy Mike Hanke took the victory out of our hands. Since Buyern demolished Bremen they moved ahead of us in the table but one point behind the lead is still a great position to be in, especially since the young guns feel comfortable as challengers.

Before the match and side issues

Everyone knows that there is only one Borussia and she comes from the beer capital. But still there is a myth about a club from a tiny village that used to be great some centuries ago and goes by the same name as the reigning German champion. 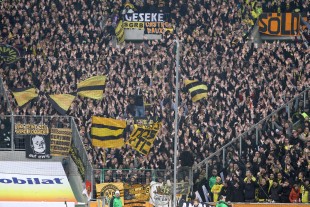 The VfL Mönchengladbach made a miraculous comeback last season after signing Swiss coach Lucien Favre. They looked absolutely relegated on the last spot of the table when he took over but he managed to bring the squad back to life to in the relegation playoffs where they beat the other VfL from Bochum. This season their winning streak continued and all of a sudden the worst Bundesliga team of last season looks like a title contender without many changes to the squad. So for the first time the Borussenduel was a match of 1st against 2nd in the league.
The ponyfarmers where missing their biggest star, Dortmund-born Marco Reus who played for the real Borussia in his youth days. With 10 goals and 3 assists he was the main factor of their offence this season but he broke a toe in last week's match at Cologne. Also Igor de Camargo a possible replacement was out with a torn ligament.
But Jürgen Klopp also had some puzzling to do because young Moritz Leitner who did a good job stepping into the giant footsteps of the indestructible Sven Bender in the derby was unable to play. So the almost forgotten Ilkay Gündogan made his comeback in the starting line-up alongside skip Kehl in defensive midfield. The panther Barrios had to watch the kick-off from the bench and was replaced by Kagawa Shinji. The same goes for Kuba Blaszczykowski who performed well in the derby but Kevin Großkreutz returned after missing most of the derby (Jürgen Klopp: Kevin is our machine, but even he needs a break from time to time).

The real Borussia started the match dominantly and conquered a few corner kicks. But the Dutch country lads had the first big chance after 5 minutes. Reuss replacement Raul Bobadilla tried a lob over Roman Weidenfeller but his shot was too weak so Schmelzer could clear it with a header on the goal line. Only minutes later Lewandowski had to put us in lead. Mats Hummels with a great delivery from the midfield found the Polish striker just onside. Robert dribbled past ter Steegen but Jantschke got a leg onto the ball before Lewandowski could put it into the net. BVB conquered a lot of corner kicks but could not really create any opportunities with them. The exception was a Götze corner directly to Kagawa Shinji who was waiting just outside the box. His volley shot was parried by ter Steegen directly to the head of Großkreutz but he was offside so the Dortmund supporters hoped in vain. 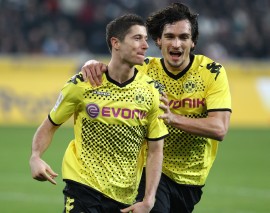 The 6th corner finally put us in the lead. Again it was Götze who delivered the ball and this time Gladbach made the fatal mistake of leaving Robert Lewandowski unmarked. Ter Steegen tried to save his header artistical but even though he got his hand onto the ball he could not prevent it from hitting the net. Lewandowski's 10th goal of the season was the 1st he scored outside the Westfalen temple. If he continues to score on the road as well from now on there is no telling how many goals he will collect until the end of the season. Two minutes later Lukasz Piszczek could have extended the lead but he was too surprised that a cross found him free in the box so he did not really hit the ball and his approach ended with something like a back pass.
Borussia went with a well-deserved lead into the halftime break. Even though the game was not that spectacular it was obvious that it was a duel of two well organized teams with different game plans. While Gladbach mostly waited for chances to counter-attack, BVB dominated the midfield and leading with 6-1 in corners showed how the young-guns tried to turn this away match into a home-game. The frenetic support of the about 12.000 Borussen on the terraces sure helped the team a lot.

Even though they were behind Gladbach did not give up their defensive approach in half two. The real Borussia continued to dominate and Piszczek, Lewandowski and Kagawa had proper scoring opportunities but all missed the goal. Gladbachs equalizer came almost out of nowhere because even though the ponies played their counter attacks well Roman Weidenfeller was not busy at all. Maybe that explains why Hankes shot from 20 metres caught him cold. The ball looked anything but unsaveable but Roman was a bit far out of his goal and his reaction came a bit too slow. Hanke out of all people the former Gelsenkirchener with a rotten blue heart who is much hated by all the BVB supporters. 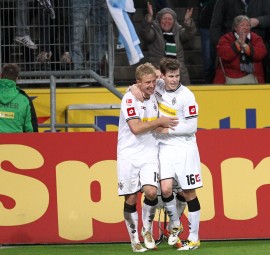 That was a tough blow for team and fans but Dortmund almost made a quick recovery. Mario Götze, who was not at his best yesterday and more than often lost the ball because he dribbled too much, played a nice deep pass to Kagawa Shinji. The Japanese returned the ball with a back-heel-kick and all of a sudden Götze was free 11 metres in front of ter Steegen. But Mario did not place his shot well so the Gladbach glovesman had no difficulties to clear the ball from the centre of the goal line. That had to be a goal and the disappointed Götze knew it right away. Gladbach seemed more than happy with the draw and did everything to get some minutes off the clock. The ref played in their hands by awarding only 1 Minute of extra time and so the match ended with a 1:1.
The BVB supporters were unsure whether to be happy with this result or not. But when you look back and think of a win at Munich and a total destruction of the blue scum in the derby you can be more than happy with the recent Bundesliga performances of the young guns. And being 2nd is a very comfortable position especially since the teams behind the all-important 3rd place (guaranteed Champions League qualification) seem to start to fall back a little. So everything could be hunky-dory from the BVB perspective, if the blue sky was not a little overcast by the prospect to be kicked out of Europe in the match against Marseilles next week.

Subs: Kuba and Barrios for Kagawa and Götze (77th), Perisic for Großkreutz (86th)