Abbey Road - Walk like the Beatles competition before the Arsenal match

There is a big week coming about a day away. First we take Munich, then we take London. Borussia Dortmund supporters recently stormed the Arsenal General Sale, bought tickets for the Emirates – it left the AFC Ticket office clueless. All they could do, was to relocate BVB supporters to another block. All they could offer was: No away colours, please! There are ways to work around it: Why not buy the The Unity BVB hat at a yet to be announced meeting point before the match? And why not join the schwatzgelb-Photo-cómpetition at Abbey Road before the big match. 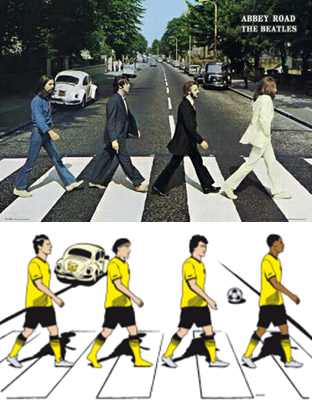 As some of you have already found out, schwatzgelb offers a shirt for your trip to London. It shows our back four walking the famous zebra crossing in front of the Abbey Road studios. Now the plan is, to take the Tube up to St. John's Wood, walk up Grove End Road and take pictures of you walking the Abbey Road zebra crossing in the colours that mean Borussia. The best picture will get a decent enough price to remember the day we made a big step towards Munich 2012 or at least to remember the day we showed the EPL snobs how loud fans can be it. Even if they are not allowed to sport their colours inside the block.

Unlike our German supporters we do not have to remind you about the story behind the Beatles' most famous album cover. And we do not have to tell you that Abbey Road is not Penny Lane and that Abbey Road is in London and that the Beatles where a band from Liverpool that left Liverpool for the capital. Still: We would just love to see your pictures. And remember: One has to walk barefooted. And Paul is dead!

For those of you, who can not make it to Abbey Road and to London, you can still follow the BVB fans walking the crossing via the Abbey Road webcam. For those of you taking pictures, just mail them over to us or post on our Facebook wall.