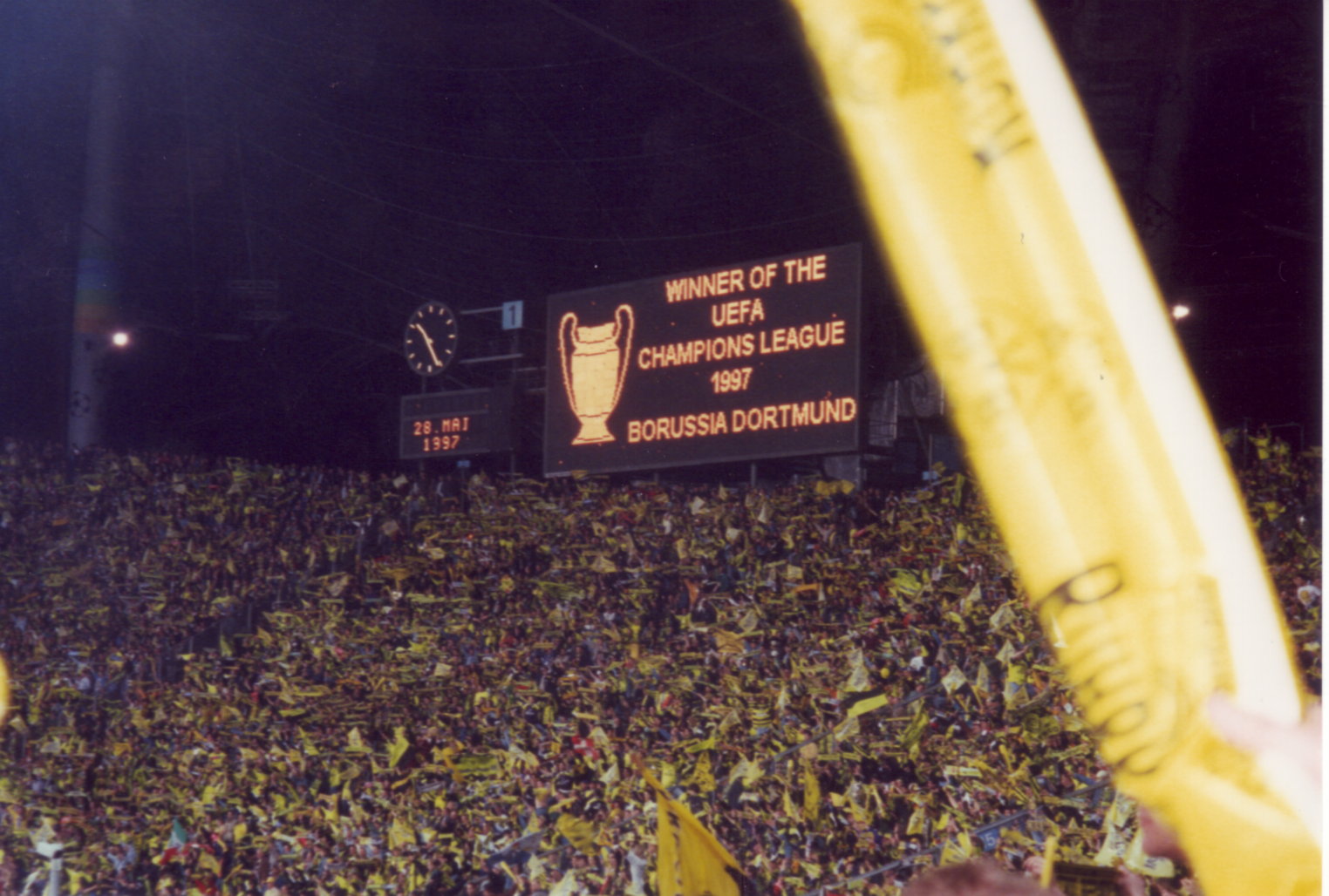 BVB insiders nod in agreement when they think about May, 28th 1997. It was not only a sunny Wednesday in spring, it was the day of the greatest success in Borussia Dortmund's chronicle: After a highly successful European CL tour with wins against Widzew Lodz, Steaua Bukarest, Atletico Madrid, AJ Auxerre and Manchester United our BVB won the 1997 UEFA Champions League Final against Juventus Turin. Everybody who watched that match live or on TV will always remember that impressive 3:1 for Borussia in Munich's sold out Olympiastadium.

And now, after an absence since 2003, when we lost the CL qualification match against Brugge, the current Bundesliga champion Borussia Dortmund is back in the Champions league! That means no more watching Champions league matches of other clubs on TV but watching Borussia's matches in our mighty Westfalenstadion or to accompany our young guns to CL matches in Marseille, Piraeus or London! 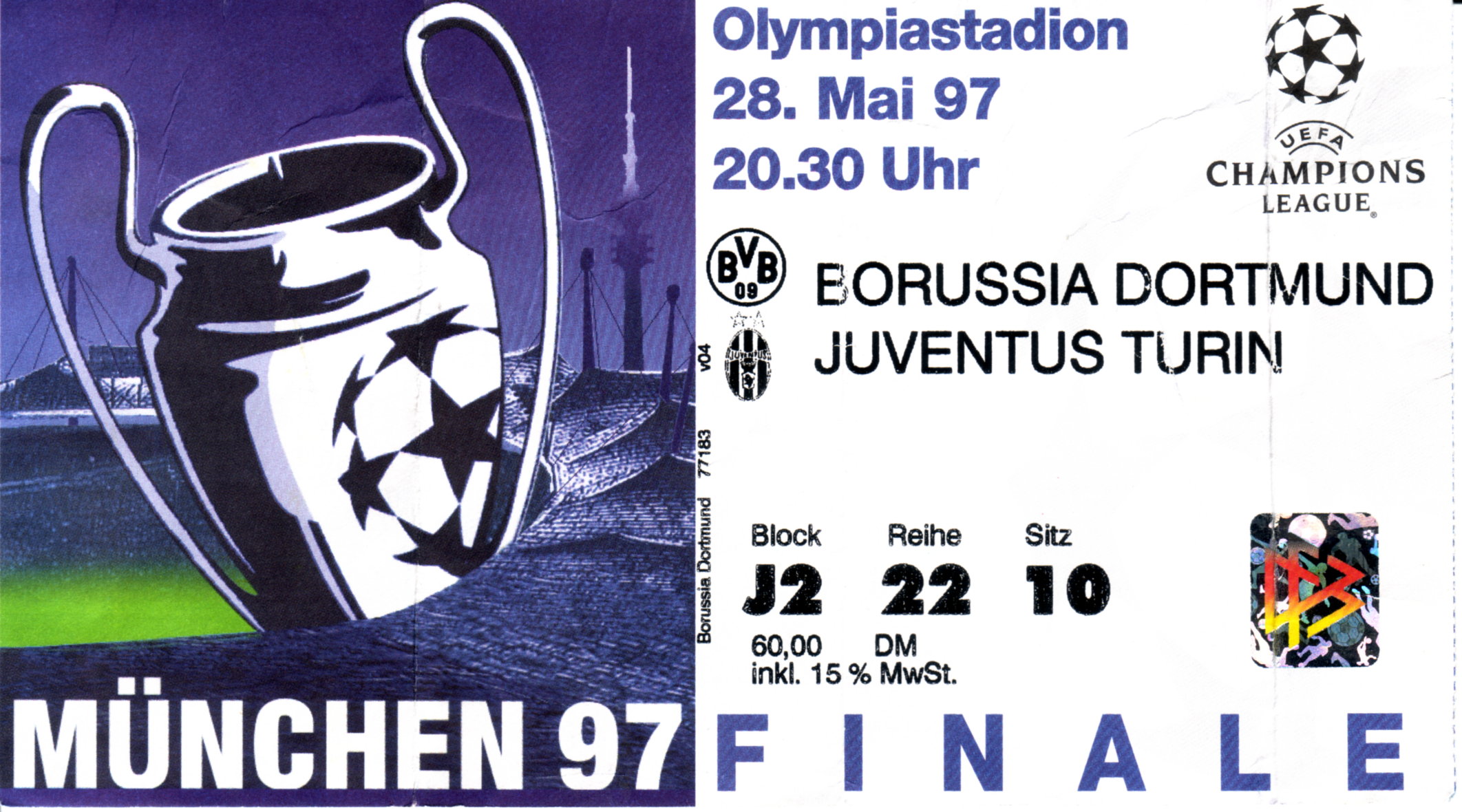 During these days of anticipation about our next matches against Piraeus I took my old photo album which includes a lot of memories about that great day in Munich, 14 years ago! Photo album? Yes, in 1997 digicams were dreams of the future and it is interesting how some things changed within 14 years. But the problem of purchasing tickets for Borussia's CL matches were in the "last century" nearly the same as today. And for the final it was understandably extreme difficult to buy a ticket. The ticket demand for Borussia fans by far exceeded the number of offered tickets. Nowadays the internet has a lot of possibilities for purchasing tickets, but in 1997 the internet just had not today's significance. In a local magazine I saw the advertisement of a person who offered 4 tickets for the final in Munich. After a phonecall my friends Ralf, Jörg and me met him on Thursday the week before the match. Meeting point was a street corner at a pharmacy in a southern suburb of Dortmund. The atmosphere was something like a crime thriller: as agreed we recognized him by a rolled newspaper in his right hand. He offered us regular 60 D-Mark tickets for 100 D-Mark. Yes I must confess it was irregular black market with black market prices! But was there any choice for us? No! We want to watch Borussia in Munich so we checked the originality of the tickets and gave him the money. No idea what was his source of supply and what was his name! We never saw him again and for sure without him it would have been impossible for us to travel to Munich and watch the final live! 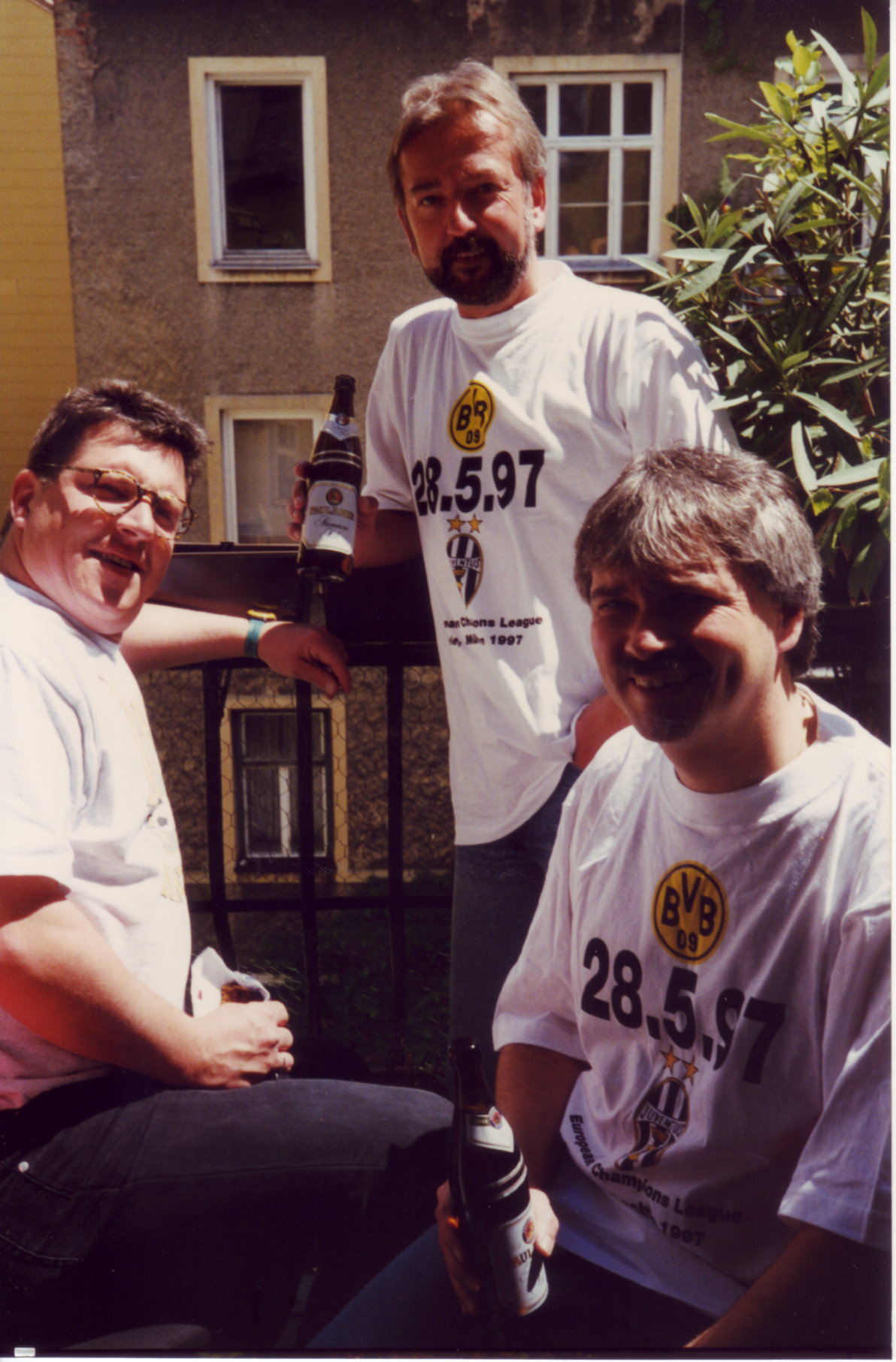 On Tuesday morning we started our Munich trip with my car from Dortmund. The fourth attendee was Markus, a colleague from Jörg. The day before Markus had to undergo a wisdom tooth surgery, so the start of our trip was more or less painful for him! But for Markus the best recovery was the certainty to watch the final the next day in Munich! Borussia Dortmund – the cure-all, the magic pill for each kind of slight pain or illness!
The night before the final we stayed in a friend's apartment in Heidhausen, a district not far away from Munich's centre. It was our friend's fate that he booked his holidays earlier that year so he had to leave some days before and missed the final. A horrible situation for a native-born Dortmunder, now living in Munich and not able to see his favourite team in Europe's most important football match! But to be honest, who of all the experts had been forecasted in late summer 1996 that Borussia would reach the final match in Munich? Maybe some hardcore optimists but for the majority, Borussia was a candidate for an earlier drop out. We all know that there is very often a big difference between forecasts and reality and luckily our Borussia proofed all forecasts wrong. After collecting the key from the next door neighbor, a cold beer on our friend's balcony was the deserved refreshment after our more than 600 km car ride. From another balcony some people recognized our Borussia shirts and wished us luck for the next day. "We are fans of Bayern Munich", they called, "but tomorrow we will cross our fingers for Dortmund!" "Thank you! Hopefully it will help", we replied, reason enough to raise our bottles in a toast to Munich. Even Bayern fans sometimes could be really likeable guys! After that we had a little sightseeing in Munich and closed the evening in one of Munich's typical Beergardens. On Wednesday morning other friends from Dortmund arrived in Munich. Some of them had booked hotel rooms, others also planned to stay the night in our friend's flat. As agreed we all met at Munich's Marienplatz to enjoy the atmosphere before the match and to visit some typical Bavarian pubs or beer gardens. All people on the streets, pubs and restaurants were in a very good mood and looked forward to the match on evening. Fans of Juve and Dortmund celebrated together with Bavarian beer and held inflatable cup imitations in their hands. For beer taverns in Munich's city like Hofbräuhaus, Donisl or Weisses Bräuhaus it was maybe the day with a record turnover in 1997. We decided for Weisses Bräuhaus where we spent the time until we took the tube to Olympiastadium. When we arrived there the view was awesome! Black and yellow was the absolute majority, the press wrote about 30.000 Dortmund fans and 59.000 viewers in total. In accordance to all the beergardens and taverns in Munich's city Dortmund fans commanded the majority. 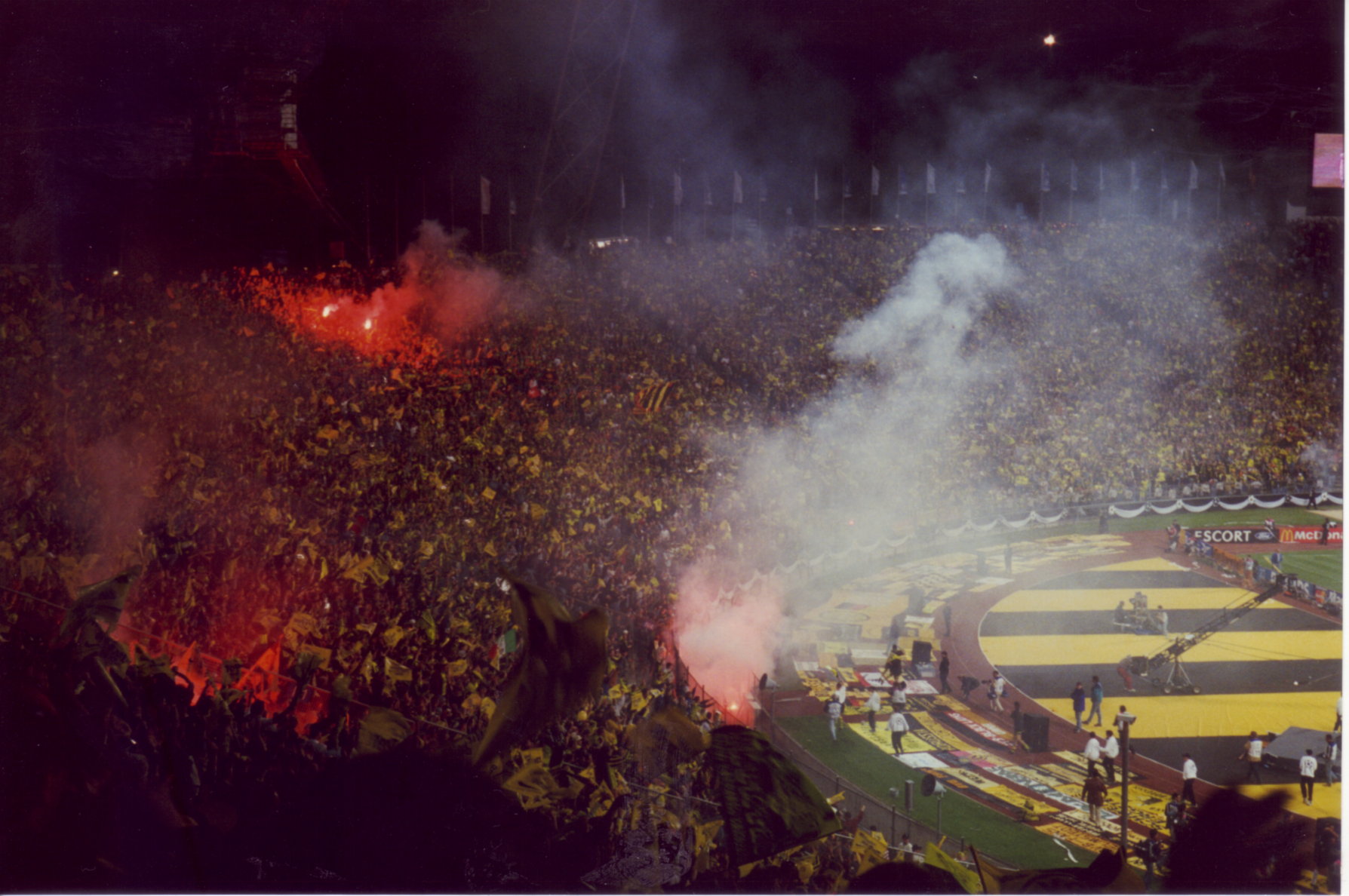 A lot has been written about the legendary final. So let me report only the highlights of that legendary evening in May: After a corner by Andy Möller, our Scottish midfielder Paul Lambert crossed to Karl-Heinz Riedle and our forward put Borussia ahead (29th). Only five minutes later another corner for Borussia: Karl-Heinz Riedle made his second goal with a bullet header! While all Juve fans couldn't understand what happened on the field, all Dortmund fans went wild! Two fantastic goals for the black and yellow outsider against top favourite Juve! The Italian team and also their fans seemed to be surprised and perplexed! In interviews after the match Karl-Heinz Riedle reported that he dreamed about his two goals the night before! His dream came true – a beautiful dream for Dortmund and a nightmare for Juve! But in the second half Alessandro Del Piero scored via a back-heel to make the score 2:1! Was our jubilation too early? There are rumors that viewers saw Bayern's mighty manager Uli Hoeness applauding Del Piero's goal but Hoeness never commented these reports! True or not? Never mind! Minute 71 solved all our doubts and fears! 20-year old "Dortmunder Junge" Lars Ricken entered the green as a substitute for Stephane Chapuisat. And only sixteen seconds after coming on the pitch Ricken surprised Juve's goalkeeper Angelo Peruzzi with a 25 meter shot. What a fantastic goal, what an important goal! Seconds and minutes we will never forget! Very emotional when Dortmund's fans called out for "Susi", Michael Zorc! Coach Ottmar Hitzfeld noted it and made the best decision: Susi entered the field (88th) to substitute Andy Möller. We all know the end, Borussia Dortmund won the Champions League Final, a 3:1 win against Juventus Turin! 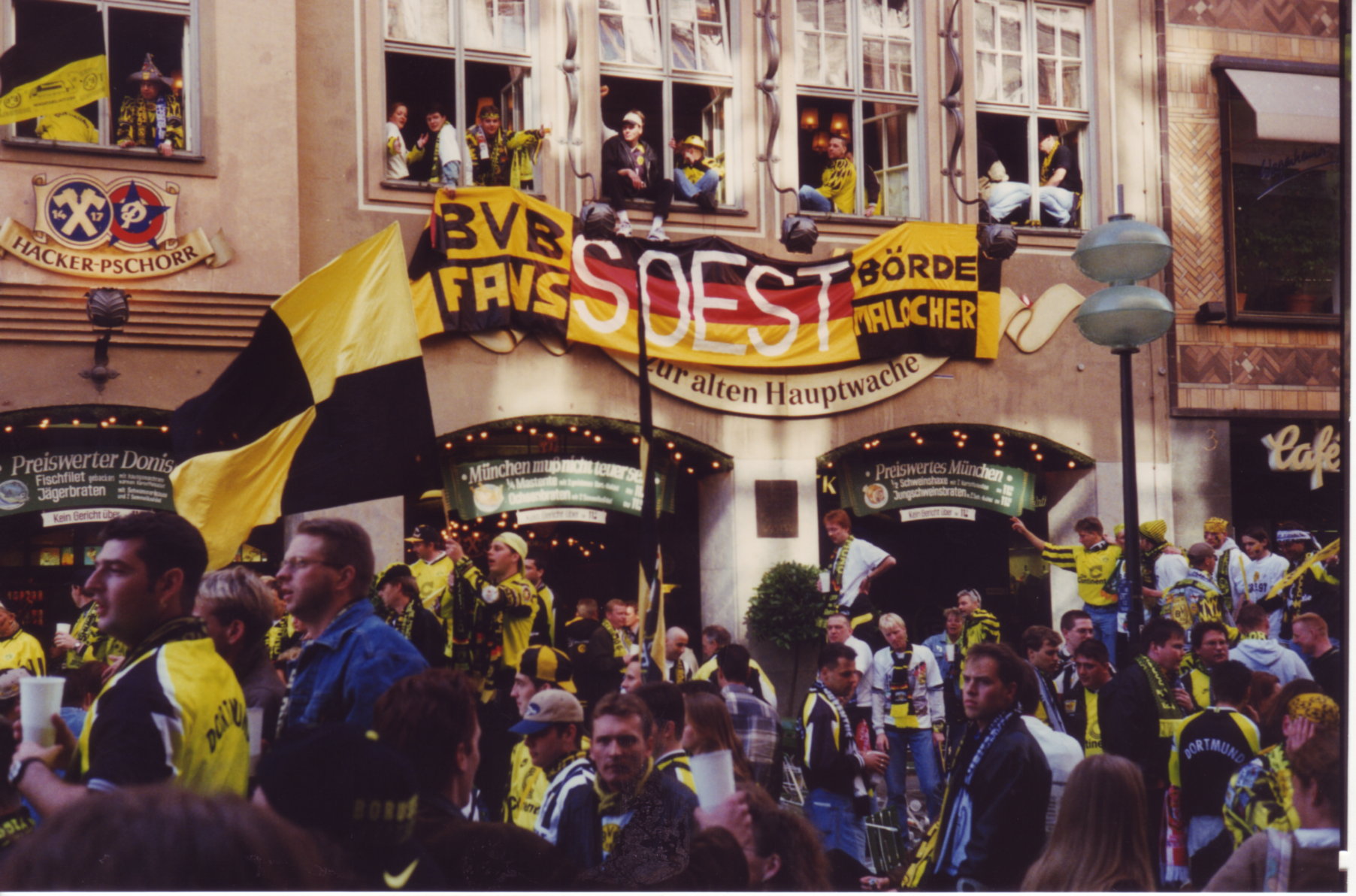 It took a lot of minutes for us to understand what happened! Borussia Dortmund was number one in Europe! Not until Borussia's players took their their lap of honour with the cup in their hands we began to realize what happened to our club and to everyone of Borussia's fans. We were eyewitnesses of a moment of history! A moment we will speak of years later, remembering that great day in May 1997. When we returned to Munich's centre we entered Weisses Bräuhaus again. As far as I can remember we drank a beer to every black and yellow hero: Stefan Klos, Jürgen Kohler, Matthias Sammer, Martin Kree, Stefan Reuter, Paul Lambert, Paulo Sousa, Jörg Heinrich, Andy Möller, Kalle Riedle, Stephane Chapuisat, Heiko Herrlich, Michael Zorc and very probably two ore more beers to "Dortmunder Junge" Lars Ricken! Some disappointed Juve Fans joined us and after a short time they had forgotten their bitter defeat and celebrated with us. A crew of Italy's TV company RAI entered the tavern and filmed our celebrations. I'm sure that some sequences of our party had been broadcasted on Italian TV but we never saw it. With regard to the high number of "Champions League Winner" – beers maybe it was better that we never saw it and as far as I know it was never broadcasted in Germany!

Next day we left Munich and joined the celebrations in Dortmund. The team presented the cup at Dortmund's town hall at Friedensplatz and Dortmund's city mutated into Partytown. A great day for Dortmund but also for the region "Ruhrgebiet"! One week before the team from the Gelsenkirchen suburb, Sch...e 04 had won the UEFA Cup against Inter. It doesn't bear thinking about what had happened when Borussia had lost the Champions League Final: a lot of malicious joy from Gelsenkirchen – but now Borussia Dortmund was the real European champion, the real European number one-team in 1997! Three days later Dortmund celebration days had their grand finale. At Borussia's last matchday against Cologne a helicopter dropped the Champions League Cup on Westfalenstadion's green. Jürgen Kohler and Kalle Riedle received the trophy and 55.000 fans celebrated Dortmund's most successful year since Borussia's formation in 1909. Number three in the league and Champions League winner in 1997!

After this highlight in our club's chronicle, also the peak of former president Gerd Niebaum's career we all know our club's history during the following years. It was the end of an era, Ottmar Hitzfeld left the club to continue his successful work in Munich. Several coaches followed, a lot of ups and downs for Borussia through the years and the big financial crisis for our club in 2005. But now Deutscher Meister 2011 - Borussia Dortmund has returned to the Champions League! So let's all cross our fingers for the matches of our young guns against Piraeus, Arsenal and Marseille!
The Champions League Final 2012 will be at May, 19th in Munich again! It's often been said "history repeats itself!" From us as Borussia fans there will be absolutely no protest or disagreement to these words of wisdom!