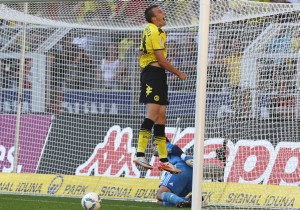 After a turbulent week, a defeat in Hoffenheim and several discussions about the sound attack, Dietmar Hopp and project Hoffenheim itself, it was time for football once again on match day 3 of German Bundesliga. And Borussia proved that the defeat in Hoffenheim was no bad omen at all by defeating 1. FC Nuremberg 2-0 (0-0). However, it was not an easy victory but a one you needed to take much effort in. The young guns did so, deserved to get the three points and extended their incredible series in home matches. With the victory against Nuremberg, the Deutscher Meister is now unbeaten for 18 days in the best stadium in the world.

Some personal changes could be made in the team of Jürgen Klopp since Neven Subotic and Marcel Schmelzer were returning from injuries to re-build the championship defense. The rest of the team remained unchanged, meaning that Milkay Bendogan once again formed the double six and Robert Lewandowski once again stepped in for injured Lucas Barrios. The best friend of blue-white scum missed Didavi, Nilsson, Frantz, Zeitz and keeper Schäfer who was replaced by Rakovsky, also a former player of blue-white. Former 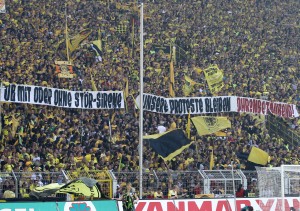 Borussian and Deutscher Meister Markus Feulner was in the starting line-up and – saying beforehand – one of the best if not the best player of Nuremberg. On the stands, the supporters of 1. FCN showed their sympathies for blue-white, the Südtribüne responded with chants ("Death and hatred to S04", "the day that S04 died") and outlined the fact that they could not stand Dietmar Hopp by showing specific banners. Let's hope that it was one of the last times we have to talk about Hoppgate. To be honest, everything has been said, Hoppenheim lost some public image and the official decision of the DFL is still left. Let's focus back on football and get back to the match against Nuremberg. 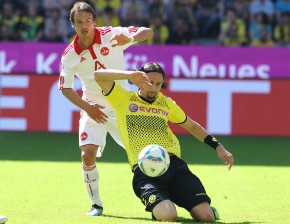 so. This lead to Borussia not getting many chances to score even though Götze missed the first opportunity of the match after just a few minutes when he made his way through the defense but missed the goal with his concluding shot. Even the fans on the stands on the Südtribüne left some space in their own performance. The atmosphere was great at the beginning and you could gain the opinion that it would be a great day, but the more minutes were played, the less noisy the Süd got. Don't understand me wrong, it was still a great atmosphere in Westfalenstadion, but it was not the best possible. Speaking of the best possible, Nuremberg had the best opportunity of the first 45 minutes when Hegeler ran away from Schmelzer and Weidenfeller was not consequent in his actions. First, he stormed out of his goal and even out of the penalty area before he decided to go back. In situations like this, however, a goalkeeper only has two choices – staying or running and keep on running. Therefore, Hegeler tried to lob the ball over our goalkeeper but fortunately enough, Roman managed to get his hands on the ball to save the situation. This could have ended really bad in minute 37. On the other side of the pitch, Lewandowski tested Rakovsky for the first time, but could not celebrate a goal at that time – but that was about to change in half two. 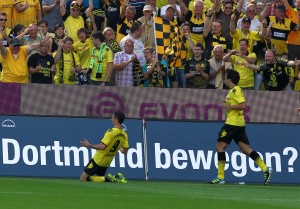 When we got used to the thought that the match against Nuremberg would not be as easy as some of the fans predicted and that we needed to be patient and the team needed to be highly concentrated in order to prevent Nuremberg from scoring an occasional goal, Borussia answered in the best possible way. The first really quick scene of the attacks of Borussia lead to Götze being introduced by Piszczek on the right side of the penalty area and the young gun perfectly assisted Lewandowski with a nice pass in the middle, the Pole stood on the six-yard box and left no opportunity for saving the ball – 1-0 Borussia and a big feeling of relief on the stands combined with a big beer shower for the author of this article (50th). Since Borussia was the active team on the pitch for the whole time, the lead was well-deserved. However, Nuremberg was not shocked by the goal at all. Just one minute after the lead, Javier Pinola took heart and his shot from the distance was saved by Weidenfeller. Speaking of shots from the distance, Manni Bender who did not get off to a good start in this match directly converted a Götze assist into a scoring attempt but missed the goal out of 25 metres (62nd). Substitutes Ivan Perisic and Kuba nearly doubled the score in minute 75 after a combination of the both ended up in a header by Perisic but just like in Hoffenheim, Perisic's fight against the German aluminium was won by the material. Three minutes later, another substitute – this time one of Nuremberg – nearly brought the equalizer when Wießmeier got to a header incredibly free in Dortmund's penalty area but for the good of us all, he could not get any control of it. Tension was still felt in the stadium, but a deflected shot out of around 25 metres by Kevin Großkreutz somehow found his way into the opposing goal – a lucky goal, but I didn't see anyone caring about that (80th). Nuremberg was done, the match was decided and nothing important to mention happened during the last ten minutes. 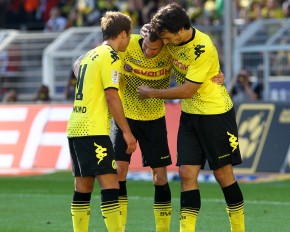 In my opinion, the victory about Nuremberg was a very important one after the defeat in Hoffenheim and one week before the match in Neverkusen. Borussia now has six points out of nine and the start in the season can be seen as a successful one. Furthermore, Nuremberg won't be the last team coming to the Westfalenstadion with the focus on defense and it is good to know that matches like this still can be won. Thus, Borussia is on a good way for another great season and it will be very interesting to see how the match in Neverkusen will end up next Saturday, 6.30 CET.

Jürgen Klopp: "Nuremberg did a really good job defending over big parts of the match and was initiative as well. It was hard work for us and we were more variable in the second half. It wasn't a lucky, but a deserved victory."

Dieter Hecking (coach Nuremberg): „To lose at the Deutscher Meister 0-2 is normal. However, today was not fully normal. A compliment to my team who really did a good away match." 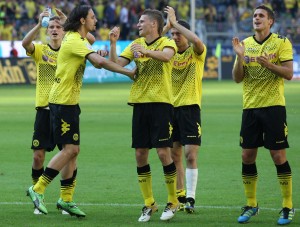 Subs: Wießmeier for Feulner (69th), Mak and Mendler for Hegeler and Cohen (77th)