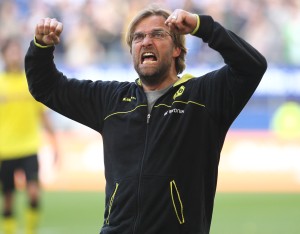 Over the last few weeks during the hard summer break, we took a close look on the squad that won the championship last season in such an impressive way. However, one man is still left to talk about. Without him, one could argue that the triumph of 2011 would have never been possible. Jürgen Klopp is not only the identification figure and fan favorite of Borussia supporters and whole Germany, he is also the man who made the championship possible. Therefore, our Australian reader Steven Chang (contactable at Twitter @Gixibyte) sent in this article about his view on Kloppo.

Following a string of disappointing campaigns, including the 2007/08 season where the club finished a lowly 13th, Borussia Dortmund was far from expected to challenge for the Bundesliga title, let alone run away with it, as the 2010-11 season kicked off. However, thanks to the intelligence, man-management, and flexibility of coach Jürgen Klopp, they did just that. 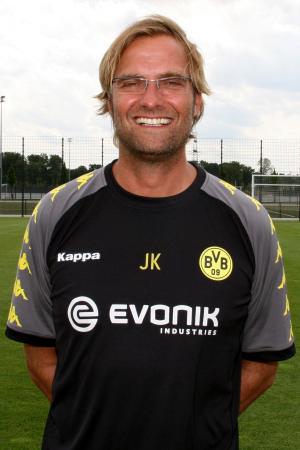 Klopp, a talented striker and defender in his day, made 340 appearances as a player for Mainz and eventually became the club's manager in 2000. He guided the 'Carnival Club' to their first promotion to the Bundesliga, but following the club's relegation in 2007, he joined Dortmund in May 2008. Having developed the club into title contenders, his proudest moment will clearly be guiding BVB to their first championship victory since 2002. Klopp has managed to win over the fans, not only because of his achievements, but also because of the passion he has shown for the club. Commentators and fans alike have taken notice of his vigor and constant gesticulations on the sidelines. He has himself admitted that he isn't one for "controlled behaviour on the touchline". After all, Klopp describes himself as "emotional and spontaneous". He likens coming to Dortmund as having "fallen in love again" and says that he "gets goosebumps every time" he sees 80,000 fans in yellow and black packed into the stadium.

Chief amongst his achievements is his successful focus on youth. With an average age of just 23, his Dortmund side was the youngest squad in the history of the competition to win the German league. Klopp managed to motivate and mould a young, raw, and inexperienced squad into a team of title-winners. The energy, speed, enthusiasm, and youthful spirit that the players displayed was central to the side's ability to execute Klopp's carefully crafted tactics. Some of the key players in which these tactics revolved around were amongst the youngest in the squad. These included Kevin Grosskreutz (23), Nuri Sahin (22), Sven Bender (22), Shinji Kagawa (22), Marcel Schmelzer (23), Mats Hummels (22), Mario Götze (19), and Neven Subotic (22). An important ingredient for the team's success were the tactics that Klopp employed throughout the season. Central to this strategy was, in fact, the lack of a "hard and fast" set of tactics. The extreme flexibility of Die Borussen's tactics allowed them to adapt to and defeat their opponents' strategies. Examples of this included victories against Mainz coach Thomas Tuchel's pressing tactics, and most gloriously, a critical 3-1 win over 2009/10 champions Bayern Munich and their approach of dominating possession. BVB's custom adjustment of tactics led well-known journalist Raphael Honigstein to argue that Klopp's approach "tantalisingly hints at a post-ideological future when there will be only micro-tactics left". 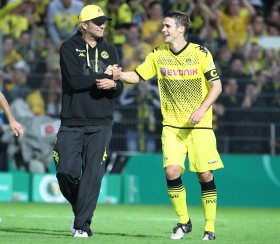 However, it would be an exaggeration to say that there was no general, overall character to the Dortmund coach's direction on the pitch. Anybody who consistently watched the team play would notice several distinct characteristics about its style. One of these characteristics was intense pressing whenever an opponent had possession, which required immense fitness from Klopp's young players. This pressing strategy flowed from Klopp's obsession with winning the ball back the moment possession was lost. This synergised with the team's signature lightning-fast counterattacks in numbers. You would see these moments in every match. Dortmund would press and win the ball from an opponent, and almost instantly, a swarm of players in yellow and black would surge forward – sometimes up to seven or eight taking on a handful of defenders startled from the quick transition.

Another of Klopp's achievements is that he structured his title-winning team so that it was not built around one, two, or even three specific players. Although several players were more important than others (Sahin and Hummels for example), the team was not built around their roles. It was a self-sufficient, fluid, collective unit where each player's position was interchangeable rather than static. Evidence for this is the spread of goals and assists throughout the team. Aside from striker Lucas Barrios' dominant 16 goals, the trio of Kagawa, Grosskreutz, and Lewandowski scored 8 goals each, with Sahin and Götze scoring 6 each. 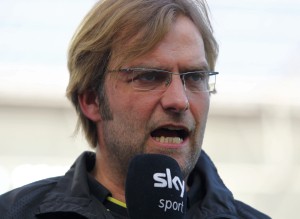 Although the loss of key playmaker Nuri Sahin to Real Madrid will be felt, the collective nature of Klopp's squad will hopefully soften the impact of that loss. Among the club's recent signings are Ilkay Gündogan, who has impressed with FC Nürnberg, and fellow midfielder Ivan Perisic from Club Brugge, who was voted 2010/11 Player of the Year in Belgium. In the run-up to the 2011/12 Bundesliga season, it is clear that Borussia Dortmund fans have utmost faith in Jürgen Klopp's tactical acumen, ability to nurture his youthful squad, and his passion for the club. They will be understandably confident that he is the man capable of leading Die Schwarzgelben to win two Bundesliga titles in a row again.