What remains of Borussia´s championship? III 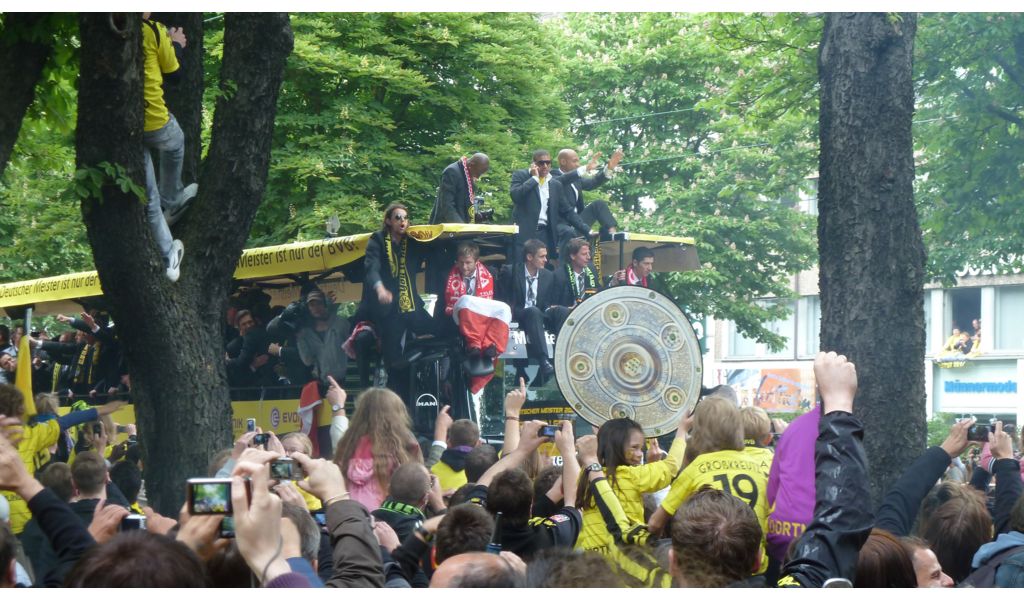 Now, more than one month ago we all celebrated Borussia’s win of “Deutsche Meisterschaft 2011”. A sensational season with sensational young guns, a sensational coach, exciting and dramatic matches, long days (and nights) with the “Schale” in our hands! And if you travel to other parts of Germany due to a private or a business trip nearly all people you meet, give you a pat on the back and congratulate on “Deutscher Meister 2011”!
Nearly all people? Well, in the area around Gelsenkirchen you may find some other opinions – but let them all live in their small bluewhite world! Compare our celebration for German championship to the celebrations in Sch…e after their cup win against second leaguer Duisburg: in Dortmund you saw between 400.000 and 500.00 people in high spirits! In Sch…e you found around 30.000 folks welcoming their team and the highlight of their “party” was a slap in the face of goalkeeper Manuel Neuer, who will leave the club in the direction of Munich. Absurdly? Anti-social? No comment!

But let’s come back to really interesting and enjoyable issues! During the last weeks the merchandising business is in full blossom: BVB-T-shirts, BVB-books and BVB-DVD’s currently sell well, and a Dortmund brewery is offering a Premium Pils with limited lables of our blackyellow heroes to collect. But beside wearing the “Deutscher Meister-Shirt 2011” 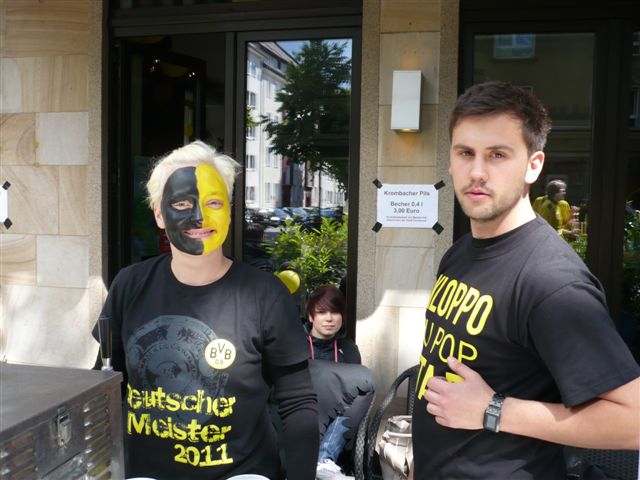 and thumbing through one of the new books, our personal impressions are also very important and in some cases really unforgettable! In addition to Steph’s and Web’s “adventures” in several Dortmund pubs some weeks after winning our 7th Meisterschaft: Part One and Part Two. I took a look at all the photos my friends and me had snapped during the days of celebration and a lot of great memories come immediately to my mind’s eye! Who will forget the perfect weekend from May 14th and 15th in 2011? None of us! Instead of that hairs go up on the back of our necks when we think about these days now, some weeks ago!

The atmosphere in Westfalenstadion after the final match on Saturday against Frankfurt was really one-of-a-kind! That more and more fans from the mighty Südtribüne entered the green after the final whistle was criticized, but to be honest, who should stop them? They were all on cloud 1909! So let’s all be glad that no one was injured! To get a small piece of Westfalenstadion’s green on that beautiful Saturday was surely an annoyance for Borussia’s greenkeepers, but in these moments a real treasure for fans. After the match Dortmund was a complete party town! I think there are photos and stuff enough for many pages, to describe all our impressions and 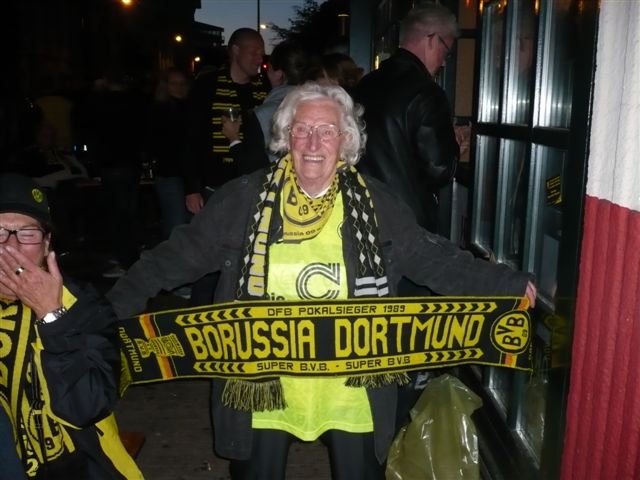 experiences. All around only smiling faces, some rouged in the nicest colours of the world, it didn’t matter if you were young or old. Proof enough that Borussia Dortmund is not only Deutscher Meister but also a fountain of youth is the more than 80 years young mother of a friend. The young lady celebrated together with us at the “Bürgermeister Lindemann” pub without any suggestion of fatigue. “Look at that lady…” I heard two young fellows say “…she must have experienced all 7 German Championships of Borussia!” Yes boys, you’re absolutely right! And we all hope that she will experience much more other blackyellow highlights in the next years!

This brings me to the end of this small report and to give an answer to the headline’s question “what remains of Borussia’s championship?” My reply is very easy because it’s only one word: Everything! And when we all take a look into the future, asking “could Borussia play such a wonderful football again in 2011/2012?” a window in Dortmund’s Kreuzviertel gives us the hopefully correct forecast: “Yes we can!”