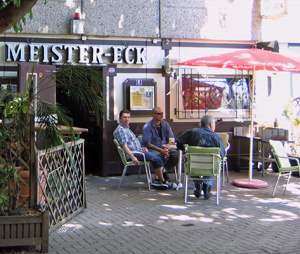 10 bars, two editors, one mission. Two weeks have passed since Dortmund's biggest party ever (ever! EVER!). Time to find out what has remained in the hearts of the people of Dortmund and what there is to be remembered forever. Web and Steph depart on an epic journey through Dortmund. Looking for the answer in Dortmund's bars. Down with the Nordstadt folks, down with the Kreuzviertel snobs and down with the Arabs of Schützenstraße. Find out what happened next.

Friday, May 27th, 6.09pm – Time to kick it off. The week has passed, the first beers are downed in the Meister-Eck, a traditional Pub right on the corner of Neuer Graben and Hohe Straße. On the walls you'll find autographs of Spinne Michallek, Borussia Dortmund's Meister from 1956 and 1957 next to original prints from WAZ newspaper back in the 70s. Historic place, but today the mood is tense. Sitting on a bar stool, the landlandy slams the bar door towards my knee, I adjust, take the exit to the bathrooms. Getting back she is hiding in the kitchen, giving her daughter a major bollocking. We down our Stößchen (0.15 liters of Dortmund's best brew) and get out as soon as we can. It is not the place to start talking Borussia today. (steph) 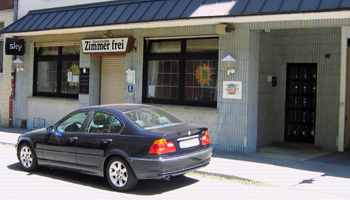 The plan is to drink our way down to Borsigplatz to reverse the journey Borussia has taken. Founded in the north of Iron City now playing south the B1 highway. We take it back towards the roots of the Ballspielverein to the quarter where two weeks ago the title was celebrated and where Borussia is still deep in the hearts of almost every inhabitant no matter where he is rooted. But first we take it up the Saarlandstraße to find the Pinte still closed, just too early for a pub that won't close before 5 a.m. in the morning. We choose a backstreet to find the Zimmer Frei, another of those Dortmund pubs that still looks like a Dortmund pub and not like some Bistro, Cantina or whatever is en vogue at the moment. The walls are decorated here as well. The special edition of Ruhrnachrichten from Meisterday 1995 catches the eye. But the dart club is focused on their training session and the guy sitting next to us is not very talkative. But the woman behind the bar is a big fan of Aki Schmidt's superhit Rubbeldikatz am Borsigplatz. She won't play the song though to lead our way, so after a couple of Stößchen we decide to take the northbound subway to Dortmund main station. (web) 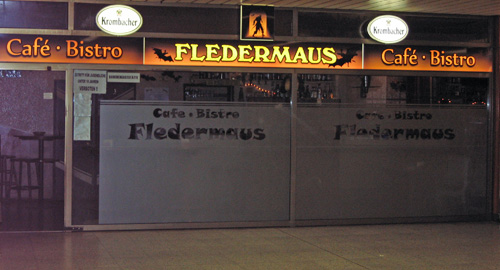 We are in all sorts of trouble once we leave the subway. If Dortmund was to welcome every guest like it welcomes us at the Hauptbahnhof, Dortmund would soon see a rapid decline in tourism. Located in the obscure underground walkway that connects the declining Nordstadt from the once flourishing and today at least not shrinking city centre is the Fledermaus. "Never been there", I explain to web and "never want to go there" I continue but web insists on starting the hard way. We enter the underground location "Fledermaus", were some sneaky Bada Bing business is going on. The two other guests have their belongings in a discounter bag. I again retreat to the bathroom, it is there you find out what those places are all about. This one is about a single urinal on a gallery, which you enter through a western style swing door. A mirror lets you have a look at things you always see. Back to the main room, which is not bigger than the smoking rooms at Washington Airport. Web has already ordered a Stößchen. But as we take our first sip, even Web admits we should have never entered this place. It is dreadful. I ask the barkeeper about the Meisterschaft. He replies there has never been such thing as a Meisterschaft, or at least nothing ever stayed in his heart. Time to leave the princes of darkness. We head outside. Northbound. Münsterstraße awaits us. (steph) 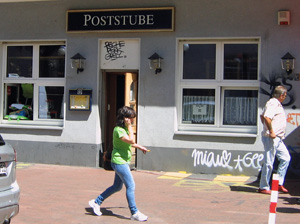 Münsterstraße, the multi-cultural shopping promenade of Dortmund's northside. People go about their business outside, an African lady prepares for the upcoming Münsterstraßenfest by dancing in front of an empty stage. The dubious brew served at the bat-cave left a strong aftertaste in our mouths so we are in desperate need of some proper Pils. We choose the Poststube which welcomes us with banging Schlager music coming out of two big boom boxes hanging from the ceiling. We order some more Stößchen. While Steph examines the rest rooms once more, the bartender is ordered to turn it up even louder by the guests that seem to be some beers ahead of us. But that is a challenge we are taking gladly. More beer please. The pub window is decorated with toys. On closer look they are for sale. It seems that some of the guests are selling their kid's toys to cover their tab. Kind of sad but not our problem tonight. No use trying to talk to anybody here, because it is just too loud. The elderly ladies at the bar leer at us, but we have to focus on the mission. That gets kind of hard when you can't avoid dancing with them. We also master that challenge, but then it is time to bolt. When we try to pay we discover an ancient BVB poster hanging on the wall behind the bar. There is no avoiding the mighty Borussia anywhere, it seems. The barmaid mistakes Steph for blue scum and before things get dirty, I push him back to the street. (web) 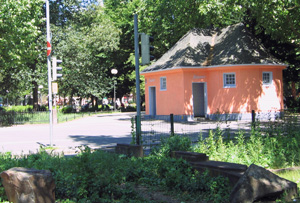 We run as fast as we can, see a BVB flag hanging outside a window in the house opposite. A sharp right turn directly sends us into a Trinkhalle, those special places where you can get hold of basically everything. We have no plans to buy everything and grab a Kronen each. This should give us some relief. All those ladies will not be looking for us in here. We walk towards the Nordmarkt on Mallinckrodtstraße. The Nordmarkt, back in the 50s and 60s, used to be a good market place where people from all over Dortmund would go and buy food. A few years ago however the Nordmarkt had turned into a devastating place. Junkies would shoot up, drunkards would get drunk and the good old day had turned into a nightmare not only for Dortmund's city planners but also for the families living there. But whereas Nordstadt's downfall is only slowing stopping, the Nordmarkt square itself is on it's way up again. As we find out, when sitting down to drink our beer. We have a look around and discuss whether to approach the fellow with the BVB scarf, who'd later be found sleeping on one of the benches. We decided not to and are greeted with two guys and one woman showing us their ID cards, Public Order Officers, who patrol the Nordmarkt. We are sitting on a playground, unintended of course. Instead of paying a 35€ fee, we move over to the bench a few meters away outside the playground boundaries. The woman tells us about how it has all changed here. Nothing much happened here on that weekend a fortnight ago, she tells us. Head towards the Borsigplatz, she adds. It is our direction anyway. While the Public Order Officers chase someone taking a leak, it is our turn to head for some food. A great Döner is waiting for us, just one block away. (Steph) 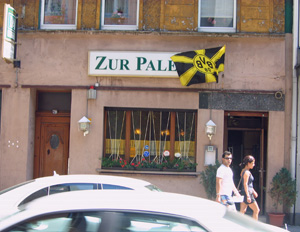 On closer inspection we find out that Yüksel Grill once the finest source of Döner in all of Dortmund has become huge. It looks like a big bakery with a fine restaurant attached to it. We decide that food is highly overrated, set our mind back on the mission and head towards a small bar up Nordstrasse. In there people are talkative but it seems they talk about everything but Borussia. One of the guests tries to shock us by claiming to support Gelsenkirchen but we can't be fooled even on the kind of beer level we are on by now. Next he forces me to admit that I cried when Dede presented the Schale on the Borsigplatz, but I was not the only one. That was enough for Olaf. He says "Hasta la vista" and leaves. Now the next guest, more the silent type, claims he is an Olaf, too. But once again we can't be fooled. We rather work our irresistible charm on a 61 year old woman from Lütgendortmund that looks rather like 81 and claims that she is still coming all the way back to the Nordstadt to visit her favourite pub. We realize that there is no way to find any championship spirit here and finally head on to the mythical Borsigplatz. (web)

Once we reach Borussia's birthplace we continue our quest in the hardest of circumstances. Find out if we could find the spirit, if one of the old charmers could pull one of us and where the next level of escalation led us to. It does not get better but it gets much much worse in part two of our fantastic journey.