Borussia Dortmund and the Milestone 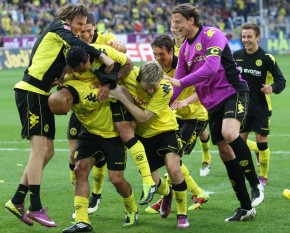 In a time not too long ago, a young club with magic players was looking for a special stone. On Sunday evening, it was finally found in a fortress known as the Westfalenstadion in Dortmund. This special stone was the milestone on their way to endless glory, shining gold and a tiny salad bowl. Of course, this special club was located in Dortmund as well and its name will probably be known as the German championship winner of 2011 – Borussia Dortmund, forever number one!

Over the whole week, the tension around Westfalenstadion and around all fans of our beloved Borussia was high. Rumors about a possible transfer of midfield star Nuri Sahin, the ticket lottery for the last match against Frankfurt (an incredible number of nearly 400.000 requests for only 20.000 tickets) and the missing of top goalgetter Lucas Barrios, combined with the fact that we lost a big part of our lead to Neverkusen brought a feeling not of despair but of some kind of fear to our fans. 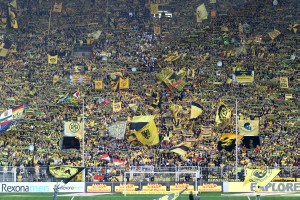 However, it all turned out to be fine just after seven minutes have been played in Munich, when Bayern helped us not to worry about our nerves in the season's final moments and gained the lead against Neverkusen and never gave it away but increased it to an astonishing 4-0 until half time. Many fans watched the first half of the game before travelling to or standing in the Westfalenstadion, all of them could find their place in the stadium more relaxed, more comfortable.
But let's stick to our match since we had a tough opponent (at least, on paper) to beat. As mentioned before, Super Lucas missed due to an injury and will hopefully be back next week in Mönchengladbach. His place in the front was taken by Robert Lewandowski, Kuba took the right spot of the midfield. It was the line-up the fans could expect. Freiburg had to replace three players with Bastians, Bechmann und Krmas out. So everything was ready for the finding of the milestone. With a victory against Freiburg, we would have been eight points ahead of Neverkusen, with only 12 points being left to gain.

Let's start with an observation you could make over the whole 90 minutes. The result coming from Munich was a big help for our Borussia. You could see, you could feel that our players were relieved and in some way playing without any pressure. They just had the will to succeed, the will to find the milestone, the will to make the big step directed to the championship. With a victory of Leverkusen in Munich, it would have given another picture, I'm pretty sure about that.
But with Borussia being relieved and Freiburg being harmless for most of the time, it was our match. Even if it took some time for BVB getting the first chance, it was worth waiting for it. Kuba (who had some of his better days after writing history in the first match against Freiburg of this season) exploded on the right side of the pitch, his cross was perfectly used by Super Mario Götze who left keeper Baumann no chance in hell and scored for the sixth time this season (23rd). 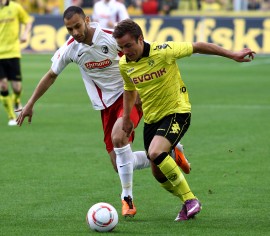 Again, you have to point out the fact that this young guy is only 18 – in words: eighteen – years old and playing his first season in the German Bundesliga. Incredible. Incredible is also the right word about the next scene of the match, because only two minutes later, the fans on the Südtribüne were ready to celebrate but Lewandowski and Großkreutz struggled with themselves in the middle of the penalty area and somehow, the ball went over the goal (25th). Before the break, Lewandowski had two small chances and one shot by Kuba was blocked by the opposing goalie, before a big mistake in the defense of Freiburg made the second goal possible. Lewandowski used Toprak's mind being already in the break and while some haters on the Südtribüne were saying that he will miss this one as well he proved them all wrong, ran away with the ball and managed to score (43th). Already his seventh goal of this season – don't call him a new Nelson Valdez. With that being said, it was time for half time. Everyone was happy about the result, the next stones fell off the hearts of the supporters of black and yellow and Borussia was eight points ahead. What a perfect Sunday!

At this point, I could write about some minor happenings on the pitch and ignore what happened on the stands. No, I could not. It was all about the atmosphere and less about the game which went on like in the first half – Borussia being dominant without having too much chances, Freiburg being harmless. But at some point, I catched myself not looking at the pitch anymore but absorbing the atmosphere. Not only chanting, but also witnessing everything that happened. The fans being happy, singing about who will become championship winner, everyone celebrating Leonardo Dede for everything he does (quite saying at this point is that all seaters stood up when Dede passed them for his warm-up, even Freiburg fans applauded to the Monday anniversary superhero of Borussia). 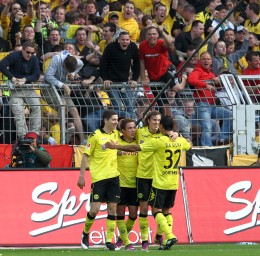 And when the La Ola wave finally found his way to the ENTIRE stadium (after singing that all german championship winners should stand up) with the away fans doing their part for the atmosphere taking part in the wave and I transformed from one goose bump to another, we scored for the third time. Götze stormed the right side of the pitch, saw Großkreutz running right beside him, the two played out Baumann and the Dortmunder Jung decided the match with the 3-0 (78th). Until the final whistle, Weidenfeller had his time to shine two times and brilliantly saved twice, but this was hardly noticed by anyone because everyone's eyes were on Leonardo Dede again. After his substitution was asked for by the fans, Jürgen Klopp gave us what we wanted and accompanied by a big wave of applause, he was brought in in minute 83. The biggest emotional part, however was still to come. After the whole team celebrated with Dede, trempling him to nearly death, he climbed the fence to celebrate with his fans. Quite a tough time for Dede at this moment cause you could see him crying several times over the last few weeks. However, I still ask myself how the celebration with Dede should be topped on the last day when he is officially sent off. Probably, everyone in the Westfalenstadion will be crying and remembering a great player, a real Borusse and a man we will never forget in Dortmund! 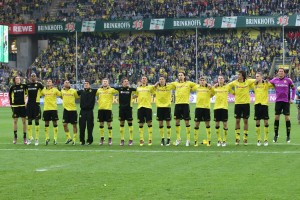 So Borussia found the milestone in Westfalenstadion and now has the opportunity to become official German championship winner on Saturday evening in Gladbach. If Neverkusen manages not do defeat Hoppenheim, a victory would lead up to the moment we all have been waiting for for quite some time now. However, Nuri Sahin will miss the last matches due to his injury he suffered in the first half. But since chances are good that he will extend his contract with Borussia, we will see him playing in the Champions League next year again. My final words for that perfect Sunday: Thank you, Borussia! Thank you for being what you are, the best team in Germany right now. Little thanks to Munich for beating Neverkusen and big thanks again for 13 years of real love to Leonardo Dede!