That song in us 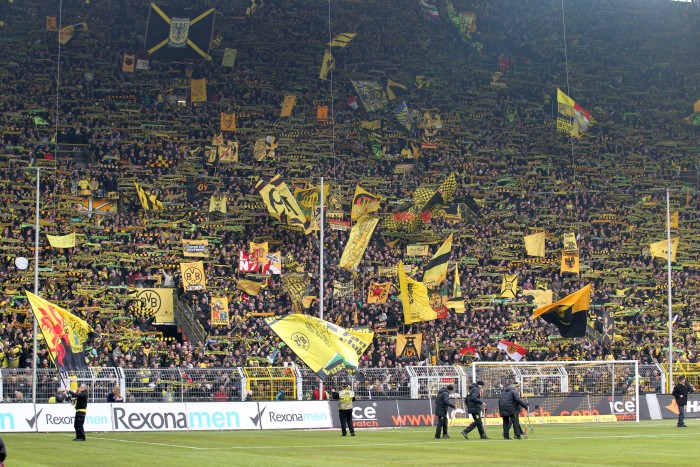 The 30year old swimmer Maria is sat in the transit area of Aeropuerto de Ezeiza in Bueno Aires. She is waiting for her connecting flight to Chile. She is never going to reach Chile. As she hears a mother singing an old Spanish nursery rhyme, she starts falling to pieces. She sings along, even without knowing the language all the words flash into her mind. She reaches the restrooms and starts crying her heart out. Getting back into the transit area her connecting flight has long taken off. Aroused by her feelings she starts to search for traces. It is only a matter of time, she finds out she belongs to Buenos Aires. She was born there. Maria finds the truth, abruptly her life changes. 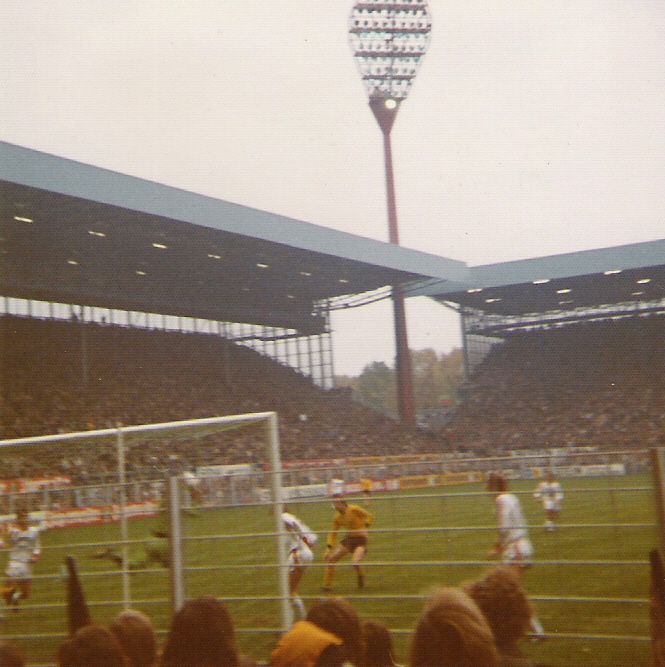 The story German director Florian Cossen captures, set to scene in gloomy pictures in the Argentinean capital, has happened to most of us in one way or another. Of course, we were not sat in the transit area of an airport and the emotional force it hit us with might most likely was not of such a tragic fate. It was a slow process, but its development resembled the enlightening of Maria, embodied by glorious Jessica Schwarz in Cossen's debut "The day I was not born". We all heard that song in us at some stage and got hooked to its peerless sound. From that day onwards, the song never left us. Week after week, when we are not going through the nerve-wracking summer break, we wake up on match days and remember that song and our first faint-hearted encounter with our destiny. We recall the power of its love that captured us in the end. All of a sudden we had become part of a family. A family, that was so much bigger, than everything we had ever seen. The love we felt for that family would never leave us, we felt it. We knew we would run into bad times and maybe we would let go of the family for a while but its unseen magic would always pull us back home. We were sure of that. 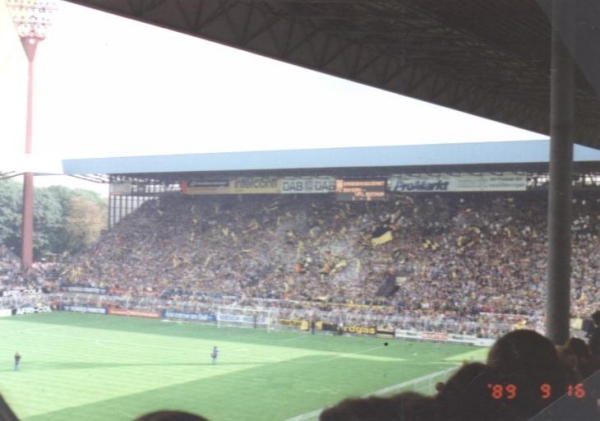 Parts of our family lived through the agony of the second league during the 70s, others joined during the fickle 80s and most probably found their way into the bosom of the family during the spoiled by success years in the 90s. Nobody could have foreseen the heavy sea we were sailing into. We nearly drowned during the noughties, the voyage had just become too rough. Our megalomania turned into depression within a few weeks, our tissue of lies fell had fallen apart. But even during those years a new generation was born. They knew our past success from history books; maybe they had witnessed our final convulsions in 2002. They went onto their very own journey. They revolted against their old man and conquered their place on the tribunes. Sometimes they ran riot, like pubescent kids simply do. But as we ran our coach out of town, we all got carried away. Painful years were followed by even more painful years. Until we all plucked up our courage and took our last chance to turn things around. We felt better then, we got louder, the song in us was back on match day mornings. We did not trudge into the stadium to undergo punishment. One question had been with us during the painful years. What have we done to deserve this, but we all knew what we had done. Pride comes before a fall. And falling down was no fun. It took a lot of time realizing this and we could only get rid of our arrogance after the big shock. 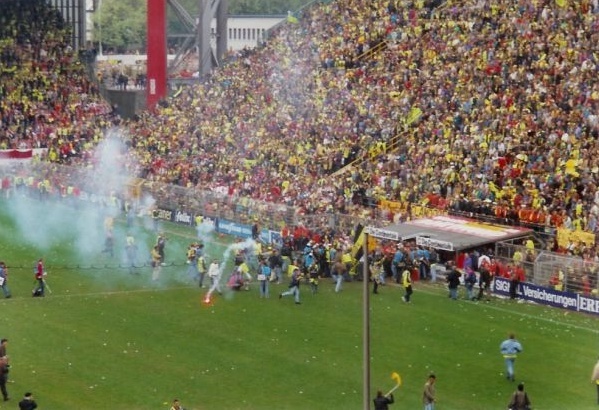 Finally, the suffering had ended and we were still all there. With a smile on our faces we went to the stadium on match days. They had promised us pedal to the metal entertainment and we got it. The next two seasons the team got young, the entertainment got even faster and with the start of this season it was too fast for our opponents. Most of them were hospitalized after 90 horrible minutes which left them with giddy spells. They did not know where to defend against the new force, let alone did they know how to score a goal against the force we were. No mysteries for us, we followed the team to wherever they travelled to, fraternized with them and in their rare weak moments we pushed them forward. With impressing volume all of our songs joined to one mighty choir, sometimes furiously singing against the opponent only to brutally boost the Young Guns on the pitch with a crack of the whip. We had made a name again. On the tribunes and on the pitch. The Young Guns were besieged with praise and they tried to lull us. It was not long until they succeeded. Our standards had gone sky high again. But going sky high is never an option, we were remembered. We would not lower our sights and dreamt of things to come, we had again lost sight of the here and now.

When we scored we were singing but mostly we kept quiet as everything but scoring was an utter disappointment for us. We had lived through the agony of the 70s and celebrated the Cup win during those fickle 80s, we had savored the big triumphs in the 90s and even had won at title during the horror decade, and it was our right to herald the start of the wild 10s with a title. Everything but a title would be considered as an affront. 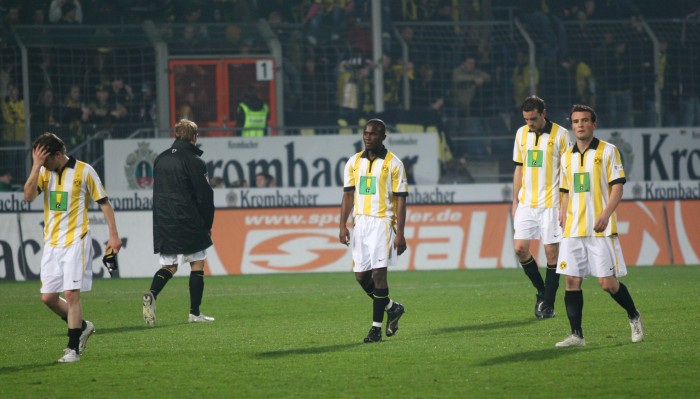 Our thoughts were on where and how we were to celebrate that title and forgot about the wonderful enthusiasm on match days. We trudged into the stadium again and were waiting to be served in our away matches. Those Young Guns would do business on the pitch; there was no need to support them anymore. But then things turned ugly. The Young Guns hesitated; seemingly they had relied on us and their very own strength. The opponent bothered us again with wild passion, something we were not able to tolerate. Would we blow it? The big party? The big party, we had 400.000 times invited us to. The big party, some of us already had sold their soul to the devil to? We had two options. We could either be offended or we could remember that song in us. We choose the latter, which at times wasn't that easy but when we cornered and media started writing eulogies on April 2nd with brutal force a violent storm whipped through our living room. It entered the stadium on the Südtribüne and pushed the ball direction north. The youngest gun was not able to withstand the gale and turned toward the north when running direction east. He floated through five defenders and after endless seconds the final touch relieved us from our pain. On and on. Only think about the next move. A few minutes later Dortmund exploded. We remembered other moments of salvation. We all knew this again was one of those moments. Somewhere out there that song resounded inside a few minds and would never disappear from now on. 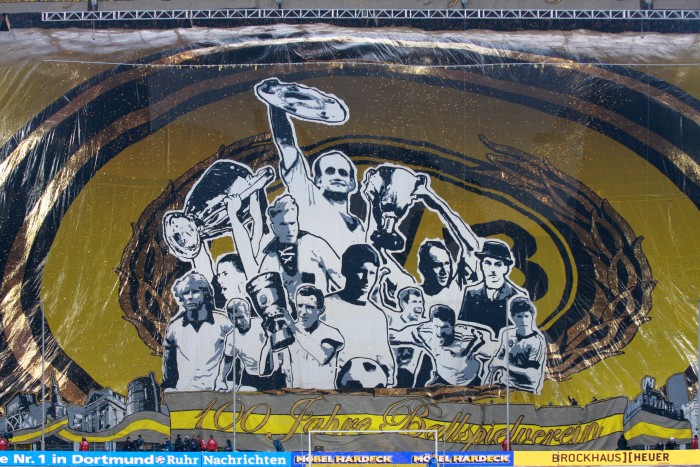 That day we said goodbye to an important part of our family. He is going to leave the family for a while but will forever be part of it. We did not feel ashamed of our tears and did not want to see him go. Even if he was to show up a few more times, we treasured that second on Saturday, April 2nd 5.19pm. We knew this second was never to come back. Days later this moment is still very much present in our hearts and we know it will stay there for years to come.

With only five weeks left until the end of another season we are standing in front of an unsolvable task. We cannot allow ourselves to be taken in by the endless opportunities those five weeks leave us with. We have to be there for the Young Guns, they need us as much as we need them. We cannot allow ourselves to get carried away by the thought of the Young Guns falling apart at one point or the other after this season. This is eventually going to happen. There is no way for us to stem the tide. We should not allow ourselves to sail into heavy sea during those five weeks, we would again drown. We need our passion, our breathlessness and our empathy. Only after those five weeks we can remember and let go of this season. Only after those five weeks we can recover. The summer break is going to be one hell of a summer break. But until then we should take April 2nd 2011 as our example and listen closely when waking up on match days. They are playing our song. Again and again. The song in us. Listen to it. It's worth it.