A weekend to forget 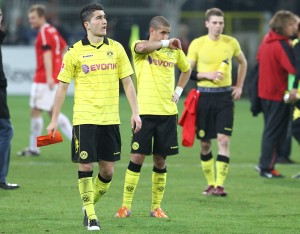 To begin with, for all of you who could not see the game, let me tell you: you didn't miss out on anything. The effort the team had put into this game was simply not enough. What remains are questions that may not be answered today but surely by the end of the season. Certainly, however, is the fact that we don't need to start planning the Championship celebrations, that we don't need to talk about the Championship in general, but that we need to concentrate on the next game again. With seven games remaining, there are still a lot of points to gain, but also to lose. Let's not get ahead of ourselves. Modesty was our big strength throughout the season, let's go back there and see where it takes us. There was a lot going on throughout the past week, the painful news about Dede, Hummels' new contract, the Championship celebration and then there was also Mainz.
With Bender being unbreakable and Hummels having recovered, Dortmund started out with the usual formation of the defense. In the offense, Jürgen Klopp decided that it was time to give Kuba the chance to prove himself from the beginning again. This meant that Götze took over Lewandowski's position in the center while Kuba inherited the position of the right wing. With amazing spring weather and a setting sun, it was time to play some football. Let the games begin. 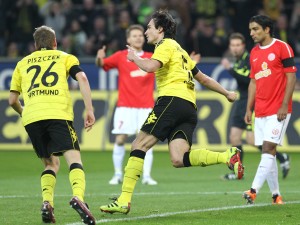 After a minute's silence for the victims in Japan, the game between the first of the table against the fifth of the ranking was about to begin. The mood in the stadium? Rather average. Dortmund as well as the 7000 people from Mainz did not really manage to create the atmosphere that the promising game held in advance. It was either the mood from the stands that devolved on the pitch as well or the other way around. From minute one, the game was scatty. Mainz was outgoing and did not give the impression that they intended to hide. After the defeat against Hoppenheim, Dortmund, on the other hand, presented themselves eager as well. This resulted in an intensive game that was mainly battled in the center of the pitch. Cautious scanning was the impression of the first minutes. After six minutes it was Mainz who offered Weidenfeller the first warm up of the game. A freekick by Schürrle was saved by our keeper. It should not take long until we were able to celebrate though. Again, it was a freekick that opened the chance to score a goal. Hummels said thank you and managed to get the ball into the goal. From the Southtribune, it was rather difficult to realize what exactly had happened. The ball appeared to be behind the goalline. The referees decided the same. But how exactly? Never mind, all we cared for was the 1-0 for us. Later on, we would find out that it was actually Hummels back that had scored the goal. A goal that should be characteristical for the game that would follow. Somehow, the ball was inside the goal, this seemed to be the agenda that our players followed throughout the rest of the game. No real structure, no real force inside the duels, something was missing. But still, it seemed like we could have gotten lucky again only ten minutes later. After a nice pass by Nuri Sahin, Barrios stormed into the penalty area. 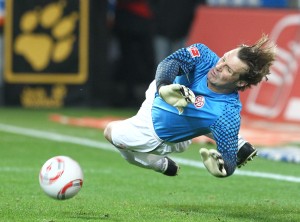 Mainz' keeper Wetklo stormed out rather brutally and hit Barrios over. The outcome of that? Penalty kick for us and Barrios knocked out. So far nothing unusual, even though we were definetely worried about Barrios. While he was taken care of aside of the pitch, the so called referee Brych from Munich decided that there was no need to give Mainz' keeper Wetklo the surely deserved red card. Meanwhile Nuri Sahin took the ball and honestly, that was not a smart idea to begin with. Every once in a while, Nuri Sahin had given enough reason why he should step aside when it comes to penalty kicks. His altitude is certainly not the best. But then again, who else should take care of the penalty kicks? The young Götze? Probably very nervous as well. Barrios would certainly be another option, but then again, he was struggling with his injury outside. This is certainly a topic that needs to be discussed in practice, but not here today. Anyway, to make a long story short: Nuri Sahin's penalty kick was miserably shot and Wetklo had no difficulties clearing the ball. By now, the mood on the stands was pretty much around non-existent. It might have been the disappointment of the penalty kick. Maybe even the fact that there was no real change in the game after the poor performance in Hoppenheim, but maybe it was simply the oversaturation of success. The songs that were sung on the stands were pretty much as boring and uninspired as the effort that Dortmund presented down on the pitch. The next low point of the game resulted in Barrios being taken out injured and Lewandowski stepping in for him. A little bit of hope in dreadful moments since Lewandowski tends to score after coming in, especially on his favorite position. Up front.
This hope vanished soon. Nothing changed. The game was terrible. Terrible to watch, terrible to describe, simply not good. At some point the idiotic referee would whistle for the break. 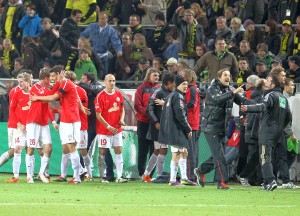 You would think that the second half would get any better. If only a tiny, tiny bit. Wrong. The second half continued in the same frustruating way the first half had ended. Nothing happened. Neither on Mainz side, nor on our side. This was football to overcome. As quickly as possible. I could tell you about minor, minor chances on our side, but then again, they were not even worth mentioning. Let me tell you this much, we mananged to come close to the penalty area every once in a while. Any danger for Mainz? No. And while the people on the stands seemed to have fallen asleep, there was actually some action going on on the pitch. Mainz scored. After Weidenfeller had not saved the ball in a clever way, he was lucky that Allagui was standing offside. The goal did not count. Other than that? Nothing really. It seemed like we had to wait 90 more minutes in order to witness something, well, something again. We are telling the story of the 89th minute of the game. After Subotic was hit at a very special place between his legs from a very short distance, he dropped to the ground. While lying there in awful pain, Zidan lost the ball in the center of the pitch. What followed were minutes of unsportsmanlike behaviour from Mainz side. Even though there was one of our players lying on the ground, they did not stop their game. Subotic was then missing in the center of the penalty area which gave Sliskovic the opportunity to score. And he did. The heated discussions that followed afterwards were probably justified. It is simply unfair to continue the game when a player is hurt. The conquer of the ball on Mainz side was around centerline, there is really no reason to say that they were in the middle of an attack and weren't able to stop. Simply ridiculous. Borussia Dortmund 1, Mainz 1 one as well. Game over. 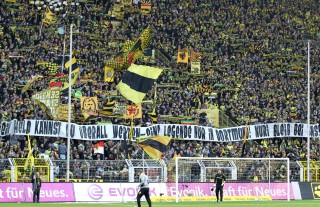 Mainz' game towards the end was less than unfair but still, it is farcical to say that this special scene at the end of the game was the reason for our... well, it feels like a defeat. Dortmund should ask themselves whether their effort today was worth the effort of a Championship winner. It is alright to lose a game, and it is alright to play a tie, but for once, I have to admit that this way of playing will not be enough for the rest of the season. Some players seemed to be lost between "I don't want to", "I don't feel like", "I've proved how great I am, I don't need to do more" and "I am nervous". I don't want to point out special players today, but some of them need to question themselves and their attitude of the past weeks. It might be a wise idea to stop planning and stop talking about what may be on the 14th of May. Let's go back to how we were a few weeks ago. Let's show how much we enjoy football. Both the players and us fans. Because our effort on this day was just as bad as some players effort. All in all, a weekend to forget for all of us. Or maybe to remember, but only in order to learn how to do it better next time. Come on BVB, 7 points is still a big advantage. Let's use this break in order to take some breath and then attack again.