Mallorca and Borussia ? a perfect combination! The perfect day Vol. 2 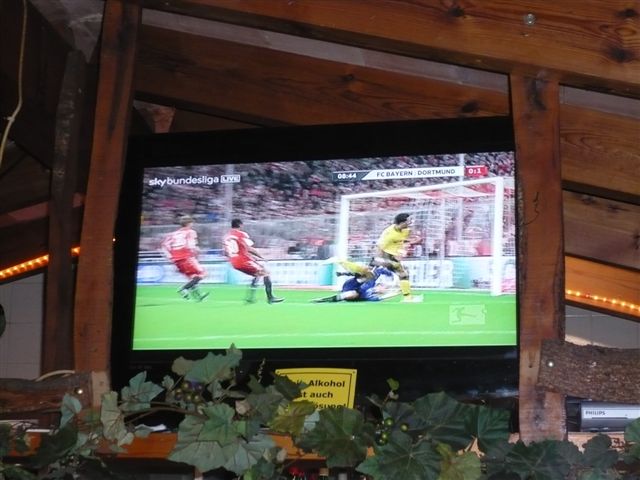 Maybe you have read Ida’s report “The perfect day – for many reasons” about our glorious victory against Bayern. Borussia’s fantastic 3:1 after 20 years without a win in Munich is one of many heights during this season. Here’s a small addition to that great Saturday evening. It’s our short story how 5 Dortmund supporters experienced the match live on TV in Mallorca. For us it’s an additional reason why this day was really the perfect day!

From the end of February until beginning of March, Andreas, Johannes, Wolfgang and me booked a short break for one week to Cala d’Or, Mallorca, Spain. Cala d’Or is located at the East coast of Mallorca and in February the village is a little bit like a “ghost town”. Only few tourists but many closed shops, restaurants and bars which will be reopened in the beginning of the peak season in April/May. Last year we also stayed for one week in Cala d’Or nearly the same time and we got the recommendation to watch the match Sch…e 04 against Borussia Dortmund on TV in the small pub “Paul y Belli”. We went to the pub dressed with our black and yellow scarfs and t-shirts and sadly saw Borussia’s 1:2- defeat in Gelsenkirchen’s gym. But in spite of the bad result, the atmosphere in the pub was great and there was no doubt for us to watch the match Borussia against Bayern again at “Paul y Belli”. But this time our decision was clear: No scarfs and no t-shirts! Let’s try it to see a win in our regular street clothes! Was that superstition? Yes, without any doubt it was! But I think we are not the only fans who combine football very often with superstition or various oracles! 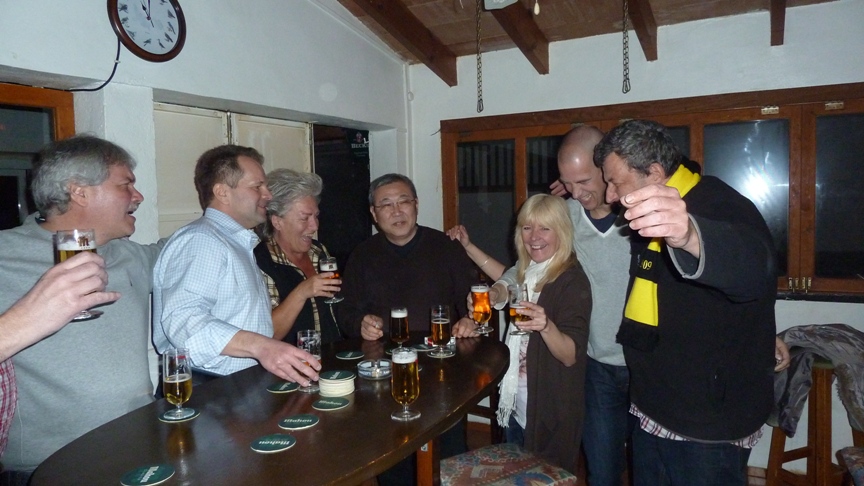 Landlord Stephan (a Bayern supporter!) from “Paul y Belli” recognized us from last year’s match against Sch…e and the day before our match against Bayern we reserved four barstools in front of the TV. So everything was well prepared when we entered Stephan’s pub on late Saturday afternoon. The first beers and Stephan’s delicious “Currywurst” put us into good mood before the match. Shortly before the kick off another Borussia fan entered “Paul y Belli”. It was Carsten from Münster a black and yellow scarf around his neck. Carsten also knew Stephan from former holidays and the first thing Carsten did was giving Stephan a pennant of Borussia with original autographs of some Borussia players. A few seconds later the pennant had been fixed at the wall. A reasonable facelift for “Paul y Belli”! Now we were in total five Borussia fans, and landlord Stephan was the only Bayern supporter! Maybe a happy omen? It’s needless to report about the match in detail. We all know the result. Lucas Barrios made us happy in minute 9 and after Luiz Gustavo’s equalizer it was landlord Stephan’s time to cheer! The perfect answer to this only a few minutes later! Nuri Sahin’s 2:1 hammer and another round of beer came at the same time! Second half it was again our time for jubilation! Mats Hummels header made us happy for the rest of the evening! For the rest of the evening? No, doubtless for this and the next weeks! Borussia won 3:1 against record champion Bayern and they dominated absolutely in Bayern’s Arrogance-, sorry – Allianz-Arena!

“The result is OK! You were the better team! Let’s drink another round of beer and a round of Hierbas!” was Stephan’s remark after the final whistle. Great idea from a real good sportsman! We didn’t deny it and to be honest it wasn’t our last round and Stephan wore Carsten’s BVB scarf with a good sense of humour. The symbolic handover of the “Meisterschale” from Carsten to me was one of the final highlights of this great evening. The “Meisterschale” was only a tray for beer, but who has doubts that on May 14th our black’n yellow heroes will hold the real “Meisterschale” in their hands? 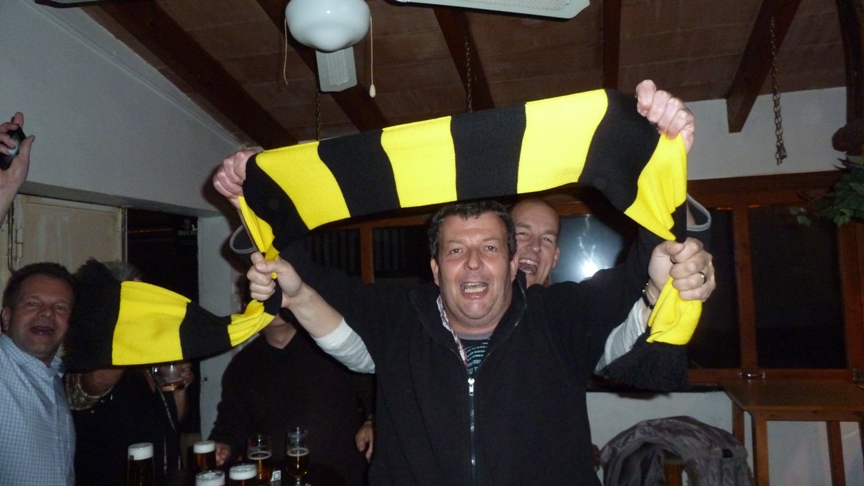 Why did I write this small report? It should neither be an advertisement for Stephan’s pub “Paul y Belly” (although he deserved it) nor an invitation to enlarge one’s individual alcohol consumption! It’s a report to reminisce about an amazing evening which will be for ever in our minds! For sure in some years when we will talk about Borussia, this evening will be a special highlight in our private BVB chronicles. And when we will talk about Borussia’s matches against Bayern in the future, one question will be an essential part: “Do you remember our amazing 3:1 win, we watched at “Paul y Belli” in Mallorca? I’m sure, no one will forget it!

Thank you Borussia, thank you Stephan, thank you Carsten and thank you all at “Paul y Belli”!