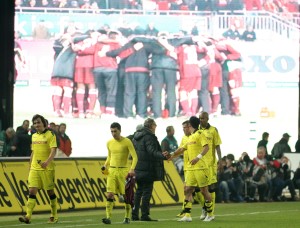 Sometimes, there are these games where you can forget about the 90 minutes which have been played because your team somehow managed to score the decisive goal and gained three points. On Saturday evening, at around five past eight German time, everything seemed like it would be just the case. However, ten minutes later, the end of an emotional rollercoaster resulted in a 1-1 (0-0) in Kaiserslautern. Borussia is still undefeated, but lost some ground to what is called haunter like Leverkusen and Bayern. It was not the most shining match of our team and the second consecutive tie in a row. Moreover, Borussia was without having scored for about 190 minutes... crisis is calling in Dortmund. At least, that is what everyone whishes.

Neven Subotic was back in the starting line-up after being booked for the fifth time and missing the derby. Therefore, "Tele" Santana found himself on the bench once again. Kuba had to be replaced (because of some knee injury) by Lewandowski, who played the offensive midfielder while Götze changed to the right side.
Kaiserslautern was missing Dick, Kirch and Simunek, but former Borusse Martin Amedick was back in the team – and played a decisive role in the defense of Kaiserslautern. 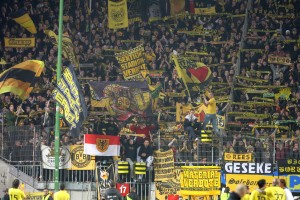 The game started with an early wake-up call after a nice combination of Super-Lucas and Lewandowski. Barrios screw up his courage and shot from about 19 meters, but the ball only hit the right post. It was the 16th time of the season that Borussia hit either the post or the crossbar. Probably, the match would have gone on totally differently if we had scored in that fourth minute, but it's no use speaking in if-sentences. Furthermore, Kaiserslautern hit the crossbar only a few seconds later when Tiffert tried to beat Weidenfeller from ca. 30 meters. If the goal had been positioned half a meter more into direction of the stands, Kaiserslautern would have had a reason to celebrate – but again, it's that thing with the if-clauses. Let's stick to the facts and the two big chances for Kevin Großkreutz which can be seen as a perfect role-model for the match on Saturday. The Dortmunder Jung had two promising opportunities but instead of ending the attack with a shot, he twice decided to make that last step which went wrong in both cases (20th, 22nd). Beforehand, Weidenfeller showed his class by rescuing against Ilicevic in a one-on-one situation. All in all, Borussia had the best chances in the first half but Barrios missed luck and Großkreutz the courage to shoot. Suddenly, memories of the derby or the match against Stuttgart came up again and one was afraid that this match would not turn out to be excellent for Borussia. 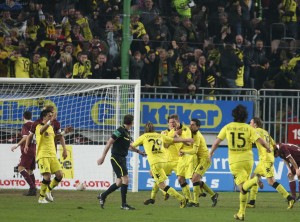 The second half of the match was one of the worst halves of this season. There wasn't much action coming from the sides and Borussia had no real ideas what to do against the fighting defense of Kaiserslautern who deserved some accolade and respect for keeping up against one of the best offenses of the Bundesliga. However, Götze had to be awarded a penalty in minute 53 when Petsos fouled him first and hit the ball with his hand afterwards. Enough reason to call for a penalty, but not for referee Meyer (who did not have his best day at all). One minute later and after a nice combination of Lewandowski and Großkreutz, Mario Götze was again in the focus of the 8.000 away fans and the other 41.000 supporters in the Fritz-Walter-Stadion. Götze appeared in front of Tobias Sippel but did not overcome the one-time German national keeper. For the next 30 minutes, there is hardly anything to write about. Borussia had big problems with the defense of Kaiserslautern and with the pitch itself – it was no real football pitch anymore. Many long balls from the midfield were cleared by Rodnei and impressive Martin Amedick and there were no opportunities – until minute 81. One of Sahin's great passes found Piszczek on the right side, his cross again found Götze, whose shot gets deflected, but usual anti-goalgetter "Manni" Bender took use of it and scored with a nice shot to the left side of the goal. Bender's first Bundesliga goal was a big relief and one had the 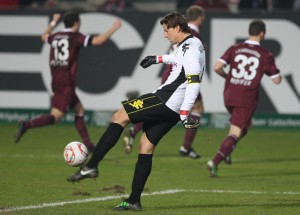 impression of what I wrote at the beginning of this text – everything will turn out fine in the end. However, it didn't. In minute 85, Subotic was send off the pitch after getting his second yellow card – a joke since Lakic fell into the way of Subotic after noticing that the Lautern forward would not get the ball. Moreover, the yellow card was a joke compared to other situations during the match where referee Meyer did not decide to show his love for cards, for example, Rodnei was not booked after playing some hara-kiri, Yoshimitsu, Kawashima or kamikatse against Zidan who could not play on after being on the pitch for entire seven minutes. Santana was brought in for Götze and BVB tried to go home with the victory. The rest is bitter truth for us: Tifferts corner kick is cleared off the penalty area by Barrios, but Moravek – who is on loan from blue-white by the way – gets the ball and scores with a shot he would have kicked out of the stadium in 99 of 100 attempts – no chance for Weidenfeller, 1-1, tie. F...! Now, you could argue that Moravek would not have gotten the ball if Borussia had played with 11 players in this situation, but remember what I was saying about if-sentences. In the end, it's not worth discussing about. Even though Subotic was send off for some lame reason, even though we did not get the penalty after the foul on Götze, probably, we did not deserve the victory this time. 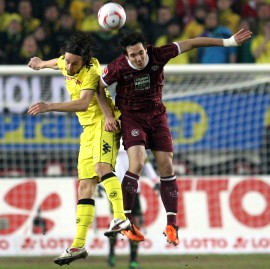 So we did not get the victory, the others like Bayern Munich (4-0 against Hoppenheim) and Bayer Neverkusen (3-0 in Frankfurt) did, but if you look at the ranking, you can still have your big smile on the face. 10 points ahead and the best goal difference of the Bundesliga. Like Mats Hummels said after the match and some stupid questions of a Sky reporter: "We don't care about it. We were 10 points ahead after the first half of the season, we are ten points ahead now. So why should we care?" Next Saturday is a must-win at home against St. Pauli one week before the big match in Munich. If we get the victory on Sunday, things keep looking good, so let's not panic and rely on the team – and on the new grass which will be laid in the stadium this week – only to be pulled out on May 14th by thousands of supporters storming the ground to celebrate what we deserve... 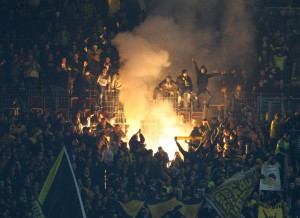