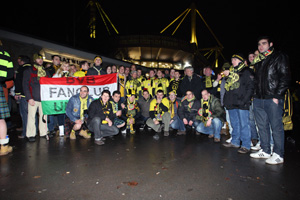 Before the derby schwatzgelb.com's Steph called our international followers and die hard Borussia supporters from abroad to meet before the match in the beergarden at Borussia's old ground the Rote Erde. This tradition-steeped environment provided the perfect location to smell the pre-derby atmosphere and meet up for a chat, some fan-beverages and the traditional stadium sausage.

Steph's call was heared all over Europe and even in Arabia someone fought hard but ultimately in vain to get the necessary visa on short notice. Regrettably not everyone could make it in time due to traffic problems, but our friends from Kent joined us for the after-match binge and the meeting with the supporters from Luxembourg is only postponed and will for sure take place soon at another BVB match. 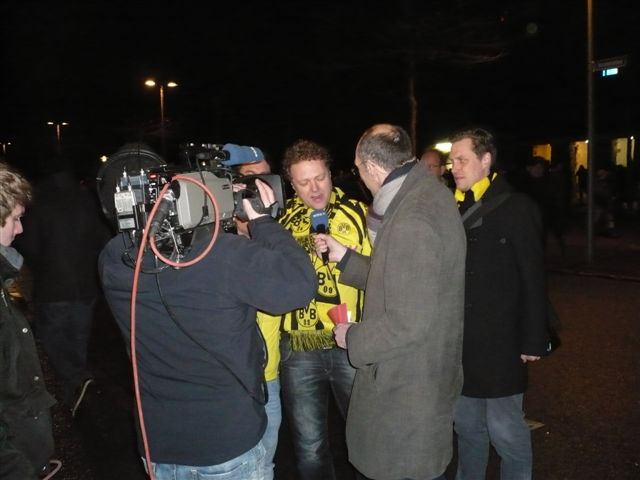 Nonetheless an impressive mob of international BVB supporters assembled in the Rote Erde. There were lots of Hungarians, who travelled all the way to Dortmund by bus for the derby, a large group from Norway who had to take the train from Amsterdam because their flight was cancelled. It is always impressive to hear what people are willing to take on to see the mighty Borussia play in the Westfalen temple. Also we had a group of Poles, some Belgians and the always easy to recognize kilted Scotsmen.

Finally the whole mob took formation in front of the Westfalenstadion to take the pictures you find below. A loud roar of "Scheisseee Null Vier!" in many different accents could be heared and all the blue scum walking past had to realize just how unpopular they are all over the world. 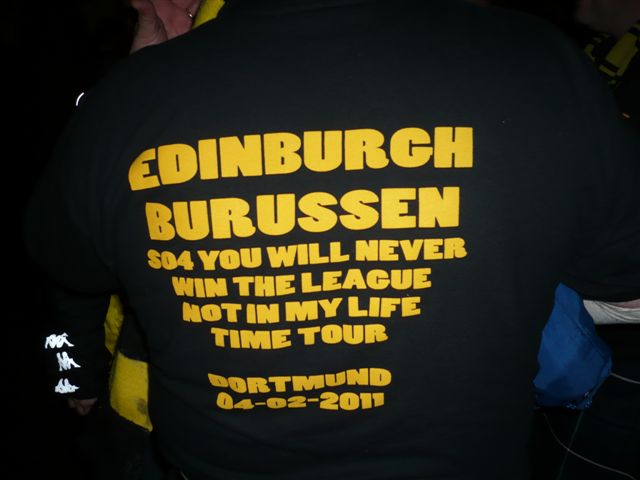 After the match some of us met again in the Wenker's Keller at Dortmund city centre and even if there was no derby win to be celebrated it absolutely became a night to remember, at least for those of us still able to remember any of it the next morning.

It was fantastic to meet so many BVB supporters from abroad and for sure this won't be the last time that we will lift our glasses together. Some of our international guests will tell you about their personal derby experience on schwatzgelb.com soon, so stay tuned!