I am running out of superlatives 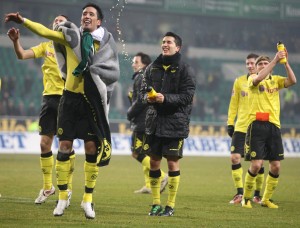 After the unfortunate draw against Stuttgart the other week, it was time to take home three points from, as my fellow editor Maurice called it, Factory City Wolfsburg. Did we succeed? Sure, we did. Easily one can almost say. It is kind of getting scary how in ease our players seem to be with themselves, how laid-back they play football, how euphoric they present themselves. Something we all won't ever get enough of I guess. But back to the game. We were guest in Factory City Wolfsburg and after the shocking news about Kagawa's injury during the week, it was time to get back on the pitch and play some football. On this way, again, all the best for Kagawa, get well soon, we are definitely looking forward to seeing you back in black and yellow again. Jürgen Klopp changed the formation on two positions by letting Barrios play right from the start while Lewandowski took a seat on the bench. Our Bender was back and healthy again and took over the place next to Nuri Sahin. 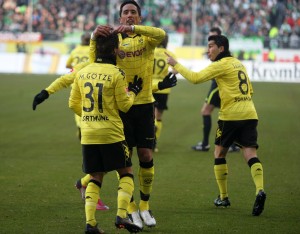 With around 10.000 Dortmund fans present in the stadium, we witnessed a start as you can only see it in a picture book. Wolfsburg got their first free kick after only a minute. Diego, however, only hit the net from the outside. Somehow, this free kick is important, at least now we know that Wolfsburg was indeed present on the pitch. It wouldn't look like it for the next 90 minutes. After only two minutes, Sahin, Götze and Barrios showed why it is getting more and more difficult to deny the season championship. Nuri Sahin's eyes seem to be everywhere and so he played a perfect pass after seeing our youngster Mario Götze on the right side. Götze, too, proved why people are starting to lack superlatives when it comes to our team. Since none of Wolfsburgs players intended to take care of him, Barrios had found a great position in the middle of the penalty area, to where Götze played a perfect cross. Barrios carried it into execution. Easily. 1:0 for us. His 09. goal. After only ten minutes Wolfsburgs Josue had to save his team from a header by Barrios, which he wiped away from the goal line. Already after the fist minutes it was easy to see that Dortmund was dominant in every matter. They were passionate, they fought hard, they had fun, they wanted to play football as surely as they CAN play football. They were the Borussia we get to fall for over and over again this season. It was simply fun to watch. With a permanent impulse to get close to the goal, our offensive players had the drive and the talent to use the free room that was often given by Wolfsburgs players in order to create danger in front of Wolfsburgs goal. Götze (24th), Barrios (25th). Our opponent seemed to find little means to come between our players and the ball. After around 26 minutes, it was former Werder Bremen player Diego (who shouldn't have too many good memories when it comes to our BVB) who shot a dangerous ball towards our goal. But as so often we could lean on Weidenfeller in this scene who fisted the ball to the side. Even Grafite's second try only resulted in the ball finding its end at Weidenfeller again. Let's jump to the 40th minute of the game where the same three players from the first goal were in focus again. Mario Götze had a lot of free room on the right side and played a cross into the penalty area, Barrios shot did not really find its way into the goal, but in front of Sahin's feet. Our Sahin then, hit the ball, first under the crossbar, then into the goal. 2:0 for us. Perfect. After these wonderful first 45, minutes it was time for a short rest.

After the great first half, we expected something similar in the second half of the game but Wolfsburg had still not found an answer to Dortmunds enjoyable performance. Instead, they started to cause some fouls which resulted in Weidenfeller being knocked down, Hummels being taken out of the game after he got hit into the stomach, and Bender having a laceration on his forehead. If one cannot play football, he has to help himself in other ways I guess. Fortunately nothing worse happened. And our Borussia? Unimpressed as usually. They found the perfect answer after a corner kick, when Mats Hummels pushed the ball over the goal line in the 71st minute. 3:0 for us. The only annoying thing on this perfect afternoon? Neven Subotic got his fifth yellow card and is therefore not allowed to contribute to the Derby Victory next week. But I am very sure that Santana will do a great job as well.

It was a good football afternoon. Even though Bayer Leverkusen and Bayern Munich had won as well, do we really care? No, we don't. We have complete faith in our Borussia. Who needs the help of other teams when you can do it on your own? As I have mentioned earlier, it is difficult to not repeat yourself and I am not a fan of picking our certain players, since we work as a team and we function as a team. But the way Bender got back on the pitch after his injury is nothing but impressive. He makes a difference and we can all be proud and happy to have someone like him in our team. But then again, there's a Sahin, Hummels, Götze, Piszczek and the list goes on and on and on. We sure are a perfect team. Thank you Borussia for this wonderful football afternoon, there's only one more little thing... Derby next week? GO FOR IT!!!