Kloppo?s Kindergarten Pt.3 - How did the young guns do? 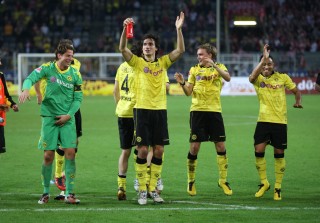 A year ago we presented you a review of the young-guns under 23 at Borussia Dortmund (you can find part 1 here and part 2 here). It was obvious that the BVB squad contained a lot of fresh talent but nobody would have expected them to take Borussia all the way to the top of the league within 12 months. We still have to be patient and wait for springtime to find out if they are already able to present a trophy to the ravenous masses around Borsigplatz, but it has become clear by now that some of the aspiring youngsters have taken a remarkable development over the past year. So the winter-break is the perfect opportunity to check who matched or even surpassed our expectations and who could not live up to his potential. So today we return to Kloppo’s kindergarten to visit Borussia’s toddlers once more.

In part three of our kindergarten report we show you what has happened to the youngsters from the BVB back end, part four will feature the development of our offensive talents. 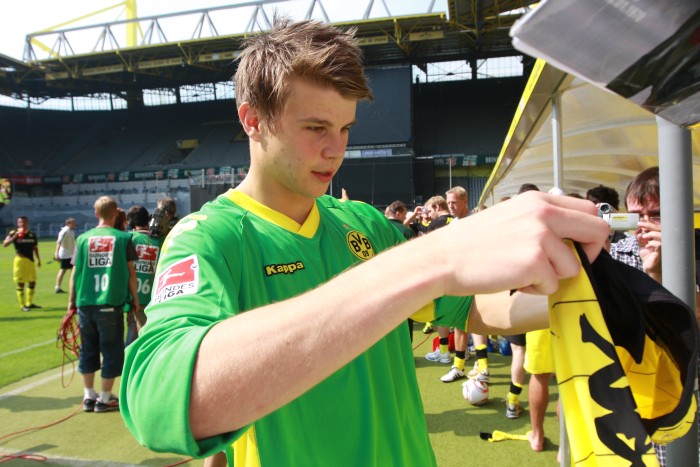 Between the BVB-goalposts veteran Roman Weidenfeller is still reigning and he is without a doubt playing one of his best seasons in Dortmund. Only 10 goals conceded in 17 matches is clear proof of that. Even though veteran substitute glovesman Marc Ziegler chose to return to Stuttgart in the summer, Marcel Höttecke decided to leave Dortmund. He saw no perspective at BVB and joined 2nd Bundesliga side Union Berlin. He started the season as substitute behind Jan Glinker but after 10 matches coach Uwe Neuhaus (still well known in Dortmund from his time as assistant to Michael Skibbe) gave him the chance to play. Regrettably Höttecke tore a muscle after starting in only four matches and he will have to try again to permanently claim the starting position after the winter break.

To replace Ziegler Borussia went looking on the other side of the globe and found 22 year young talent Mitch Langerak down under. Apart from some test matches the Aussie did not get the chance to prove that he has Bundesliga calibre. Weidenfeller’s contract runs out at the end of this season and he could not agree on terms for an extension so far, so Langerak’s chance to shine might come sooner than expected. But the BVB management surely knows of the importance of the experienced Weidenfeller for the young BVB defence and the prospect to play Champions League with Borussia must be tempting for Weidenfeller as well so a renewal of Roman’s contract seems likely. 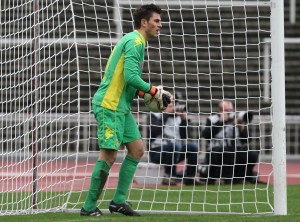 At the U23 reserve Johannes Focher took over for Höttecke once again. The 20 year old local boy from Hamm had replaced Höttecke already when he tore a cruciate ligament in season 08/09. Focher has had a mixed season so far in the 4th league team. He started off with some mistakes but stabilized himself just like his team as the season went on. If he is capable to take over a Bundesliga goal in the future can’t be foreseen by now. He still has a lot to learn.

Borussia still has the youngest defensive line in the league but this season it has also become the best in Bundesliga. Young-guns like Hummels, Subotic and Schmelzer made the next step in their career and ensured together with veteran Roman Weidenfeller that Borussia conceded the least goals in the league and kept a clean sheet in 8 of the 17 matches. 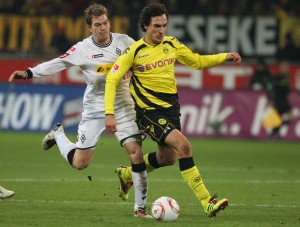 Last year we predicted that Mats Hummels’ first cap for Germany was only a matter of time. Even before the World Cup 2010 Jogi Löw proved us right. Though he did not pick Hummels for his squad for South Africa, which was widely criticized in the German media, he gave him the chance to play for the Mannschaft in the last test match before the tournament. Mats has shown that his development continues and was picked again for the test match against Sweden. Since the established centre-backs in Löw’s team like Mertesacker and Westermann are struggling at the moment our prediction for Hummel’s 2011 is that he will be a regular starter at the Mannschaft by the end of the year. He is already the head of Borussia’s back end.

Neven Subotic was a bit outshone by Hummels this season, but his starting position is absolutely undisputed. He just continued like he started in Dortmund: He seems absolutely indestructible (has not missed any match due to an injury), he’s a tough nut to crack for every striker, but his build up play leaves something to be desired. Too often he opts for the wide pass forward and too often the ball lands directly with an opposing defender. Also as always there are rumours about interest in Neven from EPL clubs, but it is unknown if there is any serious background to them or if they are made up by his British agent. 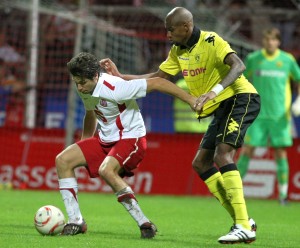 The outstanding performances of Hummels and Subotic leave little room for Felipe “Tele” Santana to shine. While he got to play some matches as starter last season (mostly due to Hummels’ injuries) he has only played a total of 35 minutes in 3 matches so far this season. He proved that he is a solid centre back with Bundesliga format already, but Hummels and Subotic are clearly on a higher level than him. But he never takes the frustration about playing so little to the public and generally seems to have a light mood despite sitting on the bench. That makes him a good team player and a vital part of the BVB squad.

Marcel Schmelzer just keeps on growing. A year ago he had conquered the place of BVB-legend Dede in the starting line-up and not only did he never let go of it even though the Brazilian has been fit for months, he even made it onto Jogi Löw’s shortlist. In November Schmelzer made his debut at the Mannschaft and if he keeps on growing at the same pace he’ll have another place in a starting line-up conquered soon. His development is really incredible. Mind that he was widely unknown in Dortmund before Jürgen Klopp joined Borussia and he played regularly for the reserve back then. And that is only 2.5 years ago. Considering that there are not too many German specialists for left fullback since Philipp Lahm moved to the right side there could be many more caps for Schmelzer in store. 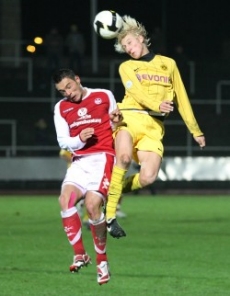 Last year we told you about aspiring right fullback Julian Koch, who was playing for the BVB reserve. At the start of this season Koch joined 2nd Bundesliga side MSV Duisburg on loan. He is not only a regular starter there (mostly playing defensive midfield) but got picked as substitute skipper by his new coach Milan Sasic and the kicker sport-magazine rates him among the top players of the league. So the Dortmund born talent has quite an impressive season so far and his designated return to BVB next summer is for sure one of the reasons that Patrick Owomoyela’s contract renewal is in jeopardy. Julian Koch also plays for the German U20 and U21 teams.

There he can meet up with his old team-mates Lasse Sobiech and Marc Hornschuh who both play as regular starters for the BVB reserve in the 4th league. Sobiech suffered a setback in his summer holidays when he was chilling at a canal side and got hit by a docking ship. He squashed a muscle in his leg and earned a top ten spot on my personal list of most ridiculous footballer injuries. Both Sobiech and Hornschuh will have to prove in 2011 that they can be assets to the BVB pro squad. Maybe they should follow the footsteps of Julian Koch and join a club of the 2nd Bundesliga on loan next season, because most of the starting positions in the BVB defence are covered by players only a couple of years older than them but already with the status of established Bundesliga players and even internationals for their country. So it will be tough to get into the BVB roster for the upcoming defensive talents. On the other hand the development of Marcel Schmelzer shows that there is a chance to make it at BVB for the homegrown young-guns.

That’s it for the moment, next time we check back on our offensive youngsters.