Football Factory at Legends, New York-The heart of football in the heart of the city 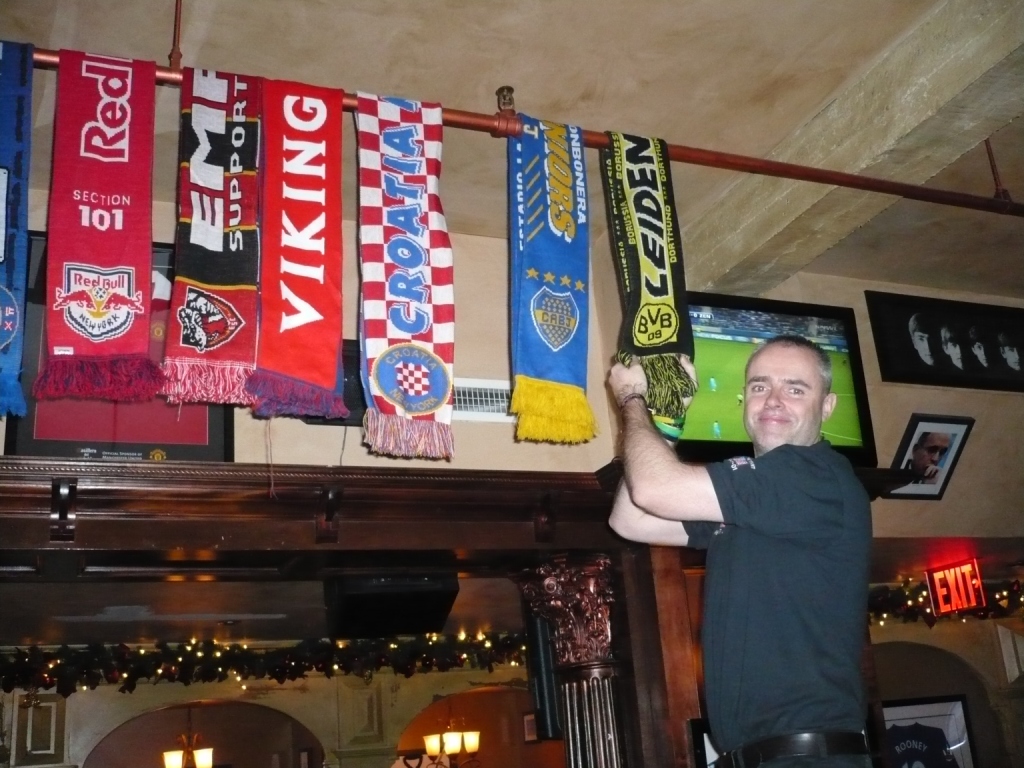 Maybe, some of you remember my report about New York having been published on schwatzgelb.com one year ago, regarding the football bar Nevada Smith’s.
A visit of this football bar last year was really worthwhile, because we (my wife Cornelia, my brother-in-law Wolfgang and me) had the opportunity to watch the 2:0 win of BVB against Nuremberg live. Furthermore we met a Japanese girl, named Chikako, a BVB supporter as well as a great Shinji Kagawa Fan.
This year again we booked a trip to New York and so we all felt very sad when Chikako mailed, that Nevada Smith’s closed for renovation. This was absolutely horrible, because it was a fixed point of our New York trip to watch the matches of BVB, against Mönchengladbach, as well as against Marseille in the Champions league, live on TV. Of course there would be the possibility to receive SMS from home, but everybody knows that this would not be the perfect solution. So, what to do? I searched via Internet for alternative Sports bars, but honestly not very successful, because in most cases only Baseball and American Football were offered. Luckily, I received another mail from Chikako, including the address of a new Manhattan sports bar, opened in 2008. After our two visits of this sportsbar it is not an exaggeration to state that this pub is a real paradise for any Borussia- or football fan. And here it is:

When reading “Director of Football” according to his calling card, it was no one else but Jack Keane, responsible for broadcasting football (don’t call it “soccer”!) as he previously did in the bar Nevada Smith’s, mentioned above.
Jack Keane, born in Ireland immigrated 20 years ago to the city that never sleeps. Being a Manchester United supporter, he recognized the gap of football on American TV and expanded his offer by showing matches of different leagues more and more over the years. 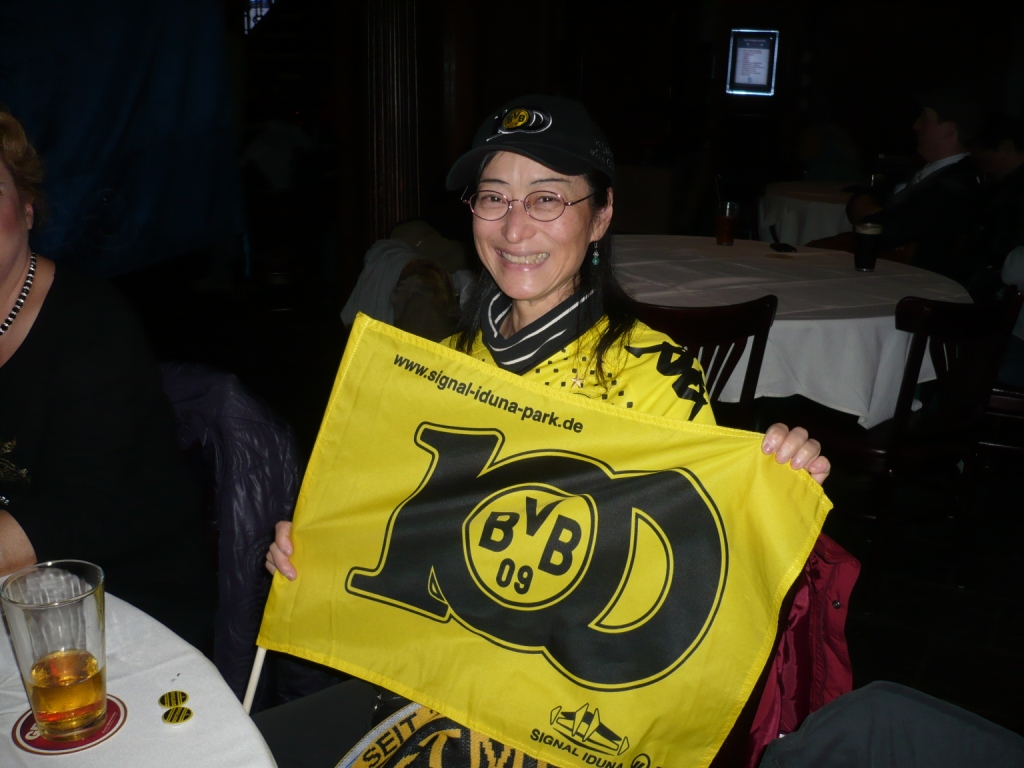 A very good decision and therefore Jack Keane deserves the title “New York Marketing Award” for all times – if such an award will exist. His offer even improved when moving to the new place! While Nevada Smith’s was a little aside from the heart of Manhattan, located in 3rd Avenue, now you will find the spacious and very nicely set up Football Factory not far away from the famous 5th Avenue, just opposite to the Empire State Building. For us it was only 2 blocks or 5 minutes to walk from our hotel.
In order to be on the safe side, that this bar will surely be open when Borussia -Dortmund is playing, I contacted the Football Factory right before our departure via E-mail. Robert Kennerney, the manager of Legends answered that beside the Bundesliga conference and Bayern Munich vs. Werder Bremen also Borussia Dortmund vs. Borussia Mönchengladbach would be shown live. He pointed out that the pub will be open at 7.00 o’clock in the morning and there is also the opportunity to have breakfast then. Could there be better news for a BVB-Fan being in New York? Our decision was made: Jack, Robert and all from Football Factory, we will meet right on time on Saturday in order to watch the game. We surely would be able to have the first beer in the morning at 9.30h due to time shifting. Naturally it was no question that the boys of Football Factory, being friendly and full of service had to be rewarded correspondingly. Therefore a BVB-pennant was packed up into the suitcase. Chikako, who informed us that she could only watch Borussia Dortmund – Marseille due to professional reasons, would get a Dortmund scarf. In addition to that, two flashing buttons, illuminating the writing “Dortmund” by LED lights were bought on the Dortmund Christmas market for her. Surely not an authorized souvenir, but in black and yellow – the absolute trendy colours hopefully for the next 100 years!

So, thanks to the Football Factory, we could watch the game of the big Borussia against the little Borussia live. It was an absolutely great feeling when we went down the stairs to the basement and had a look at several TV screens, surrounded by a lot of English spectators who watched the match Newcastle vs. Chelsea. They gave us a warm welcome by saying a lot of friendly words and we got a lot of packs on the back. The man behind the bar was Jack Keane. 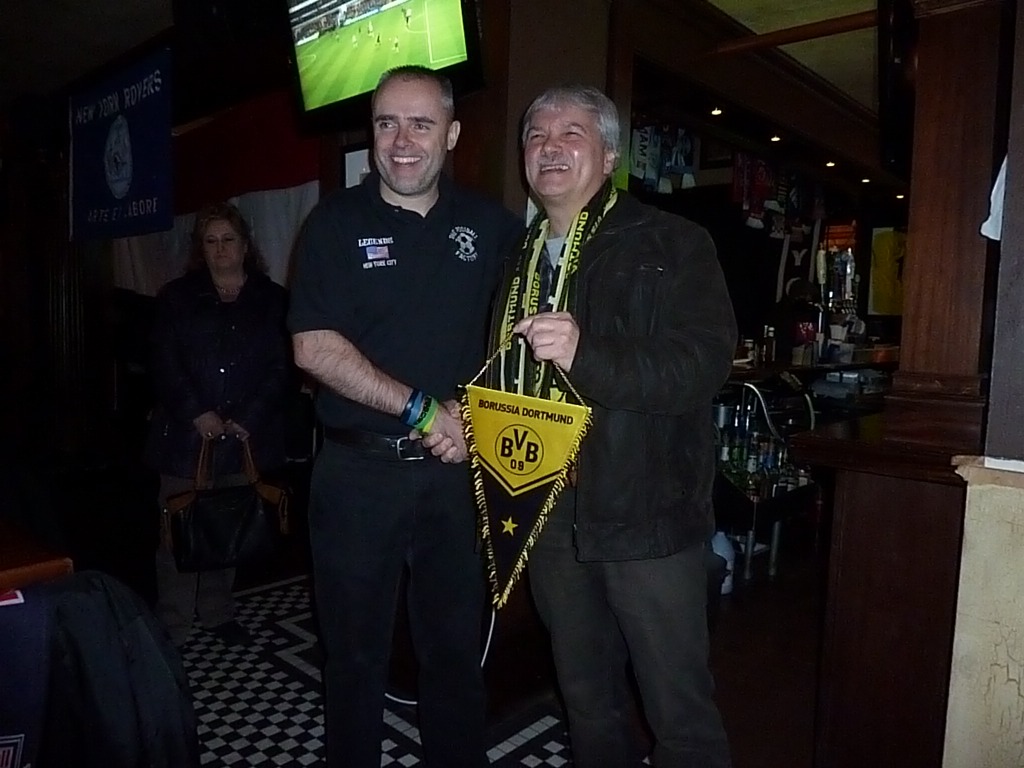 Jack came immediately when he saw us and shook our hands, recognized the BVB-scarf and said ”Welcome Borussia Dortmund, I’ll always remember Lars Ricken, he shot out Manchester United in 1997!” Such a nice welcome needs no further comment. World-class! And that happened in the heart of New York, more than 6.000 kilometers from Dortmund.
As the great room was totally crowded with Englishmen, Jack had prepared separate tables for us Germans beside the bar. Together with some Bavarian Fans and one lonely Gladbach Fan, they had all found the way to the Football Factory. We enjoyed a delicious breakfast and looked excitedly at the screens.
Meanwhile there was slight delight when Bremen equalized in Munich as well as some exultation when Lewandowski scored. After that Bavarian delight about the goals of Ribery and Robben and last but not least a jumping Gladbach Fan, exultating the equalization of his team. Now, BVB wasn’t longer on top of the table, but everybody was happy on this morning in New York City.
When paying our bill (by the way, really fair prices for a bar in the heart of Manhattan) we thanked Jack as well as Robert, who sat down at our table for a short talk.
I handed over the BVB pennant to Jack under big applause from the English spectators and Jack fixed it nearby a pennant of Blackburn Rovers. When we left I discovered a scarf from a blue-white suburban club not far away from Dortmund, hanging from the ceiling. Insiders will know its name, beginning with Sch…! There was no doubt: soon – very soon – there must be something in black and yellow as a contrast!!! But no hurry, there was still the match against Marseille.

Maybe, it might have been a symbol that the sign “EXIT” was situated just over the TV screen when BVB was fighting for surviving in the Champions League. Now it is not necessary to discuss the result Dortmund – Marseille once again. 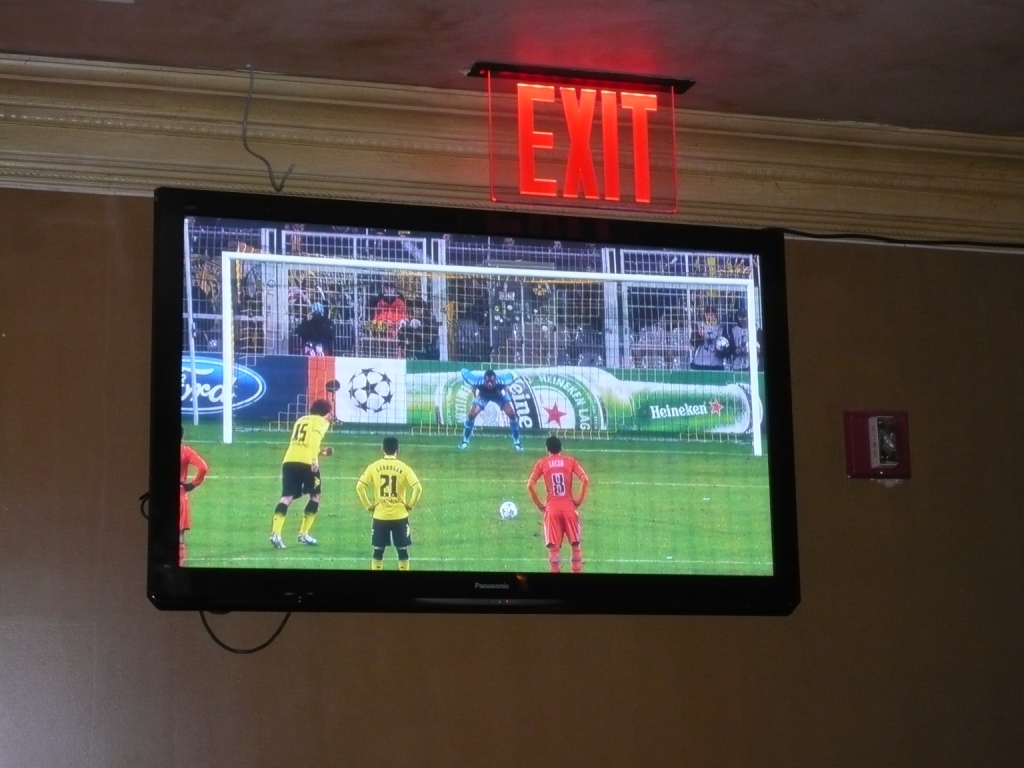 This already has been done by real or self made “experts”. The evening was – despite the result – again a real good experience. Our Japanese friend, Chikako, showed up in a Borussia Dortmund shirt, she bought in Tokyo. At the end of the match she found the right words:” Next time Borussia will be much better in the Champions League!” Absolutely right!
Actually we are # 2 in the Bundesliga and have all chances for a successful end of the season. So all you fault-finders or know-it alls, please be quiet! “Sorry, but that’s football”! Jack and Robert added. Yes guys, also absolutely right! So we drank a last delicious Guinness before we left the pub. But STOP! There was one more important thing to do! I handed over my black and yellow Dortmund scarf to Jack and he fixed it at a balk near the bar, enough arms-length away from the blue white scarf of a club waiting for the German Championship for more than 50 years. So let’s all raise our glasses for the next 50 years!

What remains in our minds now, two weeks after returning from New York? It is reminiscing about a real good sportsbar with new friends and a lot of hospitality. Thank you Jack, Robert and all at the football factory! And if you have any plans for a trip to New York in the next time, the visit of the Football Factory at LEGENDS is a real must! I think there will be also reason enough for us to visit this pub next year again: Will be the Dortmund pennant and scarf still fixed at the bar? I think “Yes, both will be!”