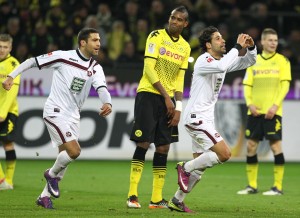 Borussia Dortmund failed in their attempt to come back in style from the horrible Champions League exit and wasn't able to beat 1. FC Kaiserslautern at home. Being the better side was not enough at all. After an early lead by Shinji Kagawa the Kaiserslautern boys utilized on one of their few chances and got away with one point from Westfalenstadion.

BVB had a really bad week. On Tuesday they gave away a 2-0 lead at home against Olympique Marseille resulting in a 2-3 and in addition lost holding midfielder Sebastian Kehl due to an eye injury. So as Sven Bender and Moritz Leitner were also still injured, we had a problem on the holding midfield position. As Mario Götze was available but not 100% fit, coach Jürgen Klopp opted for veteran da Silva and youngster Ilkay Gündogan. Großkreutz on the left and Polish speedster Kuba on the right wing were accompanied by Kagawa in the centre and Robert Lewandowski up front. Last season's top striker Lucas Barrios got a flu and missed the match.

Kaiserslautern coach Marco Kurz made only one change compared to last week's 1-1 draw against Hertha BSC Berlin. Martin Amedick was left on the bench and Rodnei was given the chance to sho what he can do. Looking at the plain tactics Kaiserslautern played more or less the same strategy as Borussia Dortmund with a flat-four, 2 holding midfielders, a three-men offensive midfield and a sole striker. Nonetheless the Palatines played this strategy with much more caution and deep in their own half. 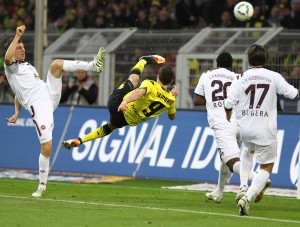 A capacity crowd and the chance to top the table for at least 2 hours gave perfect surroundings for this match. And the action started with both teams immediately up to it. Kaiserslautern had a first approach with a shot from 20 metres, which was wide. The Palatines played an aggressive pressing, so that Borussia Dortmund didn't get into their style of gameplay. Though the Westphalians had more ball possesion, they struggeled to create early chances. On the other side Florian Dick hammered a freekick from 25 metres direction Roman Weidenfeller. The BVB goalie needed all his talents to clear this one. It took until minute 14 for Borussia to set a first black-yellow highlight. Following a freekick taken by da Silva the ball bounced a couple of times through Kaiserlautern's box. Finally Robert Lewandowski tried his luck with a bicycle kick from about 8 metres distance, that hit the bar! That was the kickstart for Dortmund to raise the pressure. Only 60 seconds later Kagawa penetrated the box just to get laid by Abel. Referee Aytekin wasn't convinced and didn't gave a penalty, at all that decision was ok. 19 minutes into the first half da Silva had another freekick opportunity that only hit the wall. 8 minutes later Gündogan initiated a fine attack when he found Großkreutz waiting at the edge of the box. The Dortmund-born player made a brilliant first touch, that saw Kagawa unmarked 17 metres in front of the goal. His immediate powerful shot left Kaiserlautern goalie Trapp no chance and hit the lower left corner – 1-0 Borussia Dortmund! Considerung the last 10 minutes surely a deserved lead! And the Japan national aim for a second one only minutes later, but his shot was wide. Kaiserslautern didn't make any attempt to raise the pressure or start furious attacks, they still played well organized. So Borussia had only one last chance in the first half, when after a corner kick Hummels fired a header, that was cleared on the goalline by Sahan.

Borussia longed for the second goal immediatelly, when Kuba appeared in front of Kevin Trapp but was denied by the Kaiserslautern goalie. Guest coach Marco Kurz realized, that the match was not the way, how he expected it should be after the halftime break. So he did an early substitution and threw in Shechter for Kirch. Though Borussia Dortmund had still more ball possesion and Kaiserslautern was lacking really dangerous situations, the black-yellow boys struggled to create dangerous situations. And so in minute 60 a wide pass by Tiffert headed for BVB's box. Right-back Piszczek made a lousy attempt to clear by head. The deflected ball found Sahan 17 metres left position and the Kaiserlautern forward fired a superb diagona shot into the right corner of Roman Weidenfeller's goal – 1-1! By now somehow a suprising draw as BVB controlled the match. Nonetheless the home team forgot to hit a second one to decide the match. Now it was Jürgen Klopp's turn to turn the tides with a substitution. Mario Götze entered the pitch in favour of Kuba. In minute 72 it was again Hummels, who nearly scored by head. Unfortunately the ball it the post only. Within the same minute a deflected ball was volleyed by Großkreutz from 20 metres. Somehow the ball found Robert Lewandowski 13 metres in front of the goal – totally unmarked! More or less surprised by this opportunity his shot was an easy save for Kevin Trapp. But there were also some efforts by Kaiserlautern. In minute 77 Shechter tried to score by head and took Roman Weidenfeller a brilliant save to avoid a second Kaiserslautern goal. Minute 80 and 82 saw a another two chances by BVB. First Lewandowski's header found the post and then Mario Götze fired a 25 metres shot, that hit the bar. Borussia started some more attacks, but was able to create any other chances and so the match ended with a 1-1 draw. 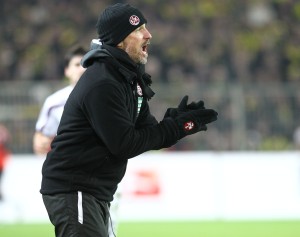 At all an unnecessary draw. Kaiserlautern performed well considering their situation and earned their goal. Borussia was the better side and created more chances. Still the black-yellow team lacked the ability to finalize the match with a second goal. Nonetheless we have to concentrate on our next match away in Freiburg and the difficult task in the third round of this season's DFB cup in Düsseldorf. If we win both matches, we would have played a fine first leg this season.