Hibernation in the Cup- that would be nice! 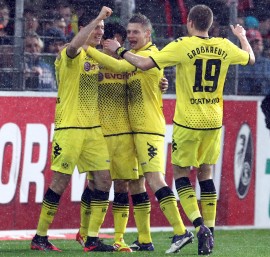 And of course our Dortmunder Jungs will do everything to make this wish come true. It's gonna be a difficult task for sure, after all it has been a long year with little downs and many, many ups. But there comes a time when everyone needs a rest and after this amazing first half of the Bundesliga season, and a difficult time in the Championsleague, our boys have the chance to qualify for the next round in the German Cup and then have their well deserved break. The task? Miss Fortuna from Düsseldorf- a short trip into the capital of our state NRW. After we had beaten Dresden at home, and hence stayed in the Cup a little while longer than we usually do, our next task isn't any less attractive for us fans from Dortmund. 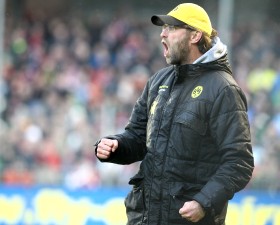 The Fortuna from Düsseldorf has survived a few rough years in the past decade. After some dreadful years in the fourth devision, they climbed up to the third one and stayed there for a while. But with a lot of patience Düsseldorf managed to create a team that went up to the second Bundesliga again in the year 2009. The ascent to the first Bundesliga was missed by a few points back then, but this year, it seems closer than ever. This season, Düsseldorf pretty much experienced what we did last season. A victory, after a victory, after another victory, little draws in between and a defeat? Nowhere in sight. It was this weekend that Düsseldorf lost, for the first time this season, against another surprise from the second Bundesliga which has plans to climb up to the first Bundesliga as well- Paderborn. Regarding all these facts, it can probably be said that there are rather easier tasks to survive, and we all know the saying that the Cup has its own principles, but still, Düsseldorf is a team we can all look forward to to play against. They are strong and eager, but so are we. We should face an interesting match. 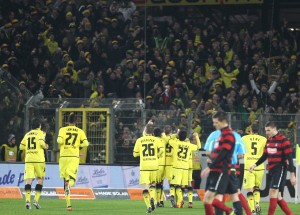 While Fortuna faced their first defeat of the season last weekend, we finished the first half with a victory in Freiburg and amazing 34 points in total. But as I have mentioned before, it has been a tough year. So many wonderful moments accompanied us throughout the past twelve months but all these wonderful moments were achieved with a lot of hard work. And this hard work takes a toll on everyone at some time. Before this season all of us have been discussing our wonderful defense that has an extra bonus with Santana on the bench, and let alone our lower defense around Kehl, Gündogan, Bender and Leitner. Problems of luxury whereever we looked. By the time the Cup calls for a game against Fortuna, we have to check twice which players are still there to count on. We were lucky last season, the football witch and injury God had somehow forgotten us on the way and so we survived the season with more or less little injuries. This season- it seems different. You would think that someone needs to catch up on what he had missed last season. After Barrios, Zidan, Bender, Subotic, Leitner, Götze (and partly Kehl) in the past weeks, Schmelzer and Santana will miss the game against Düsseldorf as well. So our ever growing defense has suddenly thinned out big time and our coach Jürgen Klopp needs to experiment a little bit. But as someone had pointed out in the discussionboard earlier, look at our team. So many injured players and yet, we manage to bring quite a strong team out there on the pitch. Our boys will be fine, I am sure.

Dear Ballspielverein, it is your 102 birthday today and words can hardly express the world you mean to me and thousands of other people. We will be there in Düsseldorf and support you for 90, 120 or how minutes it takes to bring this thing home. Come on young guns, let's show Düsseldorf that they may rule the second Division of the Bundesliga, but that they can never rule the greatest team of the world: Borussia Dortmund.

Where?: Esprit- Arena (sold out)