This could be the beginning of a wonderful journey to Munich 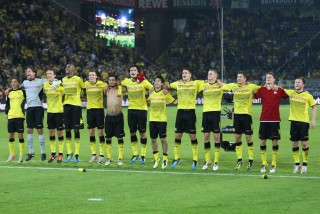 ....or in other words: hello we are back again. We all know you missed us. Truthfully, after Saturdays performance the word Championsleague sounds kind of wrong at the moment since our performance was not the one we wish to see of our Borussia. But looking back to the last season: this is the reward for all the achievments and all the effort the team has put into the game a few months ago. They deserve every second of one of the biggest dreams every football player has. And now we are here...almost 09 years after our last game on the big stage, we are back again.

Among Europes finest like Barcelona or Manchester United, you will find the name of that one team all of us have lost their hearts to. And rightly so. A comment on our website today made my heart beat a bit faster again. The boys and I had thought that it would be wonderful thing to meet up with every Arsenal fan that would like to join for a fan meeting before the game. Have a tour through the city, drink a few beers and celebrate everything that great football is about. The reply of an Arsenal fan was the following:" Not many clubs do this. This is the reason why Dortmund will always be a classy team." Words that we all have to keep in mind during the easy days but more important during the difficult ones. It is wonderful that we got such a great reception on our request for the fanmeeting and we are very happy to welcome you guys in beautiful Dortmund.

But more over, we are incredibly happy to be back, Championsleague football during the week, floodlight in our wonderful Westfalenstadion...all that and more words can't express. It is quite an emotional thing of course. We have been through some bad years and last season's win of the "Bundesliga" seemed to have been the cream of the crop. And now we are ready to take it a step further. Looking at our team, it feels like nothing much has changed. Obviously Nuri Sahin, who had a big share in our success last season, is not here to play with anymore, but other than that, our team has stuck together. And still, it seems like they haven't quite arrived in the Bundesliga, yet. After a brilliant start against Hamburg, it went downhill against Hoffenheim. From there on it went up and down and some of us are wondering where all this insecurity is coming from, since we know that our boys can do better...and yet it is pointless to take the whole team apart this early. We all know that we had some problems during the last games, that our offensive game was not quite like we have been used to it from last season, but I hope, and I have great faith, that our boys know how special tomorrow's game is. And I have faith that they will be motivated until the last second of the game has been played. And whatever the outcome may be, it will be alright.

It could have been a special game for many reasons since we thought there would also be some kind of reunion involved in the game. The last time we qualified for the Championsleague there was still a player in our team that know wears the colours of the team we will be playing against. I would have loved to welcome Tomas Rosicky back to the greatest stadium of the world, we had some great moments together and at one time we were celebrating along with him like we are celebrating with our heroes today. But unfortunately he won't be able to join his team on the pitch due to a leg injury. 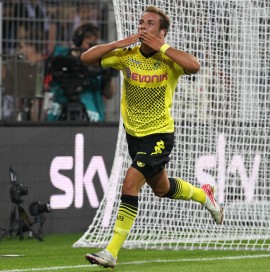 Which leads us to tomorrow's guests. Our season start was a bit bumpy but still, probably nothing compared to what Arsenal had to go through during the first few games of the English Premier League. After the disastrous defeat against Manchester United, people actually started to wonder whether Arsenal will actually be able to compensate the loss of Cesc Fabregas who decided to leave Arsenal for Barcelona. So far it didn't really look like it. And another downer followed for Arsenal after it was announced that Aaron Ramsey won't be playing as well. Dortmund on the other side is grateful to welcome Mario Götze back into the team. After the rumours went around that Arsenal had made an offer of over 40 million Euros, we all hope that our Götze will prove to them that he would have actually been worth every single penny of it. Which leads us to the question how our offense will operate tomorrow evening. Götze will be back in, that's for sure. The question rather is what to do with the rather weak Großkreutz and Kagawa. Perisic would be a good alternative for Großkreutz on the left wing site. For sure, we will find out tomorrow evening.

Ladies and Gentleman, I could continue talking about the problems of both teams, the benefits of them, but why don't we just think of how wonderful tomorrow will be anyway. Simply because we are back, simply because we are able to greet the other teams from Europe in our Westfalenstadion again. Simply because our Borussia from Dortmund will surely give it all. Dear Arsenal supporters, we are looking forward to seeing you before the game, let's be happy and celebrate a wonderful night of football, with the points, however, staying in Dortmund.