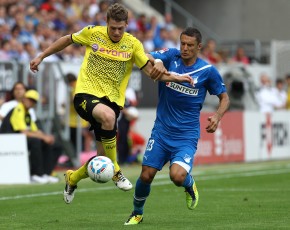 Things looked so easy last week with an comfortable 3-1 win against Hamburger SV, but this weekend was surely a little setback for Borussia's supporters. Losing 1-0 in Hoffenheim sounds bad, but after all the team performance was still ok. An early freekick lead took the drive of Dortmund's game and Hoffenheim opted for defence tactics.

Jürgen Klopp was in the same position like last week. Subotic and Barrios were still injured and leftback Marcel Schmelzer on the bench as he had joined the team training only this week. So Santana in central defence, new signing Chris Löwe as leftback and Robert Lewandowski up front started.

On the other side coach Stanislawski had to cope with a really bad start into the season. With a zero-pointer in Hanover he needed results to keep the crowd and big boss Dietmar Hopp satisfied. Compared to the 2-1 loss Mlapa was left on the bench and Firmino started.

TSG Hoffenheim started with fine pressing, trying to stop Borussia Dortmund's high-speed football very early. A first result of this tactic was a yellow card for Sejad Salihovic after a foul conducted on Kagawa. Only 60 seconds later the first highlight. Dutch national striker Ryan Babel set up for Robert Firmino and the agil Brazilian midfielder fired a sharp shot from about 18 metres. Leaving BVB goalie Weidenfeller no chance to save, the ball hit the lower side of the bar and jumped out of the goal – close one! And Hoffenheim was on the driving seat now. In minute 9 they got a freekick 30 (!) metres half right position. Specialist Salihovic stepped up and fired a phenomenal highspeed curved ball into the goalie's corner – 1-0 Hoffenheim! Though the ball hit the net on Weidenfeller's side of the goal, it wasn't really a mistake by him as the ball changed direction during his flight. With this lead Hoffenheim changed their tactics a little bit and stood deep in their own half. Borussia really had problems to get into their style of play and find a hole in Hoffenheim's defence. 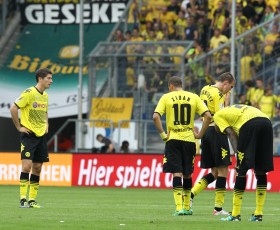 Their first really dangerous approach took until minute 30 (!) when Großkreutz tried a long distance shot from about 25 minutes. In the end no problem for TSG goalie Tom Starke. 1 minute later hot prospect Mario Götze tanked down the left side and entered the box. His smart low cut-in found again Großkreutz in the middle of the box. His powerful shot took the best out of Starke, but was cleared in the end. Borussia Dortmund had now control of the midfield and superior ball possesion. In minute 42 Kagawa paced into Hoffenheim's box and was brought down by TSG defender Vorsah. The referee saw no need to call a penalty, but in TV slow-motion it looked more like a foul by Vorsah. With this last arouser both teams headed for the halftime break.

Both coaches didn't see any need to substitute and so the same 22 men entered the pitch. Borussia took control again but was still lacking serious firepower. In minute 53 Firmino had another approach when his shot from narrow angle was cleared by Weidenfeller. Jürgen Klopp used two of his three substiution options in minute 54 and 56. Kuba replaced Mario Götze on the right wing and new Croation signing Ivan Perisic was brought in for Ilkay Gündogan. And Ivan Perisic had his first chance only minutes later when a high cut-in by Kuba found his head, unfortunately the ball was wide. In minute 63 Perisic tried another header. This time the ball hit the left triangle. By now Borussia Dortmund was really dominating the match and it was only a question of time for the equalizer. Still Hoffenheim was dangerous by counter-attacks. In minute 75 the referee stopped a Hoffenheim attack because of an offside position – and he was dead wrong. That could have been the decision, so Borussia was lucky in this situation. During the last 10 minutes BVB somehow lost touch. Their attacks were more or less easy to defend. A last drive by substitute Zidan found Kuba on the righ side, but the Polish national wasted this one too easily, so that the match ended 1-0 for TSG Hoffenheim.

As a sidekick there was an interesting observation on the stands. Like in the last years Borussia Dortmund's supporters made some chants against Hoffenheim boss Dietmar Hopp, the founder of software giant SAP and big spender in Hoffenheim. In their attempt to muzzle the guest supporters, not only from Dortmund, the Hoffenheim stadium is now equipped with an high-range sound, that is used everytime there is a chant against Hopp. As the sound is really high and loud it is even somehow painful. Not really a hospitable guesture! 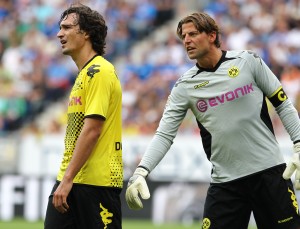 Regarding the 90 minutes, an unnecessary zero-pointer. Overall Borussia Dortmund had more ball possesion and more chances to score. Nonetheless there were only few really dangerous moments. Hoffenheim made the best of their early lead and played a smart defence with a counter-attack every now and then. In the end we should accept the result as at least the hype around BVB and Mario Götze might fade away.