Just about three quarters of a year ago, the organisation "Kein Zwanni-Fußball muss bezahlbar sein" (No €20 – football has to be affordable) was founded in reaction to an unacceptable top match surplus at the derby in Gelsenkirchen. Within three nicely chaotic weeks full of hectic, hopes and regrettably also disappointments a protest was organized that for the first time in Bundesliga history went beyond banners in stadia and acoustic expressions of resentment: The organized boycott of a game. It was clear from the beginning that this would be no singular action. To stop the development of entry fees that is problematic for the fans and in a long term perspective for football itself it needs time and persistency. Time for a review.

In the first part we had a look back on the roots and the basic ideas. Now we will have a look on the here and now. The general aim, establishing the movement on a foundation that is overarching club boundaries has already been reached. We enjoy popularity from nearly every supporters of all clubs. Besides the initiators supporters of the HSV, 1. FC Köln and Bayern München were actively involved. A uncomplicated and useful collaboration – as we have already seen during the second leg matches in terms of banner actions or the collaborative demonstration in Hamburg last season. Everyone pull together and support each other. We are well on the way and at this juncture again greetings and a thank you towards the Hanseatic City of Hamburg, cathedral city Cologne and the Marienplatz Munich. Not forgetting the supporters from Mainz, who because of the ticket addition for top matches also boycotted the match 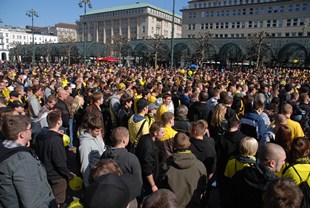 in Gelsenkirchen. Likewise under the slogan of „Kein-Zwanni“. Something is arising. At the same time one should not forget, that the movement still is in the early stages of delevopment. Until this collaboration will bear fruit it needs time and patience. It will be a policy of gradualism that could sometimes stagnate and maybe even experience small regresses. Concerning Dortmund there are currently two matches which were in the focus of „Kein Zwanni“. The second leg match in Hamburg which is traditional expensive and the upcoming first cup tie in Sandhausen. In both cases the supporters initiative contacted the clubs via mail and articulated its displeasure with the prices as well as demanded price reductions. Thoughts of boycotting these matches too were hold out. In the end this „last option“ was not implemented, because of the fact that the HSV signaled willingness to negotiate about the prices for next season and Sandhausen reduced the prices for the standing places from 18,00€ to 15,00€. As a matter of course different opinions of the results exist. For one side a partial success for others far too little. It depends on subjective opinions.

But it is fact, that the SV Sandhausen reduced the ticket prices for nearly one third of the supporters around 17% and that the HSV signaled readiness to talk for the upcoming pricing of its guest tickets. This shows, that one can even as a young supporters movement taken seriously and will be negoitate with a great club soon. Of course the result of the negotiations has to be definite and certainly the prices for the seats in Sandhausen are way to expensive, but a solid base has been build. Supporters are recognized as a relevant factor in the price policy and not only as consumers. At the beginning of the movement I thought that a longer period of time and more „militant actions“ would be necessary. 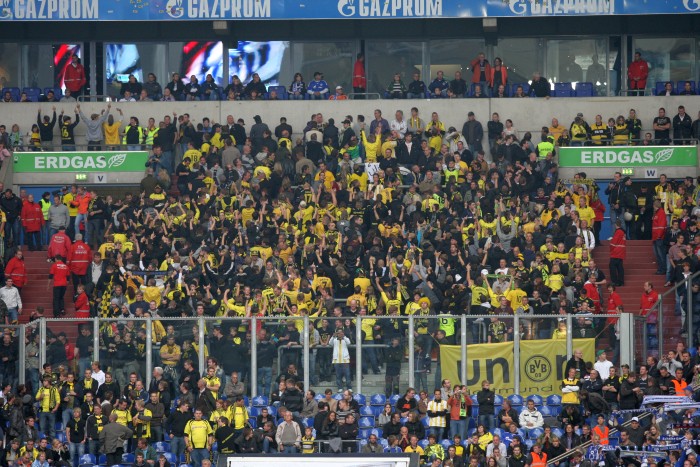 If we want to reach a long range achievement, a consensus between the valid financial interests of the clubs and the interests of the supporters must be found. A way, that is passable for both sides. Therefor supporters first of all need to be recognized as discussion partners and accepted. Regardings this point, a first little triumph has been reached. Certainly one should not make the fault to slap on the own shoulder complacent. The way is still long and tough. It is about a lot of money that the clubs will not spend fast and frivolous. It will be much harder to find a consensus with the organization of the seats. In this case the contingents are bigger and the prices higher. Furthermore are incisions in this field harder to bear for the clubs as in the standing places. Here lies the greatest discussion potential for the future. But „Kein-Zwanni“ does not intend to refuse on this topic and will take a stand for equal prices for seats and standings.

In terms of this consensus process one must rate the waiver of boycotting the matches in Hamburg and Sandhausen – even if its not satisfying for everyone. Trying to reach the aims with might and main is a wrong track. One can call out collective boycotts all the time if the maximum demands are not reached immediately, but one would leave behind losers on both sides. Clubs who feel blackmailed and react stubborn and supporters, who are not able to support their team within the stadium. To oft used, the boycott is a „weapon“ that soon becomes outworn and blunt. Because if the „troublemaker“ would stay outside with increasing regularity, their place will be taken by other people who are still ready to pay tickets for advancing prices. This is way boycotts should never be the first form of pressure but only the last sign for dissatisfaction. Until then one should try to find a common way and recognize the first concessions as first steps on the long track.