Important skipper, even when not on board 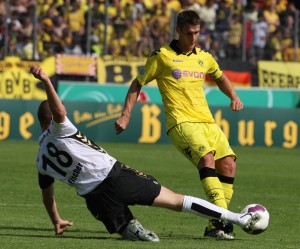 The team wins the title -- not specific players. And, although the performance of a team "but for" a player's contribution can never be determined, it is clear that some players contribute more than others to the ultimate achievement of a title. Every title team has its heroes, both exalted and unsung, its role players, its bit players who shine at critical moments, substitutes, alternates, squad players, and more. And, for the most part, their contributions are understood, and for Borussia, we know who is who, even as we understand that the whole is far greater than the sum of its parts.

But then there is a player like Sebastian Kehl. Kehl's 2010-11 championship campaign ended up much like his 2009-10 campaign . . . which was much like his 2007-08 campaign, and his 2006-07 campaign. I have not been a Borussia fan for very long, but I rapidly learned that my enjoyment of Kehl's 2008-09 performance was something of an anomaly . . . in that it existed in the first place. Sebastian Kehl has essentially been captain in absentia for 4 of the last 5 years, the last of which garnered a championship and an almost silent, de facto transfer of the captaincy of the club to Roman Weidenfeller. Because his place on the team is so important, but his time on the field so limited, it is next to impossible to know what contibution Kehl made to the 2010-11 championship. But looking only at the basic statistics -- 6 league games -- may cause one to lose sight of the larger picture.

An rarity on this squad of youngsters, Kehl has been with BVB for nearly a decade. He and Dede were the only remaining players from the 2001-02 title winning team. After winning his title with Borussia shortly after a transfer from Freiburg, Kehl was a mainstay as the financial foundations below him dissolved away. Shortly thereafter, however, the natural leader Kehl became Borussia's "Fisher King" -- felled by a leg injury in the first match of 2006-07 by villainous Bayerische defender Hasan Salihamidzic in a studs-up assault that tore open and ground filthy Munich earth into the inner workings of Kehl's knee. The resulting infection impeded the healing process, and Kehl, at one point a German national, began a frustrating run of near comebacks, ever-lengthening absences, and falsely optimistic prognoses, all while what should have been prime years of his career melted away. Indeed, with his innate leadership and domineering midfield game, Kehl was not unlike the iconic Michael Ballack, as hsi career arc could have been similar -- only Kehl played on weaker, cash-strapped teams, and his career-threatening injury occurred much earlier. In the wake of its financial difficulties, Borussia's fortunes on the pitch and the board room began to resemble Kehl's mangled knee.

When Jurgen Klopp arrived from Mainz in 2008, however, Kehl's fortunes initially rose with the team's. He was at leat passably healthy for much of 2008-09, and in the Spring of 2009, the club came tantalizingly close to a return to European football -- a remarkable achievement given its financial instability. Sadly for BVB fans, however, Kehl succumbed to an adductor injury and missed most of the next season, as well.

One can forgive fans for beign a bit skeptical upon hearing that Kehl was healthy to start the 2010-11 season, and ready to captain the promising young guns in the new Bundesliga and Europa League campaigns. After a midweek win over Qarabaqh had the stands buzzing (and Kagawa Shinji's name on everyone's lips,) the club opened the Bundesliga campaign with a thud. Kehl was given poor marks for Borussia's opening 0:2 defeat to Leverkusen, though he had a goal disallowed controversially. 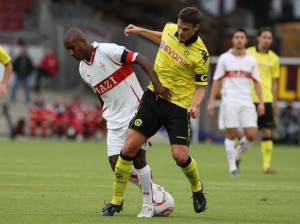 By now, the story of the next few weeks is familiar: Borussia Dortmund proved the opening defeat an anomaly, bruising past Stuttgart and Wolfsburg (not yet recognized as the relegation-threatened sides they would become) and securing their spot in the Europa Group stages against Karpaty Lviv. But as the team took the pitch in Lviv to claim their first Europa League victory, Sebastian Kehl's past caught up to him. An muscular injury -- in warm-ups, no less -- sidelined him yet again, and he missed the euphoric derby win in Gelsenkirchen and domination of Kaiserslautern. Meanwhile, his understudy, Sven Bender, cemented his place as the indestructible defensive destroyer alongside Nuri Sahin, whose own autumn season saw him establish himself as perhaps the league's top player. Although Kehl would return in the second half to see the pitch during the team's historic win in Munich, his appearances were little more than cameos. And Sven Bender, not Kehl, took a place on the national team.

So, while Dortmund fans were ecstatic over the team's rise to greatness, one can't help but feel a tinge of regret that the captain, who, like Dede, had been through so much with the team, couldn't play a larger role. Before writing off Kehl as a bit player, however, three points bear mention. First, each game is not an entirely independent event. Teams take to the pitch with whatever momentum or form they carry with them from the previous match. Despite the opening loss, it seems reasonable to speculate that Dortmund's Europa League wins against Qarabagh and their victories over Stuttgart and Wolfsburg helped to build the team's conifdence and momentum as they barreled forward. And, Sebastian Kehl was a large part of that momentum, playing excellent football in all four games. Without Kehl, who is to say that crucial rapid start would have occurred at all?

Second, Kehl did not simply disappear with his injury. He rejoined the active squad in the winter and likely continued to provide inspiration and leadership off the field. When he returned, he did not create controversy, but recognized his role and continued to provide an example for the younger players. We cannot see or quantify the effects of veteran leadership, but they exist.

Lastly, even with the team's dream season and Mani Bender's critical role in securing it, perhaps, with a healthy Sebastian Kehl, the side would have had the depth and veteran leadership necessary to progress past the group stages of the Europa League. The effects such progression would have had on the subsequent title run are highly speculative and debatable, but, suffice it to say, there would have been no stopping Borussia, regardless. Clearly, if only as a substitute, Kehl would have strengthened the team.

Kehl's role going forward is likely just that -- he has said all of the right things about proving himself without demanding a starting role. Like any competitive professional, he will fight confidently for his place on the pitch, of course. With Sahin off to Madrid and the grueling Champions League waiting, there is certainly a place for a defensive midfielder, even if he remains Bender's understudy. Although he might like to find additional minutes elsewhere, his injury history and the promise of European football liekly will keep him at Dortmund for the time-being. And if he can even temporarily break free of the injuries that have shackled his career, we may yet see some vintage performances in the days ahead.