Marcel Schmelzer and the Superlatives 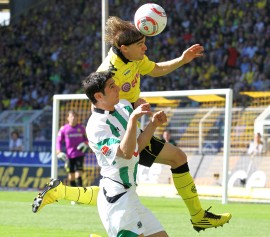 From a reserve to a professional. Replacing crowd-pleaser Leonardo Dede. Under 21 European Champion. Debut for the national team. German champion 2010/2011.

Great credentials for an only twentythree-year-old. But let us have a look on the life's journey of the native of Saxony-Anhalt. Probably the life of no other player of the current squad is so symbolic for the rise of Borussia Dortmund. He was born on January 22, 1988 in Magdeburg and transferred to the under 18's of Borussia as a striker in 2005. However Borussia suffered from great injury concerns that made it inevitable to retrain Marcel Schmelzer from a striker to a left-back. It might be that this change was center for his favorable career. With the arrival of Jürgen Klopp in 2008 things changed for Borussia Dortmund, but things for Marcel Schmelzer changed immense. As a inconspicuous player he never really arouse attention but was surprisingly promoted by the coach to the squad of the professional team just in the first year of Klopp's work. Later on Jürgen Klopp underlined that he had already a focus on the defender when he was coach of Mainz 05.

In 2009 Marcel debuted in the dress of the German Under 21s and immediate became European champion with his companion Mats Hummels and others. 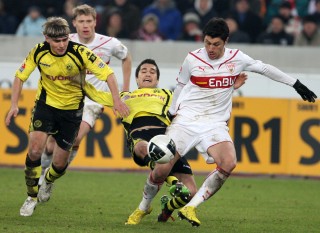 In the following season of 2009/2010 he really established himself in Bundesliga. After his idol Leonardo Dede suffered from a cruciate rupture and diverse other injuries, Schmelzer took his position in the defense and showed sound work over the whole season. Since 2099 a process began, that continued until the point, where Marcel Schmelzer who grew up with posters of Leonardo Dede on his wall, replaced his idol and gave him no more chance of going back.

On the 17th of November 2010 followed the next career highlight. During the match against Sweden (0-0) he debuted for the national team together with his teammates Mario Götze, Kevin Großkreutz and Mats Hummels.

The undisputed highlight was surely the German championship in 2010/2011. As the only player of the squad he absolved all 34 matches over the whole 90 minutes and was only forced to leave the field against Seville because of an unwarranted dismissal. After the season he was awarded by the German sports magazine Kicker with promoting him to the squad of the season. 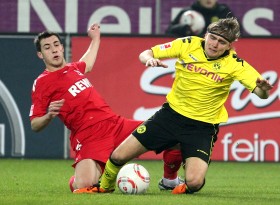 So far to the previous career of Marcel Schmelzer. But what does characterize the left-back with the 29? His dynamics and speed are only a few aspects that can be cited. Especially his irrepressible will to advance is obvious: While he played reserved during his first season, he now much more often presses forward. Unforgotten his action in Paris when he decided to overrun two Parisian players on the left flank and still managed to bring in a brilliant cross. Unfortunately Robert Lewandowski as well as Shinji Kagawa were not able to score the lead that would have been the win. Hard to imagine what would have happened in the nightly Paris.