The Day after Tomorrow 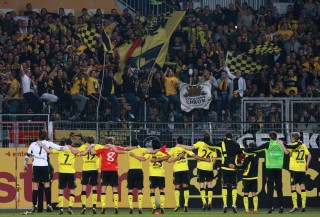 It might be a little unfair for our young, talented, overwhelmingly playing... well, I could go on for hours this way, but it might be a little unfair for our team to start like this, but it is really hard to find the right words after what happened this week when a thing we all knew it will someday happen was announced: Our number 17 will leave HIS club after this glory season! How could anyone of us come back to normal after a shock like this?

But in fact we need to return to the 27th matchday of the Bundesliga. Today's program: 1st FSV Mainz 05. The team trained by Thomas Tuchel was a very great surprise in the first half of the season when Mainz didn't lose until the 8th matchday and lead the table dominantly until Borussia took the lead. Up to now just one of the two predictions made in the last year became true: Many experts predicted that Mainz won't be able to play a whole season on this level. Those experts were right, although Mainz still stands on the 5th rank and didn't give in as tough as predicted. But many also claimed that Borussia won't remain on top of the Bundesliga until the end and week by week more negative forecasts came up. But checking the Bundesliga table we can see: Dortmund remained on top since we replaced Mainz as the front-runner! 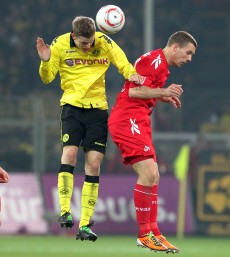 The last weeks were a return to continuity for Mainz- after the mentioned start on a very high level and an extraordinary 2nd place after the 1st half Mainz had some problems when the season re-started in January and so they „fell down“ to the 5th place where they are around since the 22nd matchday. For the first time during this season Mainz is in danger to fall below the „European ranks“, but they will – according to their mentality that's quite familiar to ours in Dortmund – invest all they have to take revenge for the loss in the 1st half against us. Especially young international Andre Schürrle will try to underline his qualities and show why Leverkusen signed him for the next season.

After our loss against the artificial whatsoever created by Dietmar Hopp Manni Bender who was replaced early by Toni da Silva will come back as well as Mats Hummels. The defender had to cure an abdominal injury and will after missing 2 matches return into the team and replace Felipe Santana who did a very good job as a replacement for Mats. Taking a closer look at Mainz we'll see that Adam Szalai (cruciate ligament rupture) as well as Miroslav Karhan (inner ligament rupture) and Marco Caligiuri (the flu) will be missing in the Westfalenstadion. There's also a question mark behind the position of the goalkeeper Müller, but Christian Wetklo would be a substitute without any loss of quality! 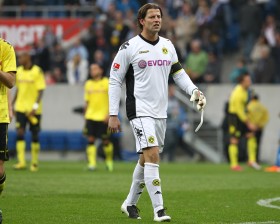 Now I could talk about things like the great reunion of our „Mainz-block“ and their old club, on the need to keep the distance to Leverkusen who will play against our unlovely neighbour who really gets to make himself laughable over and over again or other things, but I want to come back to Dede once again: I hope the team will do (and I am sure they will!) anything for our number 17 so that he can hold the „most popular salad bowl in Germany“ into the air once again like in 2002.

Attendance: 80.720 (sold out, although 400 tickets for guest fans will be available)