A great tour where only one thing was missing 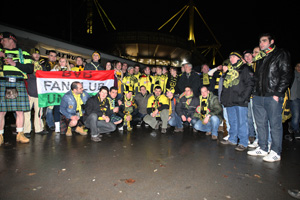 The 100 year anniversary against Freiburg from over a year ago was my last game in the stadium and I think you will excuse me for that since family comes first. I wanted to go to more games but somehow there was always something getting in between and so I had to stay at home. This derby however, I had announced very early and this time it should work out for me to be able to go to the Westfalenstadium again.

It was also a nice feeling that along with me 36 other people felt the same way and wanted to go to the Derby. For a group like this it is quite an effort to plan everything- from getting a ticket, to a bus, to a hotel and a lot more. Thanks to Petra and the Fanassistance we all got tickets and could finally deal with getting a bus and sort the other things out. Finding a hotel while there was a trade fare going on was a big assignment since we also had to take care of some of the wishes from our people. But, despite some non-predictable things, everything worked out quite well and the hotel got booked. With the bus the main point was a functioning heater since on the tour against Freiburg we arrived frozen in Dortmund and therefore the mood was not so well. However, this worked out quite well as well and calm as well as warm we were supposed to start our trip. 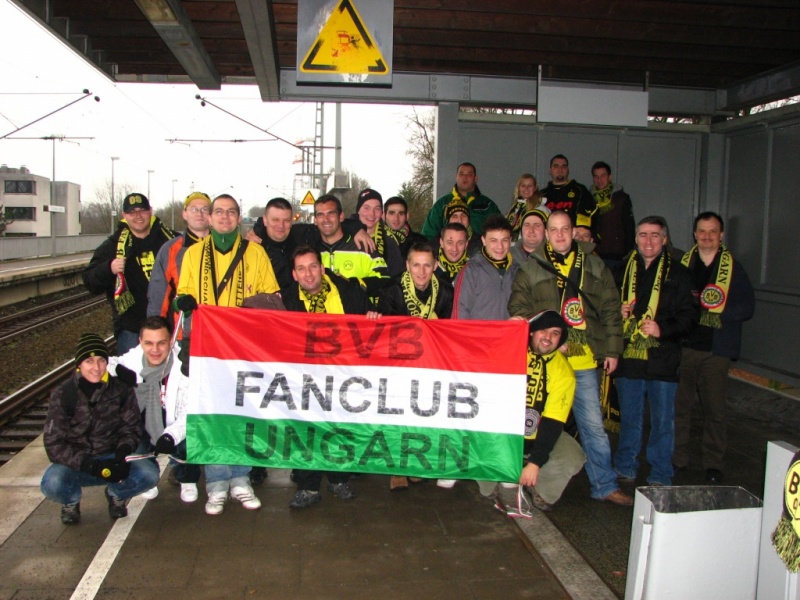 Now Steph from schwatzgelb.de got into contact with me as well and there was to be a meeting with international fanclubs in the Rote Erde before the Derby. Norwegians, Scotts, Polish people and some from Belgium had announced to be there. Of course we all wanted to be there as well. So everything was set and we were about to experience the 137. Ruhrgebiet-Derby live.

Finally the day of the departure was there. Our meeting was scheduled for 7:45 pm and what a surprise, the bus was able to start almost on time at 8 o' clock. We were hardly around the corner when the first beer and Jägermeister were opened. With quite some speed we got to Bábolna where 8 people joined us and from there it went on to Györ where again 3 more people joined us. Now the bus-crew was complete. The mood in the bus was good, except one little incident, since our anti- alcoholic Pokmalac kept a big eye on the beer and the Jäger. This is why he got the nickname Pokroka quite quickly. Everything was great. It was warm in the bus, beer and Jäger were cold and the mood was rising and rising. 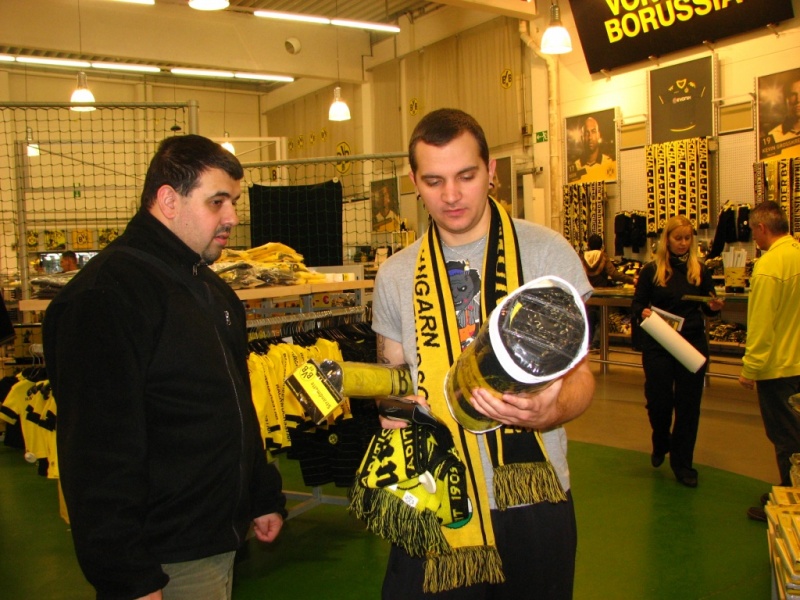 As it was expected the group got tired around morning and a huge part of it closed their eyes for a bit. But around breakfast we continued where we had stopped. A bit later than expected we reached Dortmund (the bus was only allowed to go 100km/h) but we were able to adhere to our program and therefore went to the MEGASTORE right away. I have been there quite often but there are always new people who are surprised and spend 120% of their planned-in money. For example there was one who only wanted to get a loadstone for his fridge and in the end he left around 60Euros in that store. Another one only wanted a jersey but came out with a jacket, a hat and other stuff from that store. Once again we left a bunch of money there but no one was sad and everyone wanted to wear the new things right away. Now it was time to go to the hotel and after organizing some things (at least rooms for 30 people) we were allowed to go to our rooms. There was not much time left since we wanted to go to the city as well. So everyone only had around 30 minutes to refresh themselves. As arranged we met around 2:30 pm at the station and after taking a picture we met Dirk and Swen. Now we were up to go to the city since we were to meet another group from Szabi. Next to the fanshop Krone we actually met them and so the 37piece group was finally set to go to the stadium. After a few photos in the city and a tiny transportproblem at the underground, we finally got going.

At the stadium I noticed two things especially: - here everything is always arranged, you can run around with fans from the other team, drink beer where you want to and except a few words and mockings with the opposite fans, nothing happens. /- there was a big team of policemen who jumped in right away when there were arguments occuring. First, they went inbetween with calming words and this didn't work, they used harder methods. 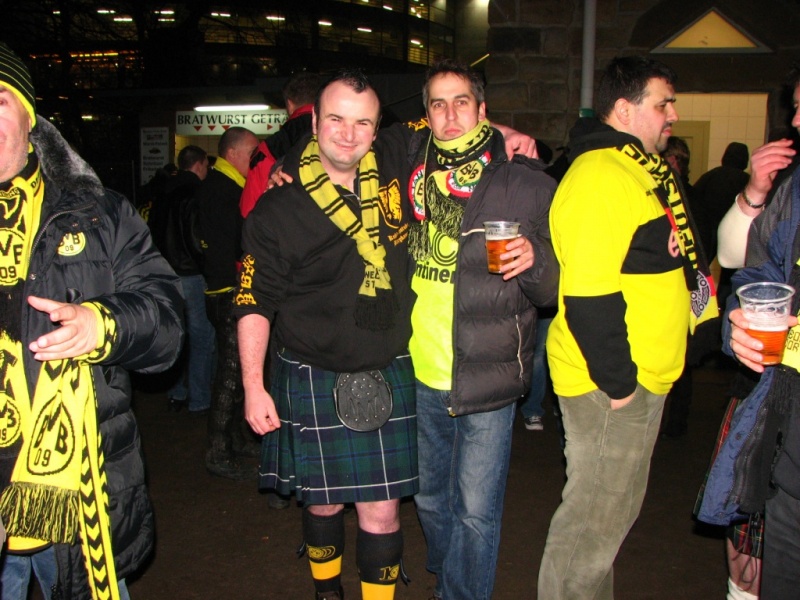 This didn't mean that there was no singing and that the mood was bad. The mood was great and once again we noticed, that it was good to be here. The meetingpoint was in the beergarden of Rote Erde and since we got there a bit early we destroyed our beloved bratwurst-beer-double. Around 5:30 Stephan came and along with him quite a few other international fans. It didn't take long until you started talking to everyone. Norwegians, Polish people, Scotts....simply everyone. I, for myself, can say that I really like the Scottish people and talked to them most of the time. Then Steph asked us to go in front of the stadium in order to take a picture all together. Also some of the fans were supposed to give an Interview to BVB-Total. From our group it was Dirk who did that, he had talked to the WDR earlier and knew already what he wanted to say.

Unfortunately we had to seperate in the stadium. Dirk, Swen, Gery and me, we went to the Southtribune and the rest wen to Block 82. On the "Süd" we were able to see how they hung up our flag like they always do it on the Southtribune. An hour before the game it was crowded and started warming up by singing. Tiime went by quickly and finally the teams showed up on the pitch. As expected our BVB strived forward right away and after seven minutes the score should have been 3:0 for us already. But Neuer was always on the spot. After that there were quite a few more chances as well. In the second half, I think it was the 60.minute of the game, I already said: there will be no goal here today. Unfortunately I was right. There was either Neuer or the goalpost, Schalke always had some help. So the result was 0:0 and somehow felt weird. You were looking forward to this for so long and then somehow there was something missing- the cream on top. 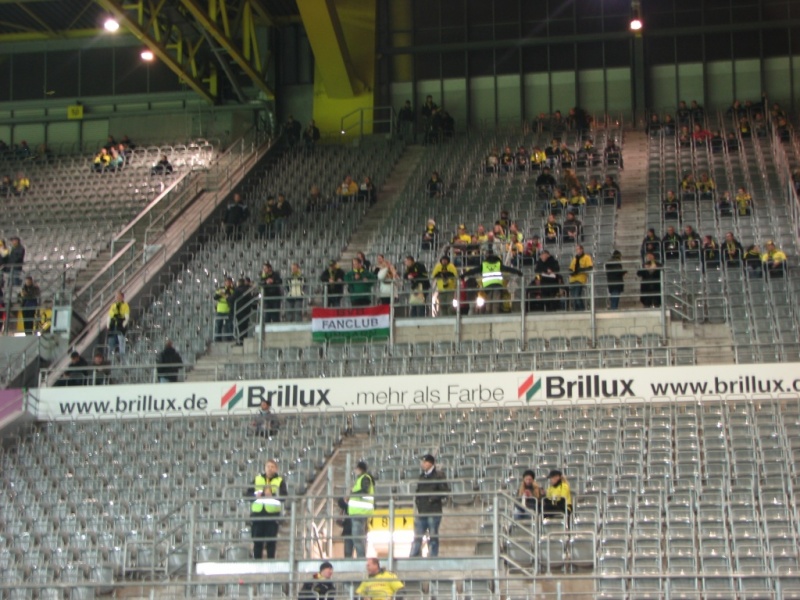 Now we met the rest of the group. They were disappointed as well and didn't understand how you couldn't win a one-way-game like this with 2-4 goals. After the game we wanted to keep on celebrating in the city as we had talked about it in the Rote Erde. But many of our group wanted to go back to the hotel and so only a small group slip from the big one in order to go to town, the rest went to the hotel with Dirk. In the city we ate and drank quite a bit and talked and laughed about a lot of things until we went to the hotel as well. 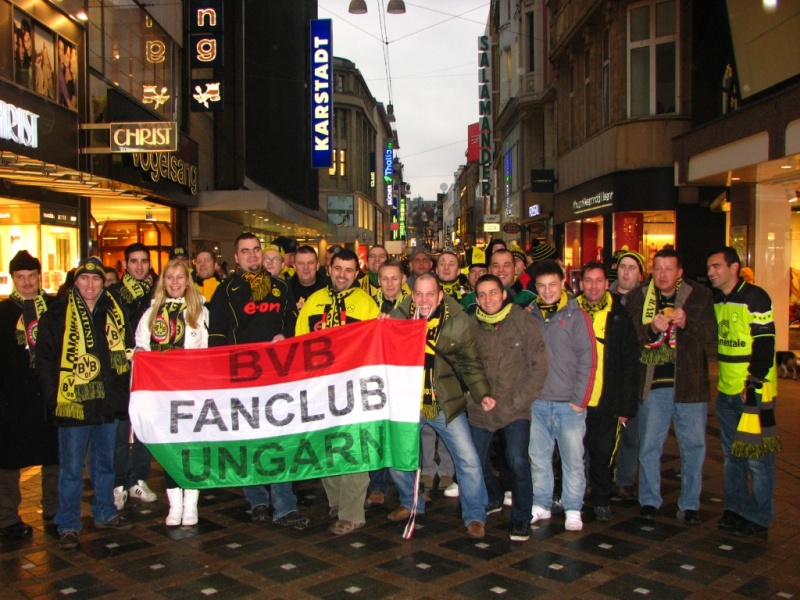 Around half past one a.m. we got back to the hotel and fell into our beds drop-dead. Around seven in the morning I awoke and finally around 7:30 I was able to awake my room-mates so that we could still laugh a little bit about RTL. Around 8 in the morning our departure was planned and after everything got settled with the rooms we were able to depart at 8:15. The first few hours we just hung around in our seats and relaxed some more. The previous day was quite stressful after all. Then we held up some cinema in our bus and it took us until "hangover" and "me, myself, and Irene" until a big part of us burst out in laughter. Then we got nostalgic about the UEFA-CUP game against Lazio Rom in 1995. Of course we knew the score but it was nice and lifted the mood. Now the first messages from the results of the day came in and sinze "kusen" and the "bauern" had lost the 0:0 didn't feel so bad after all. Then we looked another aggregation of the last season and then in Györ and Bábolna the first ones got out and went home. I was the last one to get out of the bus, since we had to check and clear everything out. Then I said good-bye to the busdrivers with whom there was no trouble on the whole trip.

All in all it was a nice trip with a brilliant group. We met many new people. Thanks to everyone who was on this trip and share this experience with me. Thanks to Steph for organizing the fan-meetings. It really was an unforgetable experience. But with all the hustle I forgot to give you your present. We definetely still need to do that. Thanks to everyone who have helped organizing the tour( Dini, Petra, Dirk etc), everyone did his share in this one. Only this one goal we weren't able to organize.
I hope there will be as many or even more people than this time on the next tour me make since it is nice to belong to this big family.