Victory- there you go. 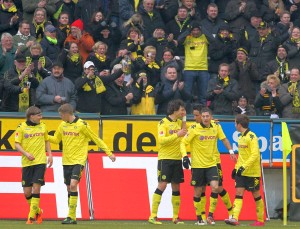 For all those people who tried (and probably keep on trying) to talk us into some sort of crisis, I am happy to say that our Borussia stays unimpressed and shuts their mouths by achieving a sovereign victory at home. St. Pauli, our opponent, that so called extraordinary team from the city of Hamburg, was not a jeopardy at any time of the game.

Due to one of the most ridiculous red cards ever given in football history, Neven Subotic had to watch the game from the stands (again), whereas Santana jumped into the central defense next to Hummels once again. Furthermore Kuba is still trying to cure his injury which led to Götze taking the place on the right offensive side and Lewandowski the spot in the center. As for St. Pauli, our "beloved" Asamoah got himself an unfortunate injury and could not be a part of the squad on that day. Too bad, we always like to welcome old friends.... 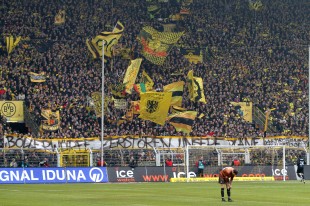 After losing the toss, Dortmund first had to attack on the side of our Südtribüne. And that worked quite well. From the beginning on, we were the stronger team, dominant in every part of the game. The only thing to complain about? All those chances again...The game looked just like Stuttgart and Schalke and partly Kaiserslautern reloaded. Dortmund made the game. The other team was watching and it didn't look like they made any effort to change that. While our Nuri Sahin appeared to be rather coy, Mario Götze was twice as eager. Somehow he appeared to be everywhere, alway with ideas for a good pass and always in the right place. How can one describe the first half of the game? Basically St. Pauli was hardly existing, while they tried very hard to be solid in the defense, our own defense must have been bored to death. There was just no work for them. On the other side Dortmund was constantly pushing foward, building a lot of pressure. In that time, they worked out opportunities en masse. Großkreutz in the second minute, Sahin in the 6. minute, Barrios in the 13. and Schmelzer in the 22. minute of the game- only to mention some of them. Our players acted either not focused enough or St. Paulis keeper prevented us from scoring. Otherwise St. Pauli found no means to stop us in anyway. Their defense was enormously lacking ways to keep us from attacking their goal. Only Kessler tried his best to save his team from falling behind and so Barrios (29.) and Sahin (31.) found their master in him again. Our boys played a good game. The defense appeared to be a bit unemployed which showed in Hummels playing a perfect pass from the defense onto Schmelzer, who was striving forward, as if he was our playmaker rather than one of the best central defender. But other than that our team played perfectly well....if only they used the chances that were given to them. At times this game looked just like the games before. Total domination over the opponent but in the end not forceful enough. The mood in the stadium was great though. We knew that we had to cheer them forward now, eventually they would score. And the players thought the same. In the 39. minute of the game, Götze decided to appear on the left side again and played a fantastic pass onwards to Sahin who was awaiting the ball at the penalty area. From Sahin the ball went to Barrios who handled it perfectly. Still in rotation he conveyed the ball into the right corner of the goal. 1:0 for us. Finally!!! Time for a break and some bratwurst and beer. 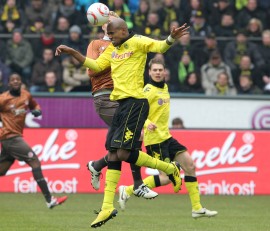 Basically the second half started the same way the first half had ended. We scored. Maybe it wasn't really us but we simply take that goal into our account now. Now attacking towards the St. Pauli fans, Barrios got the ball and strived from the left side into the center of the penalty area and then- well I am not to sure what he wanted to do. I think he wanted to play a pass (maybe it was a goal shot as well, even though the angle was quite sharp), however, the ball almost reached the goal where St. Paulis Gunesch was positioned and directed the ball into the goal. 2:0 for us. It was clear before, but by now we all knew that there was no danger anymore. Even in the smallest moments where St. Pauli tried to come close to our goal, our defense around Hummels, Santana and Bender were right there. They played an excellent game today. The only chance Pauli got throughout the game came in the 60. minute but then again, Weidenfeller was that happy to finally be able to do something, that he had no difficulties parrying that ball. Throughout this time Dortmund did not do much more than necessary and so Pauli found a little bit room to play some football as well. But at no point of the game did we have reasons to be seriously worried. A perfect example for this is our Manni Bender. I strictly don't want to point out certain players because I am a huge fan and deeply in love with this whole team. However, one scene in the 61. minute deserves to be told. It was the time when Pauli begann to play a bit of football again and we had lost the ball. At least that's what we thought. Then "Manni" Bender game. He jumped into that fight and I don't know how, but he got the ball back. From the pretty much most impossible situation ever. But, not only did he regain the ball, he then, half lying on the ground- half standing on his feet, played a perfect, even excellent pass to Schmelzer who was running foward into the direction of Paulis penalty area. After that the whole stadium applauded. When Bender first came, I didn't really know who he was but the way he has developed under Jürgen Klopp is almost a miracle. For no money in the world would I want to have anyone else but Bender on that position. All the Ballacks and who not can stay where they are. We got Manni. A few more chances followed: Piszczeck (71.), Lewandowski (73.) and da Silva (83.) tried their luck but in the end the game resulted in an absolutely deserved 2:0 for us. Excuse me, what crisis were you talking about again dear journalists? 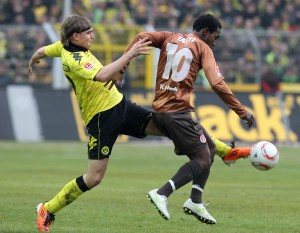 It was an easy victory. A victory that by all means could have been 5:0 but then again we decided to not torture our opponents more than necessary. We'll save that one for Bayern next week. It will definetely be a tough game and Bayern will do everything they can to keep the points at home. But I have a faith in our Borussia. Do the best that you can and we will be happy.
One more word: A special thank you and praise to our "Tele" Santana. This boy is amazing. For around three years he has been playing for our Borussia now. He has always been a substitute player and how does he handle it? Gracefully. Never complaining, never moaning, always supporting the team. And then there are moments like Subotics 5. yellow card or his red card and Santana gets his chance to play. And how well he used it. There was no getting through when he was there, and not only did he keep his area clean, he worked his way forward very well as well, always having good ideas how to open the game and how to get the ball into the offense withouth just shooting it there. A perfect game from his side. He got the deserved cheers from the people in the stadium. As the only player he was picked out to have his own cheers on that day. And he deserved every second of those. It is a pity that he has to be satisfied with the position of a substituteplayer that often. It is wonderful to have Subotic and Hummels in our team because they are amazing players, but then again so is Santana. And in every team of this league he would be in the first squad. But instead of complaining about that he is supportive in every way he can. He is representative for our Borussia at the moment. Not only do we have talented and great players, we have players with a strong character. And by that I mean every player. And this dear Borussia, is one of the reasons, why we love you so much and why you make us happy every week. Now, let's take off those "Lederhosen" of Robben, Schweinsteiger and Co. next week. 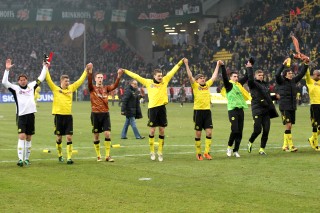