The Mitch Diaries - How does it feel? - Video 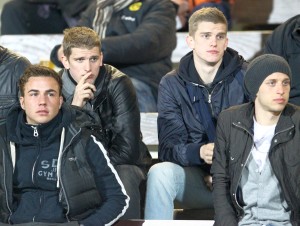 In a mediocre fourth league tie Borussia Dortmund II yesterday drew 0-0 at home to 1.FC Köln II. Only 725 fans had found their way into Rote Erde. It was a fantastic early spring evening and so the Bender twins, Neven Subotic, Mario Götze and of course Jürgen Klopp showed up to watch their team mates Patrick Owomoyela and Mitch Langerak play.

Mitch Langerak changed his name yet again. Whereas in his last game for BVB II stadium speaker and BVB II legend Uli Behle announced him as Michael, he yesterday turned into Mike. After the match the incredible keeper from Down Under talked about his last few weeks, about how it was to play in Munich, about his call-up by Osieck and about his fans Down Under. Enjoy the “How does it feel?” edition of The Mitch Diaries.