Kevin´s column: My aims for the season´s finish 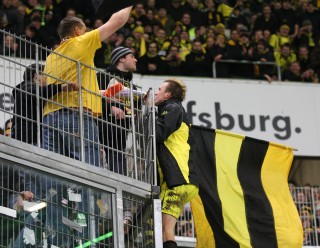 Kevin Großkreutz and the mighty Borussia did not care about four defeats in five games and are back on track with three wins in a row. The draw against bottom of the league Berlin should be nothing to worry about for the team. Today Kevin talks about his frustration with over 100 blues before the Derby, gives us his view on the Derby and explains what the team has conducted for the final six games. Kevins column – here comes the pro:

Unbeaten for four games now. Of course, Berlin on Saturday was not what we had figured out before. We were lucky to hold on to draw, even with Nuri missing that sitter right before the end. Then again: We have closed in to Leverkusen again, even if I could have lived with a Leverkusen win on Saturday.

But don’t get me wrong. We only think from game to game. That’s what suited us best so far. Sure thing we wanna secure Europa League in the last six games. But this will not be easy. A lot of people believe we will walk through our remaining matches. I say, that’s not exactly true. We will be facing teams that still have a lot to fight for. Never underestimate your opponent and the situation they are in. Adding to that, Mainz is pretty good at home. We need to be highly focused.

As we’ve been throughout the last few weeks. OK, the Derby was pretty goony. We were in complete control of the match and even scored the 1-0. Really, the Blues did not do shit, but then converted a set piece and got another lucky shot at our goal. End of story. Some minor incident around the Derby. Telephone-Terror. The day before the match I had 200 calls on my cell. Some Blues must have gotten hold of my number and called me – not to chat, I can tell you. I did not care. Let them have their fun. Still, threatening my life was a bit over the top. 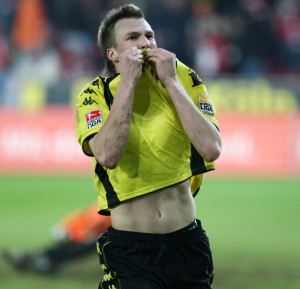 After that match we jumped onto a good wave. Thrashing Glabach, then the amazing match in Bochum, we should have easily been up by 3 or 4 at half time that day. Right before half time we got into some trouble but in the end we were superior. And then the unbelievable match vs Leverkusen. We had to give all credit to Roman during half time but in the second half Leverkusen stopped playing football and we scored at exactly the right time. We were on the roll and won the 50/50 encounters. And so you go on to win the match.

A small final ahead of us now. If we win, this would be a big step towards Europe. We need to find the gaps in Bremens defense. Werder attacks all the time, we need to take advantage of that. It’d be great, to keep the three points at the Westfalenstadion, to put some points between us and the rest of the race. There are some very good teams coming up. Hamburg’s got a great team and you should never underestimate Stuttgart. We need to stay alert during the remains of this season. I am very much looking forward to the final games and am expecting to end this season successful.