Travelling with Borussia to the city of love 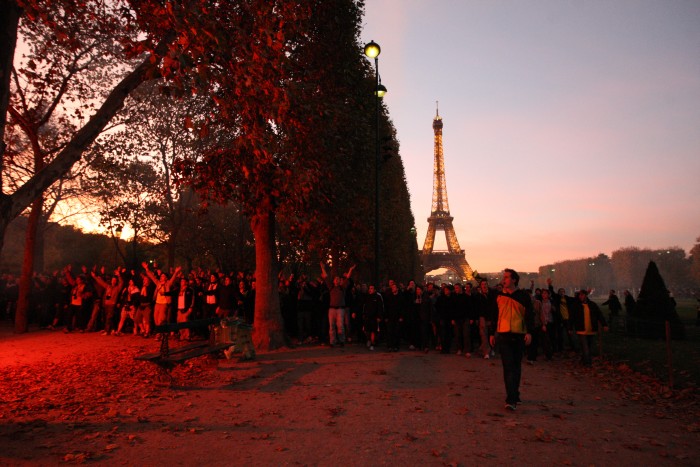 Two of our editors followed the mighty BV Borussia of Dortmund to Paris. Here are their individual experiences at the city of love. While we already provided you with a match report of the goalless draw and a video of the BVB supporters in Paris, these reports focus on the travel experiences and the atmosphere created by thousands of Borussia Dortmund supporters throughout the French capital.

We were due to start to Paris at 2 a.m. with a bus organised by the Away Sups Werdohl. So the four of us met up at my place at 8 p.m. on Wednesday for some starter beers. Since the plan was to get some sleep on the ride in a not-so-comfy position, we wanted to build a solid foundation to ensure maximum fatigue. An hour later we proceeded to the local pub "Der Zöllner" just around the corner to watch some Champions League action. The Dortmund weather presented its worst fall face. The rain was pouring down on us and we were soaked to our bones after walking just 200 metres. But that gave us the feeling of being on a journey even though we hadn´t really left home. All of us were dressed in black´n´yellow so it was clear to everybody around us where we were heading and we received lots of cheers. A couple of rounds (or rather quite a few) later it was time to move on. Everybody wished us well and we were ordered to bring three points back home. It´s a shame that we were not able to fulfil that task even though we did our very best and so did the team, but we´ll get to that later. 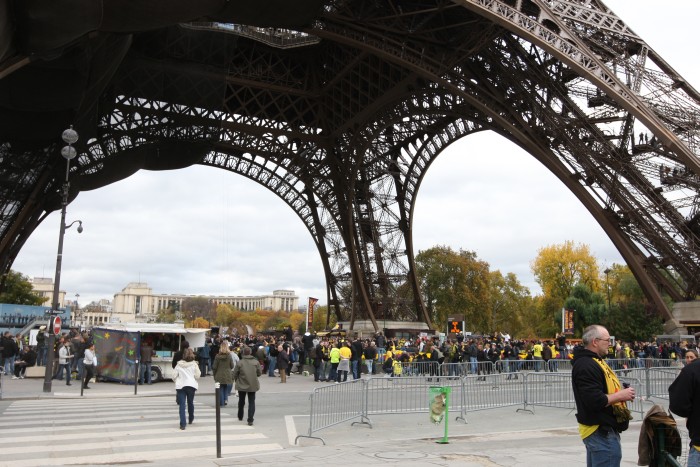 Dortmund´s main bus station was buzzing in the middle of a weekday´s night. It was packed with busses and Borussia supporters were all over the place. We met some friends and took the chance to stroll over to the nearest "Trinkhalle" (kiosk) to finalise our buzz to sleep-anywhere-level with some Jägermeister. Then it was finally time to board our cruiser. The worst expectations were not matched by it, but it was not the most modern of busses as well. Due to the fact, that I ordered the bus tickets and my name starts with a "W" we were the last to be allowed on board. But much to our surprise we found four free seats and the fellow Borussen around us seemed to be proper travelling companions. Some of us fell asleep shortly after we left Dortmund while others strolled around the bus to party on.

The next morning started with a shock to everybody on the top level of the double-decker bus: Cliff & Rexonah´s top-hit "Das ganz große Glück (im Zug nach Osnabrück)" (check it out on youtube if you dare) on full volume! Apparently the speakers downstairs didn´t work so the people down there figured they had to turn it all the way up to hear something. Cheers lads. It turned out that we were in france but still some miles away from our destination. We could not wait to reach the city of love to spread the true love we have for our club.

When we finally crossed the city limits it was rush hour so we had a good look at the Stade de France in St. Deniz, as it took us about an hour or so to get past it. After a seemingly endless traffic jam we got to the bus parking next to Roland Garros, the venue where the Tennis French Open are played. Lots of busses filled with Borussen had already arrived there (in the end over 100 busses drove from Dortmund to Paris!) so we saw beautiful black and yellow all around us, when we stepped out of our vehicle. The temperatures where mellow and the weather cloudy but dry. 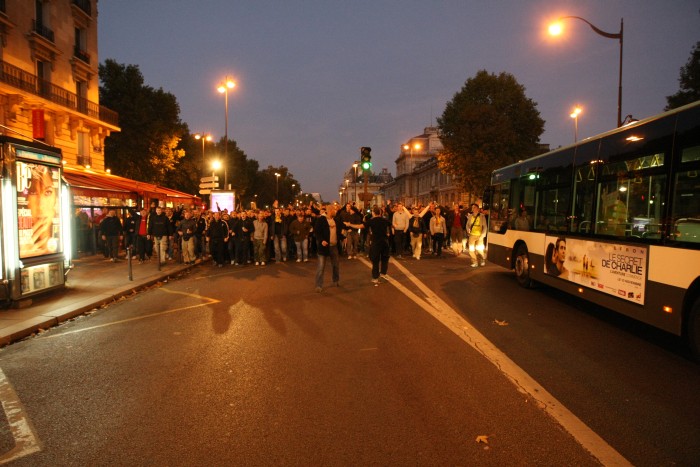 We asked the nearest Flic (copper) about the way to the city centre and where lucky enough to find a big Carrefour supermarket just down the road. When in a foreign land, it´s best to do as the locals do, so we opted for some shrimp, aioli, baguette and pastis for our breakfast. Embrace the culture of your host nation the best you can! The first Frenchman we got to know turned out to be a former DJ on Dortmund´s Brückstrasse, who still spoke perfect German. It´s a small world. Next we took the Metro to the Eiffel tower to meet up with the rest of the black´n´yellow army. All the way there you could spot Borussen singing and dancing watched by amazed Parisiens.

The whole area around Paris´ most famous sight was flooded with Borussia supporters already. Some where dancing and singing others relaxed on the lawn. Every Japanese tourist visiting the Eiffel tower that day could feel like a superstar for a moment, because he was inevitably greeted by the Kagawa Shinji chant. Once again the travelling section of the Borussia fans proved that they are the best ambassadors imaginable for their club. Peaceful partying, no violence at all even thow there was no police surveillance visible. For a moment, even the sun came out behind the tower and shone on the black´n´yellow hordes. This sight I´ll surely never forget. 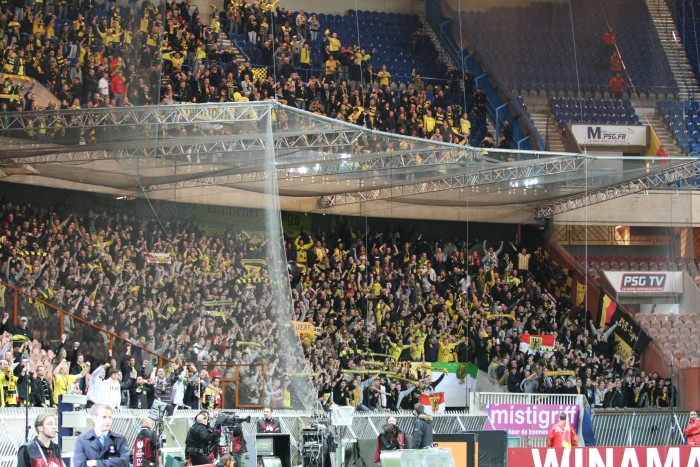 But soon it got darker and the time to travel to the stadium had arrived. The supporters formed a formation and marched through the city centre lighting flares and fireworks. Once again a sight to remember. Seeing thousands of Borussen walking through Paris, chanting BVB songs, made me really proud to be follower of this great club. Once again the locals stood by in amazement. No violence, no destruction just love for Borussia displayed. We reached the beautiful Parc des Princes stadium with no problems and stood in the guest section. Nearly half the crowd wore black´n´yellow that night. The stadium announcer had to turn the volume to maximum to try to drown out the chants of the away fans, but even that was completely in vain. The BVB supporters made the best out of being divided in three massive blocks all over the stadium by hammering a mighty B - V - B antiphony over the three sections. The team played well but did not manage to score. So after a goalless draw we stumbled back to our busses to head home. At 5 a.m. on Friday we reached Dortmund, tired but certain that nothing matches travelling Europe with the mighty Borussia.

One Night in Paris 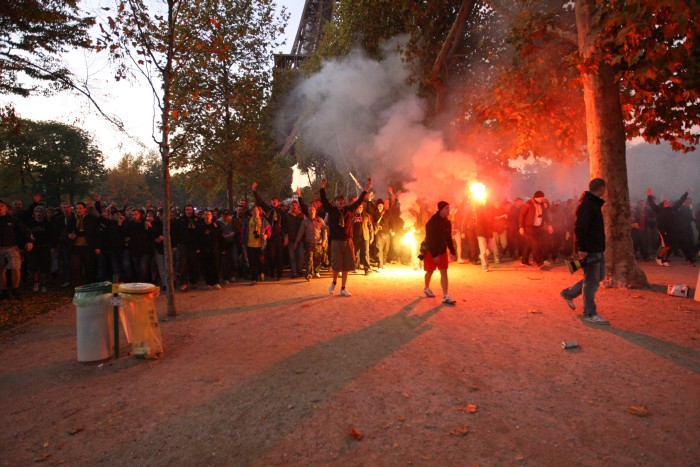 Some of you might know this headline in another connection but today I do not want to present a naked woman – although our team moved into the Hilton close to the Arc de Triomphe during their stay in Paris. The truth is that I want to share some impressions of the journey and the matchday in Paris with you.

Me and seven other mates chose to go to Paris by car. We rented a minibus and after equipping with the most important thing to survive (German beer) our trip started on Wednesday the 3rd of November at 9 P.M. The distance between our starting point and Paris was about 781 kilometers and we expected a journey time of 10 hours. We reached Luxembourg over Gießen, Koblenz and Trier close to 1 o'clock A.M. And we did not believe our eyes when we looked at the fuel consumption gauge – 1 € (In Words: ONE) per liter gasoline. The small town Wasserbillig must be heaven! 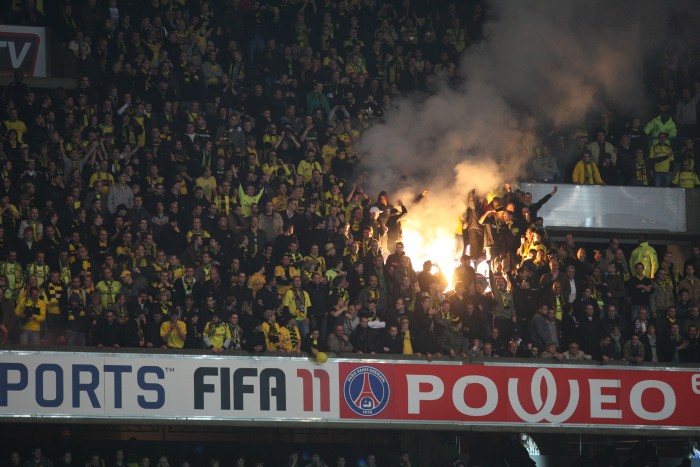 Strengthened through several cheap Luxembourgian cigarettes and some beer the ride continued and my tour group passed Luxembourg within 30 minutes. So we finally entered France and came across Reims. The city is really worth mentioning because of the view on a beautiful stadium next to the city highway. Unfortunately I am not quite sure whether it is the homestead of Stade de Reims or another football club. For the rest of the journey till Paris nothing special happened but I really have to appreciate the performance of one of our drivers while we moved in Paris – you cannot even imagine how frantic and disturbing the rush hour of Paris was. We finally reached our destination close to 6 A.M. but we did not have to wait long for other annoyances. The hotelier told us that we could not move into our room until 4 P.M. This was really unsatisfactory because of the fact that all BVB supporters would meet beneath the Eiffel Tower at 1 P.M. To make matters worse we needed to drive through Paris for three hours (!) to find a convenient parking lot for our three meter long vehicle. We returned to our hostel totally exhausted but under fortunate circumstances we were allowed to get into our room close to 11 A.M. Because of this opportunity we recovered from the journey and slept for about two hours.

Now we were ready to head to the Eiffel Tower and because of the chains of our supporters it was not a though task to find it. It was just unbelievable! All over the place were Black and Yellows – singing along our beautiful chants – representing our colors at the heart of France! We spent the whole afternoon among the shade of Paris' landmark. The whole group warmed up with singing, had some beer (thanks to the salesmen for the ongoing supply) and talked to some really friendly supporters of ours and of Paris Saint-Germain. 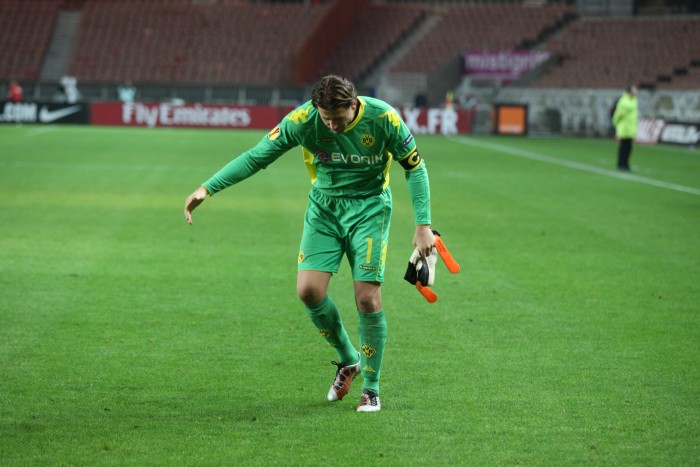 I really did not expect what happened near dusk: All 8,000 supporters of Borussia started to walk towards the inner city and the next metro station. Yellow flares made Paris to a Black and Yellow madhouse. It is obvious to me that I will not forget these pictures for a long time, especially the inhabitants of Paris, standing on their balconies, astonished staring – this moment was magic! The whole crowd stormed the metro station and transformed the trains into orchestras. Near the stadium we ate some French baguettes and equipped ourselves again with some beer. Finally we entered the home ground and looked out for our seats. The match was really interesting and the performance of the supporters of our beloved Borussia was brilliant. Unfortunately the match ended in a draw – just imagine what would have happened if Robert Lewandowski scored the 1-0 at the end of the match! With a dash of disappointment we walked through the night of Paris and returned back to our hostel close to 1 A.M. After a short night we started our way back home to the middle of Germany at 9 A.M. and reached our beds by 8:30 P.M.

All in all it has been an unforgettable journey with some little ups and downs!