Unfortunately that was not enough 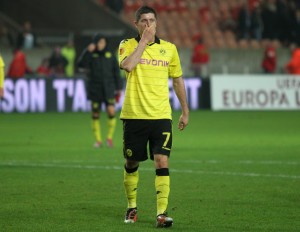 A homegame in Paris? Quite so. Maybe we can call this the reason why we did not manage to win in Paris. Our away games tended to turn out lucky for us during this season (lets count the cup game out) and the signs were good for a great game in Paris. Since Wednesday the city appeared to be covered in black and yellow as 10.000 Dortmundfans decided to go to Paris and support their beloved BVB on this hard game against Paris St. Germain. After the unfortunate tie a couple of weeks ago, the team was now eager to take home three points in order to get one step closer to the play off rounds that would follow next year. Sadly things do not always go the way we want them to go.

We were aware of the fact that Paris was a very strong opponent and depending on how this game would end, they could even become the team we would have to compete with later on. Three points were absolutely important. Dortmunds team started of with the same formation they had on the field at the victory against Mainz. Schmelzer, who had to sit out due to the red card at the home game against Paris, was now back in action, so that Dede could take a seat on the bench again; Still, it is great to know what we have such a great back-up on the position of the left defense. 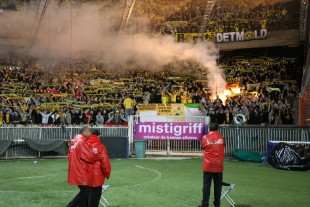 They were a beautiful sight these ten thousand black and yellow fellas that were spread across the stadium. Around 45.000 people fit into the Parc Des Princes and it was not even sold out. This really appeared to be a home game.

Up until the 18th minute of the game there were no big chances on either side of the pitch, however, Paris began very eager. Nice pass combinations were supported by very high speed so that Dortmund was pressed into their own half most of the time during those first minutes of the first half. Still they managed to adjust to the speed and were able to control the game in their own half, the deficit was that they were not able to forward this into the other half of the field and were therefore uncapable of playing out any chances on their own. Paris on the other hand got their first big chance in the 18th minute of the game when Erdinc headed the ball over the goal from only four meters distance. 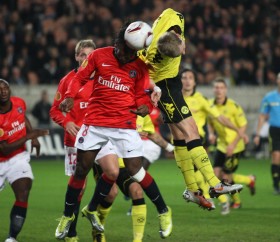 The problem in Dortmunds game was that they were just as eager as Paris was. Due to some reason, however, their passes were way too complicated, they tried too hard and usually failed for Paris' players were wide awake and detained Dormund from playing out any crucial chances. Paris keeper Edel must have been quite bored. On the other hand Paris had another chance in the 32nd minute of the game but Weidenfeller had an excellent day again (as he had had during the past weeks) and held Erdinc from scoring. The last five minutes of the first half were dominated by minor chances on both sides. Hummels headed the ball over Paris side after a freekick by Sahin, while Paris' Nene missed the goal with a shot from around 17 meters. Also Kagawa had little luck in the 44th minute of the game when Paris' keeper Edel got the ball before he did. Without any goals it was time for a break and hopefully some improvement on other side when it came to alarm in front of Paris goal. The attitude of the players was great, but their game was not accurate enough. 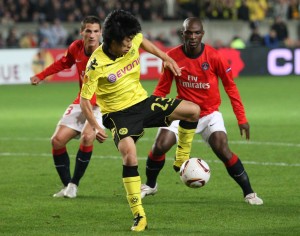 After the break there was a surprising change in our formation. Piszczek was exchanged for Kuba. Kuba, however, did not take over Piszczek's but Großkreutz' position. Kevin Großkreutz on the other hand now withheld the position of the right defense player. Paris continued the same way they had played in the first half- eager and at hight speed. Only a couple of minutes after the side change Erdinc headed the ball over our goal and yet another couple of minutes later Weidenfeller saved us again. It was a strange game. It was certainly not boring to watch but the goals or the big chances were not really existent. Barrios, who had been well shielded during the game, tried to cause some acion in the 54th minute of the game, but all that was not enough.

Ten minutes later it was time to thank Roman Weidenfeller again. With his amazing effort he surely saved us today, this time again against Erdinc. In the 74th minute of the game Dortmund had its first real big chance of the game when Kawaga tried to hammer the ball into the goal from quite a distance. A great shot that was parried by Paris' keeper Edel. During the last ten minutes of the game our BVB tried everything to get the ball into Paris' half of the game and possibly even into their goal. Lewandowski, Bender and Großkreutz tried to shoot the ball into Paris' goal but again their effort was not accurate enough.

What followed was THE chance of the game for us, and it is a dilemma that the players today were somehow not able to get the ball into the goal. Lewandowski was in front of Paris goal- all on his own, with a few Paris' players running after him- but instead of lifting the ball over keeper Edel he tried to tunnel him. Paris' keeper Edel parried the ball with his legs and the by fast-approaching Kagawa managed to hit Paris' keeper again, but just not Paris' goal. Only a few seconds later the whistle rang and the game was over. 0:0. No goals on either side. 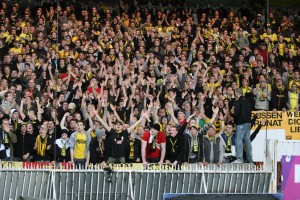 It was not a bad game from our side, but in the end there was always something missing while Paris also turned out the to be the strong opponent we had expected. A big compliment to both keepers, they made sure that both teams would go home with zero goals.

Where does this leave us? Well, since Sevilla won 4:0 against Lwiw and therefore stands at the top of the chart with 9 points, followed by Paris with 8 points, it will be difficult for Dortmund to achieve the play off rounds. We have 5 points in our account now and it is our duty to win the next two games. At the beginning of December Lwiw will visit us in our Westfalenstadion and only two weeks later we will have to play in Sevilla.
I believe in this team and I have great trust that they are capable of winning the next two Euroleague games. Nevertheless we have to admit that this will be a tough thing to do. I wish you all the luck of the world dear Borussia.

Attendance: 20.000 (roughly half of them supported Dortmund)