Lost after a fierce fight 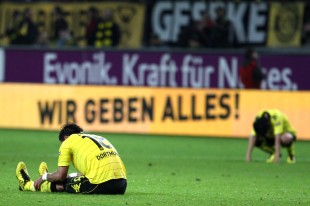 Borussia Dortmund's impressive series of won matches ended this evening when visiting Spain team FC Sevilla stole 3 undeserved points from Westfalenstadion. BVB dominated the first half but lost due to a mistake just before halftime and a undeserved red card for left fullback Marcel Schmelzer.

While Dortmund started furiously into this season Euro League with a historic 4-3 last minute win in Lwiw, Sevilla were beaten at home by Paris St. Germain 1-0. So the Spain side was really under pressure. Started as group favourites they already faced an early elimination in group stage. BVB on the other side were full of confidence. They had 3 points already and are also rushing up the Bundesliga table. So really a top start for the team and a dream for their supporters.

Nonetheless Sevilla received the respect they deserve. A really big side that won so many trophies during the last year. At the moment they are surely behind FC Barcelona and Real Madrid the third power in Spain. But it is also true that Sevilla had a horrible start into the season. Being big favourites in the Champions League qualification against Braga they finally had to surrender to the team from Portugal. Adding to that they performed lousy in the league too. After last week's loss against Hercules Alicante, former BVB striker Nelson valdez' new team by the way, coach Antonio Alvarez had to go. The new one is Gregorio Manzano. Sevilla started with a more or less defensive formation. Leaving top strikers Kanoute and Negredo on the bench Brazilian national Luis Fabiano started on his own up front.

Jürgen Klopp didn't make many changes. Piszczek started as right fullback, leaving Owomoyela on the bench. In addition Kuba started instead of young starlet Mario Götze on the right wing. 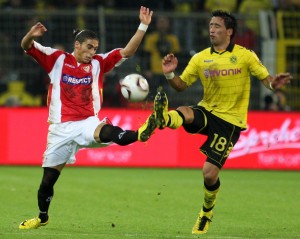 In front of 49.100 spectators Borussia Dortmund started like they ended the St. Pauli match. Kagawa with a neat pass to Großkreutz who appeared in front of Palop. Despite Palop's save the Dortmund winger was offside. Nonetheless it was like in the last matches – Borussia Dortmund all over the pitch. Sevilla had only minor ball possesion with Dortmund dominating midfield. Kagawa with a shot from 20 metres was the next serious approach. But it was also visible that despite having much ball possesion it was not that easy to break up Sevilla's massive defence. And adding to their defensing skills the Spanish side tried also the one or other counter attack, like in minute 14 when Perotti's cut-in missed Luis Fabiano who was waiting in the box. In the middle of the first half Lucas Barrios had his first chance. A fine high cut-in by Sahin found his head. Unfortunately his header was too weak to be any threat for Palop. And the top stirker from Paraguay now got taste of this. Only 3 minutes later he tried another head. Being much more powerful it needed Palop's best to save this one. And to complete this set Lucas Barrios had his third chance by head in minute 41 when he got touch of Sahin's pass. And again he missed the goal. And only 60 seconds later Barrios intercepted a Sevilla pass and appeared 20 metres in front of the Spanisch goalie. His fierce shot was cleared by Palop. While Borussia Dortmund just started to capitilize on their supreme ball possesion, the crucial moments of the first half were still ahead. In minute 45. Marcel Schmelzer did an unnecessary tackle on the left side. Referee Dean correctly booked the Dortmund left fullback for this attack. The resulting free kick was deflected and cleared by Subotic on the goalline. The ball found Cigarini in the middle of the box and with the half time whistle he fired the 1-0 lead for Sevilla! 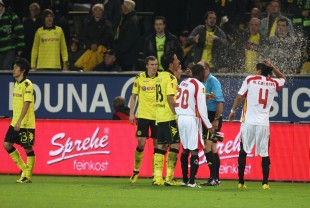 Borussia came back from the half time break with the will to turn tides. Like in the first half they immediatelly had ball possesion and tried to score the equalizer. But unfortunately Schmelzer's unnecessary yellow card from he first half came back onto Dortmund. Schmelzer running down the left wing a Sevilla midfielder tried to bring him down with a tackle. Jumping over the Spanisch legs Schmelzer fell down onto the pitch. Surely no foul by the Sevilla player but referee Dean overreacted and showed Schmelzer his second yellow card resulting in a suspension for our left fullback. And immediately Westfalenstadion turned into a boiling pot. The supporters were furious over Michael Dean's decision. As a consequence 3 players got booked within the next 8 minutes. Borussia needed some time to calm down the hectical match and create new chances. In minute 70 they were really close. A fine pass by Barrios saw Kagawa absolutely unmarked in front of Palop. His nice low shot left the Spanish goalie stunning but hit the left post only! Jürgen Klopp did some last desperate substitutions and threw in Lewandowski and Owomoyela. But this was now somehow an easy task for FC Sevilla. Being 11 against 10 men and leading 1-0 they circulated the ball within midfield and defence. Da Silva came in for Borussia Dortmund in minute for Kevin Großkreutz who was really outpowered. In minute 88 and 5 minutes into overtime BVB defender had another two chances by head. Both weren't successful and so this match ended 1-0 for FC Sevilla. 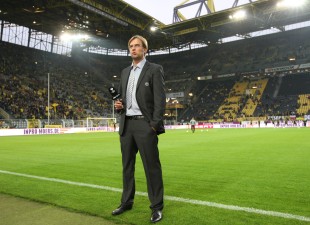 Jürgen Klopp: „It was a spectacular evening and a great match of my team. The second booking for Schmelzer was a wake-up call. Sending him off was really insane. We have to accept this result. The most important thing is that we again showed a good performance."

Gregorio Manzano: „It was a nice result against a big team in front of a nice audience. It is good having won against the probably best team of this group. We suffered a lot in this match, but won in the end. In our situation that is what matters."

Surely this win was not deserved for FC Sevilla. Borussia Dortmund dominated the first half and got in trailing position by an accident. Adding to that referee Michael Dean showed Schmelzer an undeserved second booking. Nonetheless with 3 points out of 2 matches Borussia is still alive and kicking. This weekend we will play Bayern Munich at home. There is even the possibility to storm the top spot of the table. 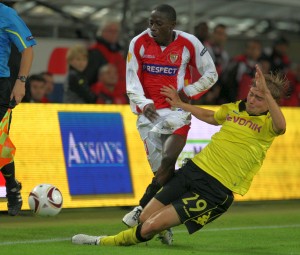