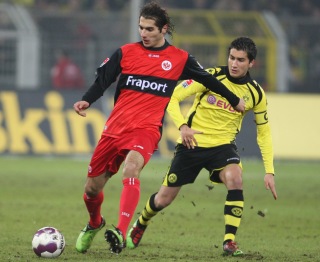 Just 10 days ago the sky was black-yellow. Supporters were dreaming of European football and some even had an eye on the championship. It took no more than 180 minutes of action on the pitch to deteriorate those fantasies. In a horrible match Borussia Dortmund came back from an early trail, just to receive another goal and end with a deserved 2-3 loss against Eintracht Frankfurt

The same story as last week. Our midfield is more or less not existent. Players like Kehl, Tinga , Feulner and especially Sven Bender were again missing. So it were at least good news that Zidan returned from the African Cup of Nations without being injured. Jürgen Klopp chose a spirited line-up. Ziegler, still replacing Weidenfeller, played behind Owomoyela, Hummels, Subotic and Schmelzer. In midfield skipper Sahin started next to Kevin Großkreutz. Adding to them Valdez, Zidan and young French prospect Damien Le Tallec were on the pitch. Up front Lucas Barrios was our sole striker. Santana, central defender in Stuttgart, was left on the bench.

On the other side Eintracht Frankfurt coach Michael Skibbe replaced Liberopoulos by Jung. Maik Franz moved to central defence while Chris started in midfield.

The match started in a good way for most of the 70.400 spectators in Westfalenstadion. Nuri Sahin in the first minute with a defence-cutting pass towards Lucas Barrios, who missed the ball by centimetres only. Only 3 minutes later it was again Sahin who found Valdez. His try to find Barrios was blocked by Maik Franz. And while the audience was waiting for Borussia’s first goal, it was Eintracht Frankfurt, that was now raising the pace. In minute 8 a high cut-in by Frankfurt skipper Ochs found Benjamin Köhler’s head. Marc Ziegler tried his best to reach the ball but had at all no chance – 0-1 Frankfurt. And to be true, the result was ok as Frankfurt had by now much more of this match. To add up the mess only 60 seconds later Halil Altintop, transferred from Sch’lke 04 last week, was up and away. For god’s sake Ziegler shut down this attack. Borussia Dortmund didn’t really get into the game and so the first real approach was a corner kick in minute 17. A too short defence landed at Zidan’s feet. The Egypt national player, who won the African Cup of Nations some days ago, fired a more or less forceful shot. The deflected ball found Mats Hummels 5 metres in front of Oka Nikolov. Hummels had no problem hitting the equaliser 1-1! But that wasn’t the ignition the supporters were hoping for. Eintracht Frankfurt was still in the driving seat. Only 2 minutes later Benjamin Köhler paced through BVB’s defence and again it took Ziegler all his skills to clear this chance. And that was how the match was going for the next 20 minutes. Halil Altintop had another 2 chance, one cleared by Mats Hummels on the goal line. Borussia Dortmund needed until minute 40 to create any danger for Frankfurt’s goal. A high pass by Sahin was stopped by Lucas Barrios. Unfortunately his shot was cleared by Nikolov. Nonetheless BVB was lucky to reach the halftime break without receiving 2 or more goals. Time for Jürgen Klopp to find some harsh words. 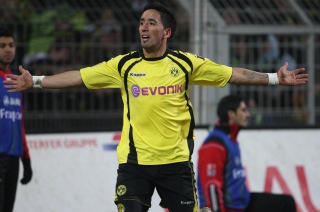 The second 45 minutes started a little bit more relaxed for BVB’s supporters. Eintracht Frankfurt wasn’t able to keep up their pace, while Borussia Dortmund started to win the one or another duel in midfield. And so it took until minute 57 for the next arouser. Owomoyela tanked down the right side and penetrated Frankfurt’s box. His pass found Zidan waiting at the corner of the box. His superb high cut-in fell down in front of Lucas Barrios, who wasn’t interfered by any defender and scored easily – 2-1 BVB! To face the truth, seeing the first 57 minutes, this lead was really lucky. Nonetheless Borussia Dortmund had now the chance to get away with 3 points despite a lousy performance. But just when BVB’s supporters were again thinking of the Champions League, our defence blasted those dreams. A corner kick was cleared by Owomoyela just to find Jung waiting in front of BVB’s box. His shot was unfortunately deflected by Sahin and so Ziegler had no chance to save – 2-2! Really a pity as we were somehow getting back into the game. But to add up the mess, only 9 minutes later Frankfurt hit another one. Selim Teber with a crossing pass to Alex Meier on the left side. Owomoyela was again looking not that good as Meier played the ball past Marc Ziegler – 2-3 Frankfurt! Really deserved for Eintracht Frankfurt but unnecessary. Borussia tried their best and had another 2 minor chances by substitute Mario Götze and Felipe Santana but weren't able to score. All in all they wouldn’t have deserved another equaliser.

After 6 wins in a row we are back on planet Earth. While the loss in Stuttgart was not really astonishing, this one really hurts. We could have raised our lead towards spot 6 to 8 points. Especially our defence and holding midfield was underperforming massively. Next week we have to face Bayern Munich, who are on a winning spree at the moment. It will be more than hard to steal at least one point at Allianz-Arena. 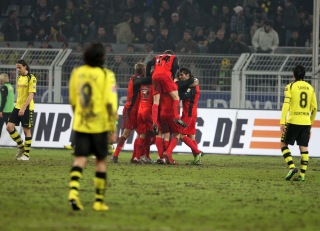 Jürgen Klopp: „The result ist deserved. Our only strong period was around our lead. But at all we were lucky especially in the first half. We lost this match because we weren't performaning well. Today we had 2 or 3 players on the pitch, who were more fighting with themselves than with the opponent. Eintracht Frankfurt deserved those 3 points.“

Michael Skibbe: „During the first half we had some quality chances. Our win was deserved. I always come back to Dortmund with joy. It is real fun to play here.”