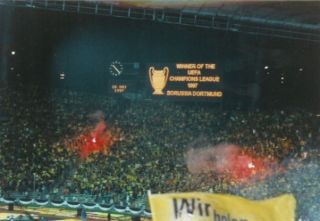 We give you a small round up.

Bayer and Bremen both are one point clear off us and have the better goal difference. This means we need to win two points more than Bayer and Bremen in the remaining two matches. Two wins could do the trick. Bayer plays Berlin (home) and Gladbach (away), whereas Bremen travels to Scheisse and faces struggling northern giants Hamburg at home in their final match. We await the current champion VFL Wolfsburg, who, since this weekend, have no chance of qualifying for Europe this season and travel to Freiburg on May 8th.

If we reach the 3rd spot we will go on to the qualifying match for Champions League and have a good chance of facing one of the big teams from England, Spain, Italy, France, Russia. We lose that match, we are qualified for the Europa League group stages. If we win we’d advance to the CL group stages.

This would be dreamland, of course, with a revenue of roundabout €20m. But also the three guaranteed home games in the Europa League group stage would expand our financial scope for the summer transfer period.

Finishing behind the 3rd spot, we would have to qualify for the Europa League Group Stage. Financially, that would mean almost no additional assets for our summer transfer campaign.

Let’s have a look at the league table first:

Bremen have also reached the cup final against Bayern Munich. Munich will at least finish second and qualify directly for the Champions League.

Bremen finishes sixth and wins the cup, Borussia on 5. Bremen will get the cup winners spot and enter in Round 4, Borussia enters qualification stages Round 3.

Bremen finishes fourth or fifth, wins or loses the cup final, Borussia finish on sixth. Bremen enter in Round 4, Dortmund in Round 3.

In any other scenario Borussia will enter the qualification in Round 4.

Will we be seated? 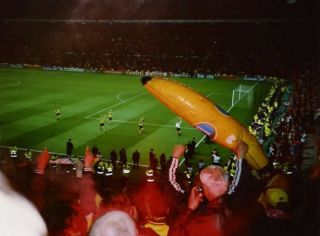 We shall be seated in Round 3 whatever happens, Round 4 is yet undecided. It would have been better, of course, if Barcelona had gone through to the final but it might as well just work out without that extra bonus.

It does depend on who qualifies for the Europa League and who will make it through to Round 4.

All of this seems pretty complicated. It is not, if we just finish the season on 3rd spot. And why on earth should luck be not with us this season? And at least one thing is for certain. You´ll be meeting us somewhere around Europe next season.