"Of course it is more fun in a kickabout area." 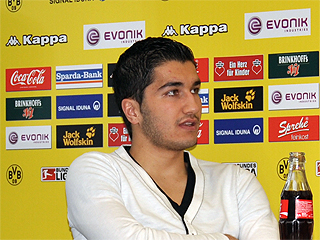 In the second part of our Interview Nuri Sahin talks about being compared with big players, his role as integration figure and chants of Dortmunds fans.

schwatzgelb.de: Do you and your team mates sometimes rub your eyes when you see that there are some many young players in Borussias line-up?

Nuri Sahin: No, we don't do that. We all know what what our capabilities are and we are not here to sit on the bench every Saturday and watch what Borussia does on the pitch. Of course it is a joy to see that there are five or six players on the pitch who are 20-21 years old and have success. We are all realistic, we know what we are capable of and we want to show that on the pitch.

schwatzgelb.de: If someone listens to the Interviews from Mats Hummels, Marcel Schmelzer or yourself it always sounds like you are that kind of nice guy the perfect son for every mothers daugther. Are players educated to be like that, to say nothing against the coach and other players and to say nothing bad about Schalke04?

Nuri Sahin: I can say something about Schalke or criticize my team mates and be in the papers for the next days. But I don't need something like that. This is about performance, it is about Borussia Dortmund and about me. I like it more if the papers write about my performance. We are not nice guys, if it is necessary we can be different and hit the fist on the table in the cabin. But that we are rather quiet people...everyone knows that, I believe.

schwatzgelb.de: If someone reads on the way you play you can almost read a praise. But it is remarking that you are no ratfink like Maik Franz or Stefan Effenberg earlier. How do you think on that?

Nuri Sahin: Stefan Effenberg was brilliant, the way he played football was, in my eyes, great. But that depends on the person you are. I can't force myself to become another Stefan Effenberg, that doesn't work. I am Nuri Sahin und just try to play my game. But, of course, you need that kind of player. Effenberg was an outstanding leader, but I am not like that and don't want to become like that. That wouldn't be me.

And I also wouldn't say that I am not hard on the pitch. I just received my fith booking and it is not ordinary for me to get that much bookings. I can be hard on the pitch – but not unfair.

schwatzgelb.de: Everyday you (the team) get tactical education and every day orders how to behave during the match. That is much more theory than in earlier years. But everyone is also a passioned player. Does it give you as much joy to play than earlier on the kickabout area, where you can play without orders?

Nuri Sahin: Of course it is more joy on the kickabout area. There are much less rules, you play with your friends just to have fun. I do miss that, but when I am on holiday I still do that with my brother and my friends and that's a lot of fun, I can tell you. But in our days is that, what we are doing here, also very important since you don't have any chance if you don't do it.

It is nice on its one way if you manage to knock out your opponent tactically. If you see that they don't get out, the coach was right, we did it well, that is something very, very nice. If you see that Wolfsburg (the actual German champion) at the match in Wolfsburg had not even one chance for a goal, had no chance at all, than that was a tactical masterpiece and we performed that tactic from minute one to minute 90 and after the match it was a real, real great feeling. 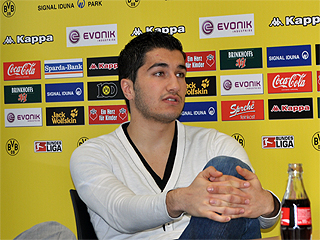 schwatzgelb.de: After some moves on the pitch some fans asks themselves if this move was studied or just created spontaneously. How much percent on a match are studied?

Nuri Sahin: You can't say that. In the defense you may be possible to say hat, there you know the strength of you opponent and try to cover the room or the opponent which might become dangerous. But in the offense there are that many creative player, so many different situations..there you can run tactically as you want. Someone who is very talented and can play that one pass or shoot the ball from 30 meters in the goal – you can't say that in percent.

schwatzgelb.de: Lately you have been playing such passes which leads to a comparison with Cesc Fabregas. How do you deal with that?

Nuri Sahin: This is not supposed to sound arrogant but I know that I can reach that level on which this player is performing and I want to reach it. I know that I can reach it if I continue to work hard on myself since I have the talent. I just have to continue to perform like I do now, stay well grounded and remain to estimate everything realistic.

It is absolutely normal if someone is compared to somebody else. If I was just BVB Fan an my favourite player would play two, three good matches I also would say: He could play there or there.” I, from my point of view, know what I can reach and everyday I work for that. That the fans think of me like that is very, very nice.

schwatzgelb.de: As a fan one asks himself: Do the players notice all that singing?

Nuri Sahin: If your name is shouted you notice that, that applies to me as well. During the match you notice something but you don't realize it, just perhaps when the ball is out. If Kevin (Großkreutz) scores everyone knows that “Wir sind alle Dortmunder Jungs (we are all Dortmunder boys)” is sung and that is real cool. But, during the match I had to ly if I would say that I am always thinking “What are they singing now?” or something like that.

schwatzgelb.de: Just talking about “Dortmunder Jungs”: How does it feel for you that this song is almost only song for 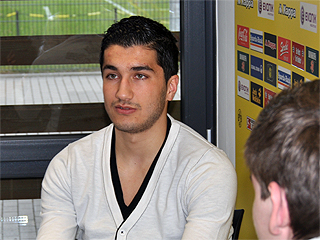 Kevin Großkreutz and not for you and you are not noticed as boy from Dortmund?

Nuri Sahin: I played in Borussias youth and I think of myself as boy from Dortmund. But it is not like I am thinking “Why don't they sing that for me?”. That is no problem for me. Kevin is just extreme (laughing), the boy is just not normal (great laughter). I think that is cool and he does just his thing. It's just nice that the fans sing that for him and I'm not jealous of him or something like that.

Josef Schneck: Everyone grants that to Kevin!

schwatzgelb.de: On the other side of the medal there are situations when the fans on the stands want you to sit down and if you don't do that they boo you. How do the players think of that?

Nuri Sahin: There are just matches, where you've lost the last three matches in a row and than, with a lot of luck, you just won when you don't wont to have a big party after the match. You want to celebrate when you thing “We did something great!” or win the derby or something like that. After a 3:1 victory against the champion or a 4:0 everyone likes to do that. But you have to have a feeling if it is right or not and I thing we manage that very well.

schwatzgelb.de: You are Turkish international and on your signature sessions there are a lot of turkish teenagers who are interested in you. Do you see yourself as a person who can help in matters of integration?

Nuri Sahin: Certainly yes. I do that and support such projects, Josef knows that as well and we support some projects together. Integration is very, very important for me since I know how it is. Thankfully I always hat positive experiences in that way and I want it to remain that way. Integrations figure for the Turkish children. An ideal, yes, I think I am one. They also live in Germany, are Turkish and see some players in the Bundesliga with the same roots, from the same situation. I try to act as a ideal for them. 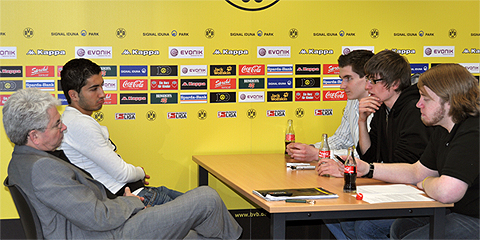 schwatzgelb.de: A few years ago there were no away supporters allowed at the match Greece vs Turkey and Turkey won the match without support with 4:0. Is it important that there are supporters in the back and is it different if there are 2.000 or 6.000?

Nuri Sahin: If you have that passioned supporters as Borussia has and in Berlin there are more than 10.000 people you realize that. Aki Watze said there will be 12.000 Dortmund supporters in Berlin – that is not normal and you notice that of course. Fans of Borussia are everywhere and make a lot of atmosphere and of course you notice that.

Nuri Sahin: At such a match you don't need extra motivation. Turkey against Greece is something like Dortmund versus Schalke.

Josef Schneck: Besides that Turkey must have been the clear better team in all matters (laughing)

The Interview was held by Jens Buschmann, Malte Schwietering and Sven Hausmann.

In the first part we talked with Nuri on the actual situation in the league and his personal development. In the third and last part Nuri talks about the derby, his heart, Borussias tradition and his personal future.