Going for the next one 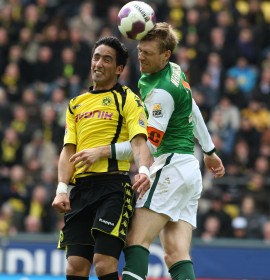 After the heartbreaking 4-3 victory in Lwiw, I compared the feeling of that evening to the feeling every supporter of Werder Bremen is used to. In the end, you win the match, no matter how bad the match seems to be. That was at the start of the season and if I had known that there will be several matches like this to come (Cologne away, Hoppenheim at home, Freiburg away...) and that we will be that damn good at this point of the season, most people would have called me a blind fanboy and would have only shaked their heads without understanding. Today, nobody would blame me for that. We are the winner of the winter championship, we are ten points away from secondly-ranked Mainz. Once again, I could enumerate all different statistics, but I will leave it with only a few ones concerning our opponent this Saturday evening, Werder Bremen. 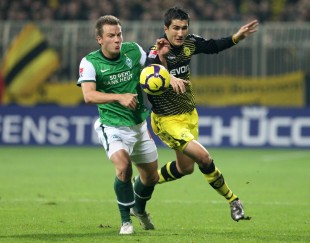 After the transfer of German National Mesut Özil who went to Madrid before this season, Werder Bremen has not found a legitimate replacement for the creative midfielder. During the first 15 days of the season, they struggled and found everything but one: stability. Being now at rank 10 of the Bundesliga ranking, they come to us with the statistic of only one victory and four defeats in their away matches. On the other hand, Borussia has won the last three home matches against Werder. So everything is fine and set up for another victory? Who could only think about the idea that we will lose a match after such a long period? Nobody, right? Well, (unfortunately,) it is not that easy. 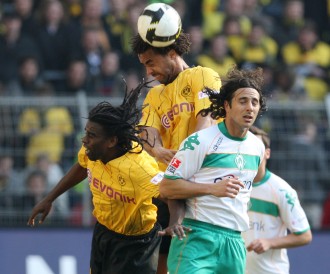 On the press conference before the match, Jürgen Klopp stated several times that Bremen is one of the best german clubs. Their offense surely is quite impressive and even though Claudio Pizarro is back in the forward area now, they still have to face several injuries and misses: Hugo Almeida (booked), Wesley, Borowski, Naldo, Boenisch, Vander. The biggest problem for Werder is their own defense. Naldo and Boenisch could not play besides Mertesacker and the right and left sides are also not the best of the best with Schmidt being a young guy out of the second team and some guys like Mikael Silvestre who seems to have lost all of his former glory. Therefore, one would assume that there is a pretty good chance to score if we overcome Goalie Tim Wiese who rescued his club several times this season so far. But be careful – during the last three matches, Bremen did not perceive any goal and beat Champions League winner Inter Mailand 3-0 (even though that was a pretty unimportant match).

So what about us? Lucas Barrios will probably be back in the squad after overcoming his little injury and will therefore replace joker Lewandowski who will probably be brought in after some time to score the decisive goal on the way to victory. The rest of the line-up should look like usual, Götze could be replaced by Kuba but I won't bet on that. Why should Kloppo even change something when this great squad keeps playing that good... hopefully on Saturday, 6.30 pm as well.