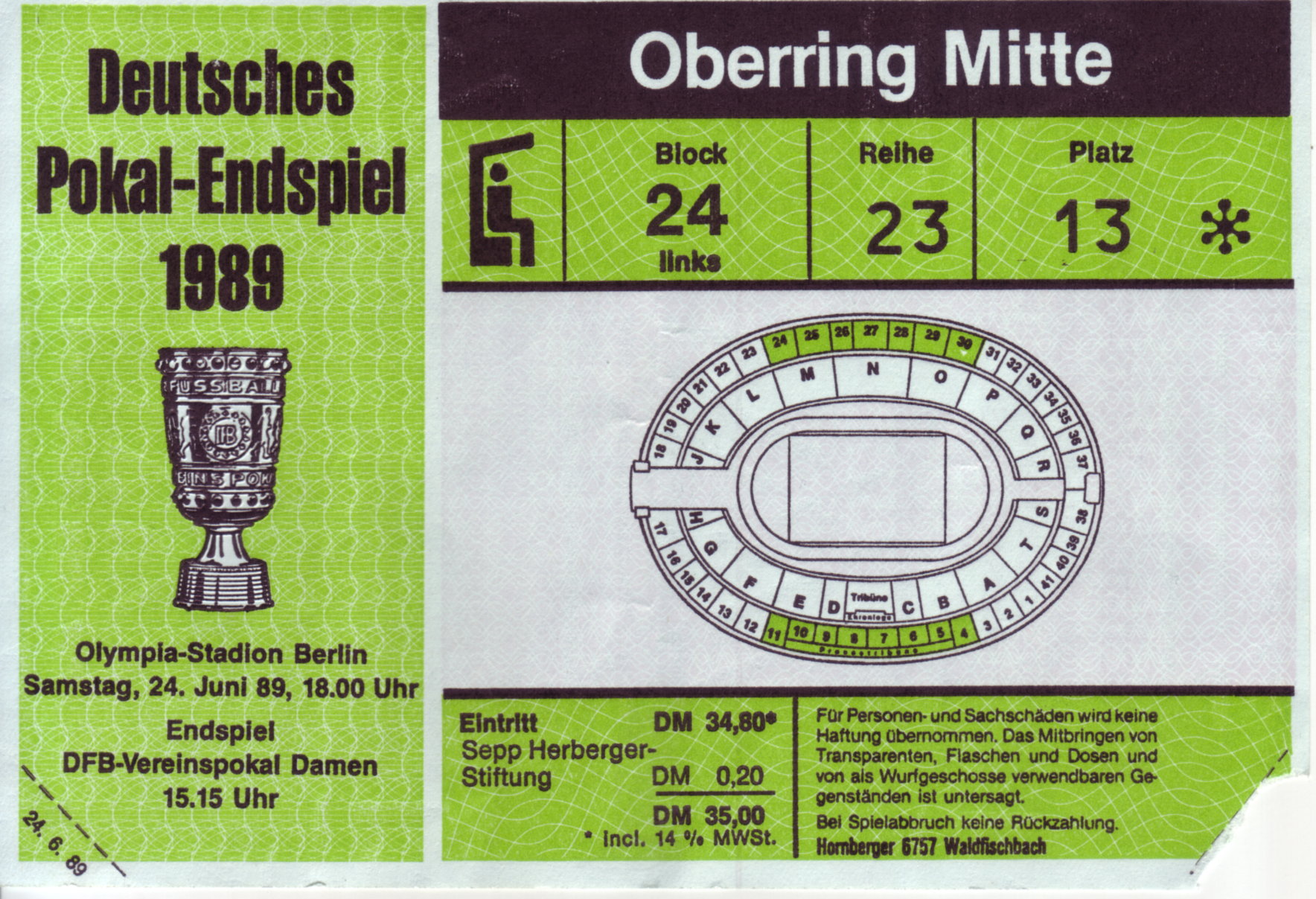 Borussia Dortmund and the cup…? Two issues that obviously don’t match! Well, we all must sadly confess, this conclusion is absolutely right! With the exception of 2008 when we lost the final unlucky 1:2 against Bayern Munich the cup never was a glorious competition for Borussia during the last 21 years! 21 years? Exactly! Because 1989 was a year which we always like to remember! Borussia won the cup against Werder Bremen in Berlin! It was a fantastic final, full of fascination and dramatic art! All of us who have watched BVB’s legendary 4:1 win live in Berlin’s Olympic stadium or on TV will never forget that match on June, 24th 1989!

It was Borussia’s first title, 23 years after the win of the European cup winner cup. Today schwatzgelb.com is trying to present you the atmosphere of that great day in June 1989 in retrospective! But our following article should not be seen as pure nostalgia! It’s an important chapter in Borussia’s club chronicle. On June 24th 1989 heroes in black and yellow were born on the green of Berlin’s Olympic stadium and for all eye witnesses it became a day full of great memories which will be for ever in our minds! 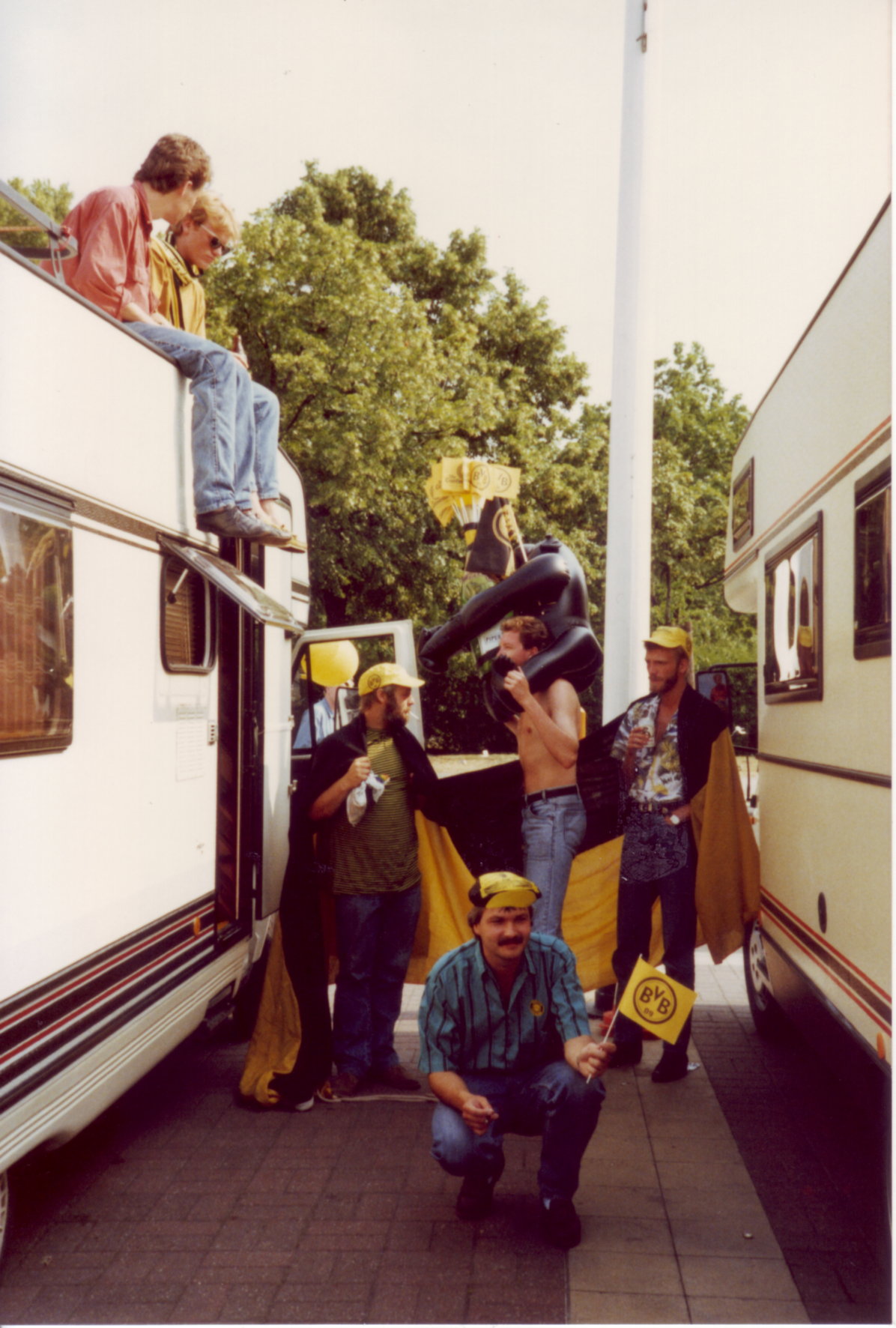 It’s astonishing how many details are still in the minds of my friends and me more than 20 years ago. To reminisce about the cup final 1989 in Berlin means remembering only positive impressions for all of us. And that includes everything: Of course the match and our spectacular win, but also people we met, jokes we laughed about and last but not least some positive superstition. So below please find my eye witness report of 21 years ago:

My friend Ralf and me decided to travel with Ralf’s car to the cup final in Berlin. No question that the car was decorated with scarfs and flags when we drove the highway A2 on Friday morning. For both of us was sure, that Borussia was the outsider compared to our final counterpart Bremen. Werder had finalized the season at position 3 and together with Cologne, Bremen was the hardest competitor for champion Bayern Munich. Borussia struggled hard to qualify for the UEFA cup but finally closed the season at 7th place. But inside the car our outsider mood improved more and more when we noticed how many supporters in black and yellow were on the way to Berlin! Thumbs up when we passed other cars with Dortmund fans or were passed by them. Even the border control in Helmstedt-Marienborn, when we entered the territory of former GDR, seemed to be a supporter of BVB! It was a strange and always depressive atmosphere when Germans were controlling Germans at a German border. “All the best” the GDR border official said suddenly, when he handed our passports back! For us a total surprise – the iron curtain and the wall still existed – but his words gave proof enough that football sometimes is more powerful than politics. One year later the border between the “two Germanys” disappeared – absolutely unthinkable on this Friday morning in May 1989! 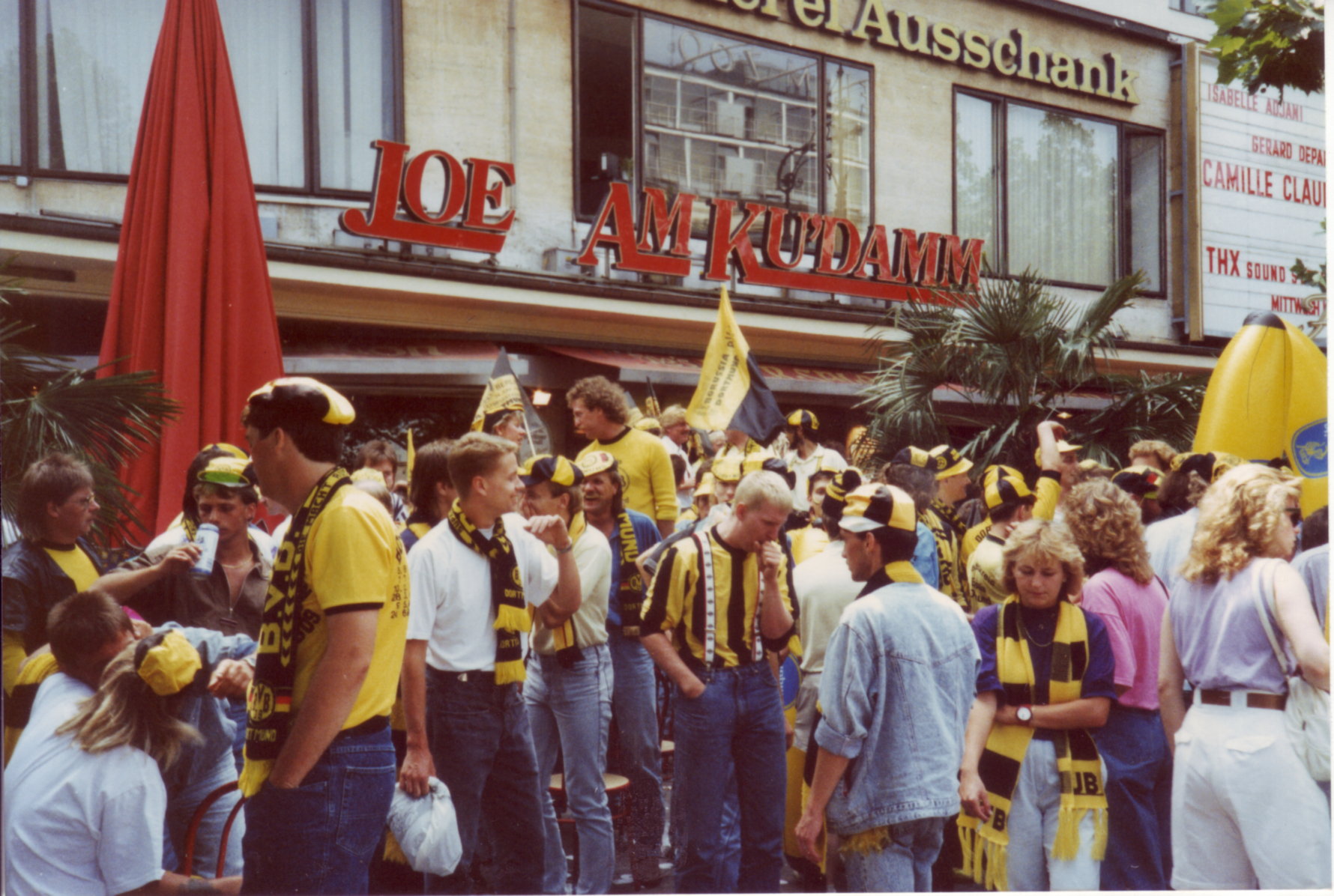 In West Berlin we stopped in Wedding, a district in the North. Friends of us had moved from Dortmund to Berlin some years before and offered us to stay overnight in their flat. In the afternoon we made a small sightseeing tour and drank some beers in the pub “Turiner Fass”. When we went to sleep late at night we both felt a special mixture of nervousness, anticipation and increased sympathy for Berlin and its habitants. All Berliners we met that evening wished us luck for the next day and very often we heard: “tomorrow you will be back again as cup winners” All these pub visitors – were they prophets?

Next morning we woke up with a little hangover. But after breakfast on our hosts’ balcony our hangover soon was forgotten. Perfect sunny weather – it should be the perfect start into a perfect day! We took the train to the center which was – and still is for the western part of Berlin – the area around the boulevard Kurfürstendamm and the ruin of Gedächtniskirche (Kaiser Wilhelm Memorial Church). It was breathtaking when we arrived! Thousands of Borussia supporters celebrated on the street and among them hundreds with big blow up bananas. A very clever marketing action of a well known fruit company, to hand these big bananas out to Borussia fans! It looked like a big stormy sea of bananas when they put them into the air.

Next to us a man at a stall sold scarfs, caps and other souvenirs all printed with “Cup final Berlin 1989”. We bought two BVB caps and immediately put them on. “Do you have green white caps for Werder Bremen?” a Werder fan asked behind us. “We don’t sell caps for losers!” the shopman replied in his Berlin slang! What a great answer! Berlin – Dortmund loves you! 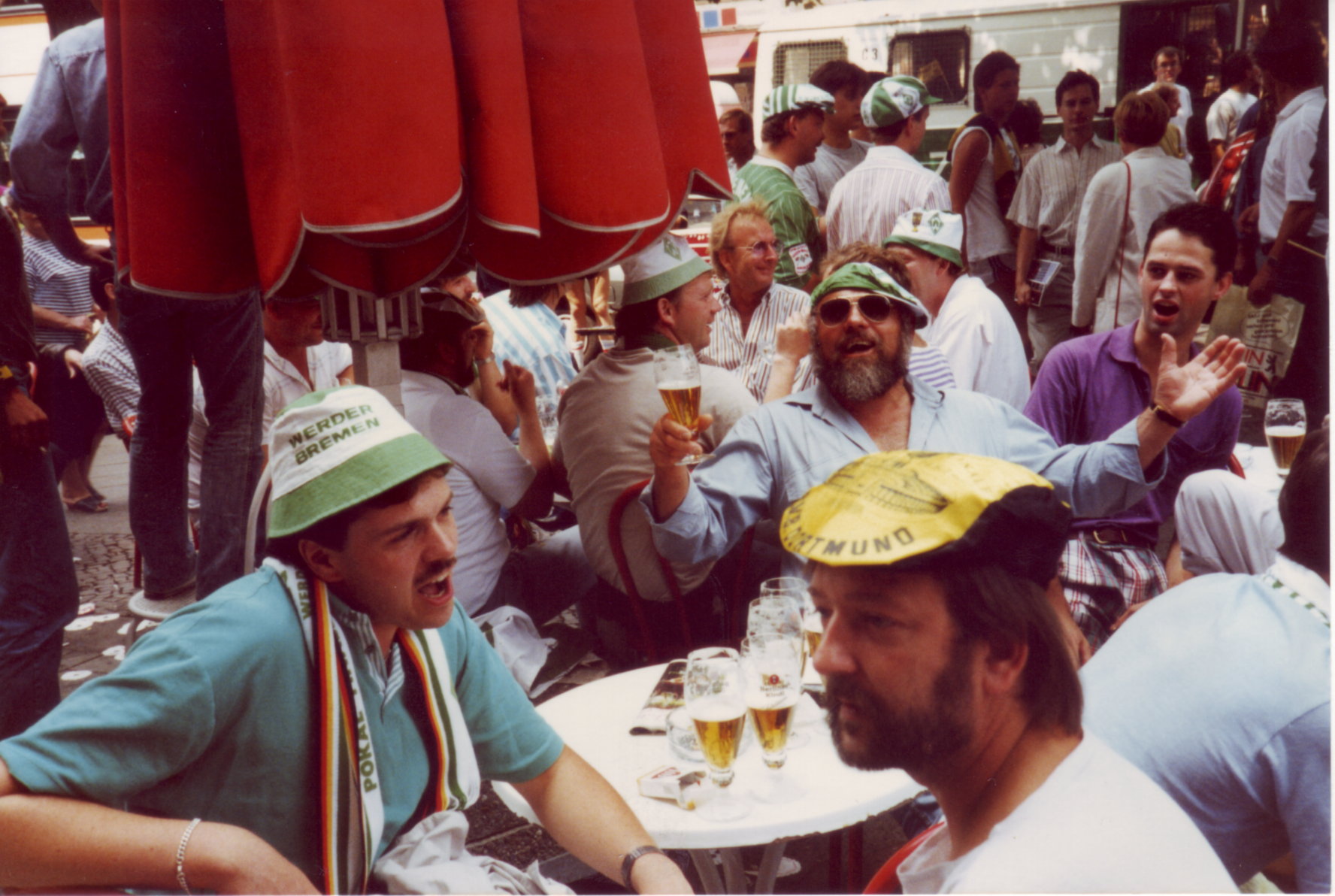 An interesting contrast to Dortmund fans anticipating the final was a gay and lesbian parade across the Kurfürstendamm. A risky project to allow such an event at the same time but it was absolutely safe without any critical incident. Partying gays and lesbians on one side, celebrating Dortmund and Bremen fans on the other. By the way - Bremen fans? The supporters of Werder Bremen were the clear minority group. To make a rough estimate, I think the relation was 70% BVB fans and 30% from the Hanseatic city. I think most of Bremen’s supporters were much impressed about the majority in black and yellow. Funny, when a group of Bremen fans beside my friend and me applauded passing police cars because of their green and white paintwork, the colours of Werder! 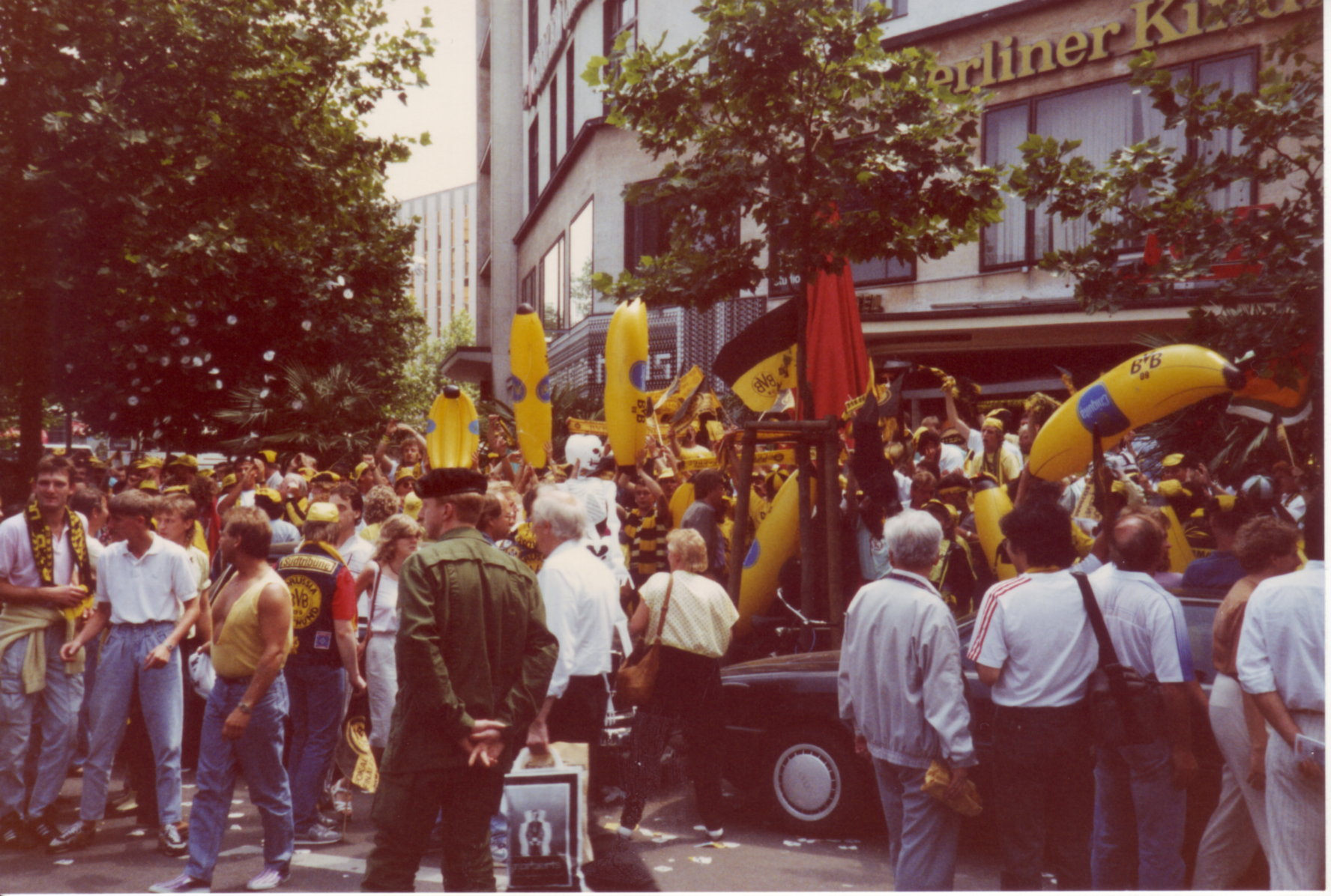 It was amazing to enjoy this great atmosphere and to talk with other BVB and Werder fans! No violence, no disputes. I think that day was also highly comfortable for police and ambulance staff. Our next stop was the railway station “Bahnhof Zoo”. Some other friends of us decided to arrive on matchday in Berlin and we welcomed them at the station. It was nearly the same picture as on “Kurfürstendamm!” Black and yellow were the favourite colours at the station and the chants remind us of a sold out Westfalenstadion! With the tube we arrived at Olympic stadium where we met again other friends, who just had arrived with a big mobile home. Now we were around 20 people in our group and we decided not to watch the cup final of women’s football (Siegen – Frankfurt 5:1) but to stay for another hour outside the stadium to enjoy the feeling before the match and to greet other arriving Dortmund fans. Luckily a totally surprised bus driver from Bremen sold us all his remaining cans of ice cold beer. Maybe, he knew that his passengers would not need so much beer for their way back home. 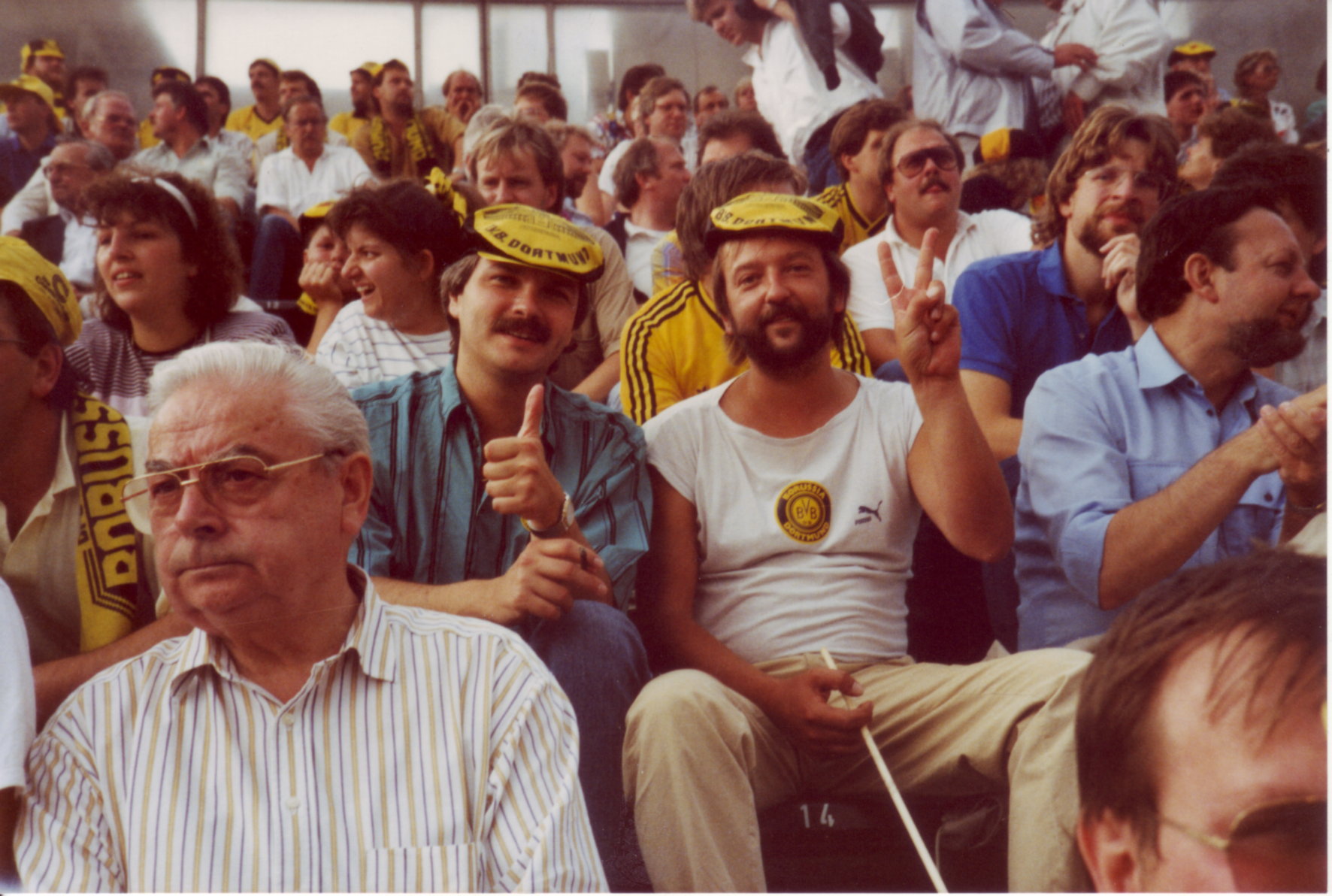 When we all sat down in the stadium the impressions were again nearly heart-stopping. The mighty Olympic stadium looked totally different than today. Only partially roofed, the green surrounded by a big red path for runners – totally different to our Westfalenstadion! And the relation inside the stadium was apparently the same as in Berlin’s city! 70 % Borussia, 30 % Werder! Could we lose today’s match with such a massive support in black and yellow? Our optimism began to grow but in minute 14 all our hopes began to melt away. Kalle Riedle, later one of Borussia’s Champions league heroes scored Werders 1:0 and it seemed that the favourite team would be the cup winner 1989! 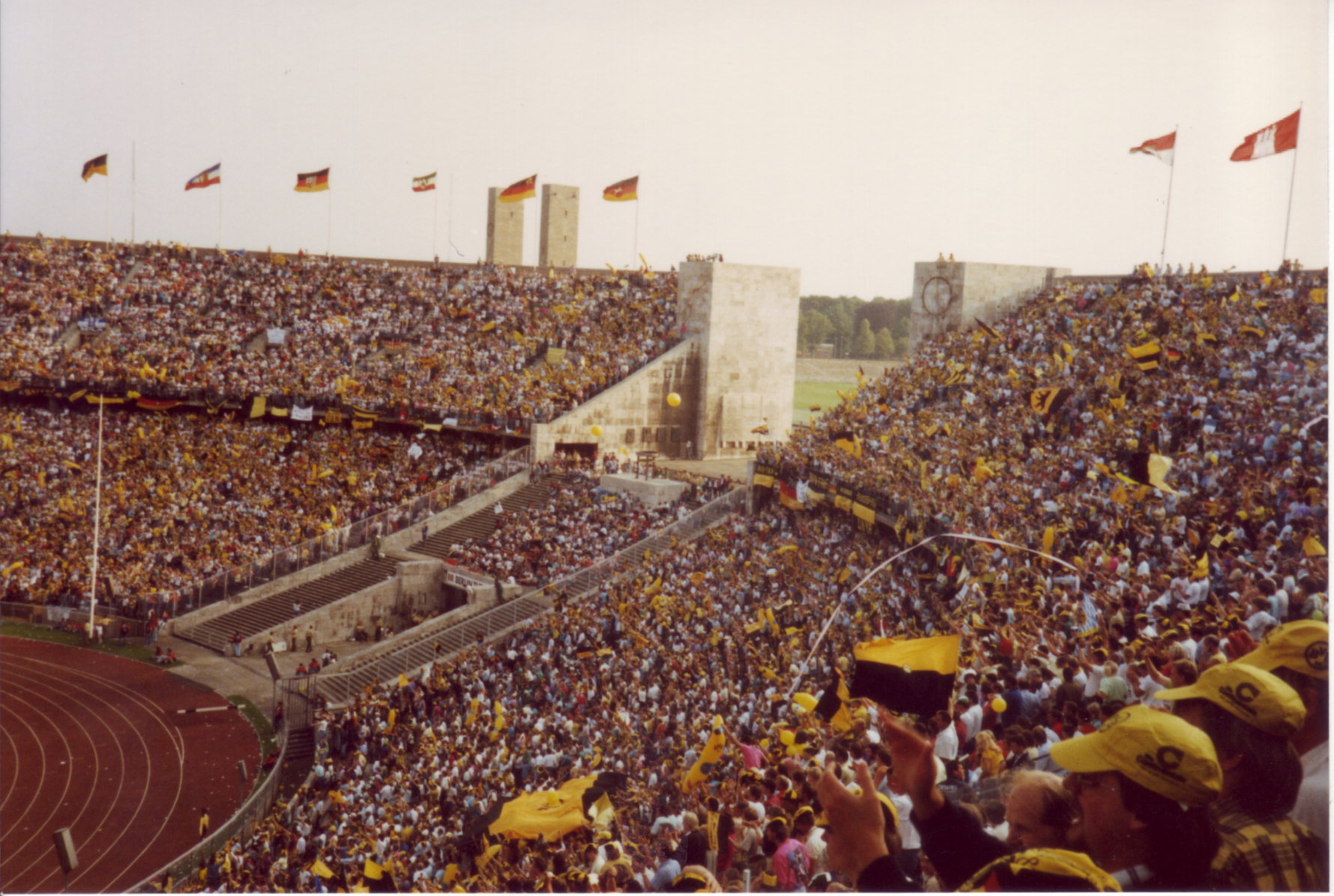 “Do you like a small cigar?” my neighbour asked me, showing me a package already open. “No thanks, I’m a non smoker” I nervously replied. “But these small cigars includes a goal guarantee” was his answer. I didn’t hesitate for one second and lighted up. Why not try it? Maybe, it was a help, maybe not! What happened now was real magic! I smoked the first small cigar in my life and during that time Norbert Dickel equalized! 1:1! In the 2nd half I tried it again and with another small cigar in my hand I saw Frank Mill’s header! 2:1 for Dortmund! “I promised you, these cigars include goal guarantee”, my neighbor remarked. “Let’s try another one to make it all safe!” When we smoked the next, we saw Nobby Dickel’s volley 3:1! Jubilance wherever we looked. People embracing who had never met before! Nearly needless to say that my neighbour and me smoked again when Michael Lusch scored the final 4:1! 4:1 – the black’n yellow underdogs had won the cup! Thank you Nobby Dickel, Frank Mill and Michael Lusch for four fantastic goals and special thanks to my “magic neighbour” and his “wonder cigars!” 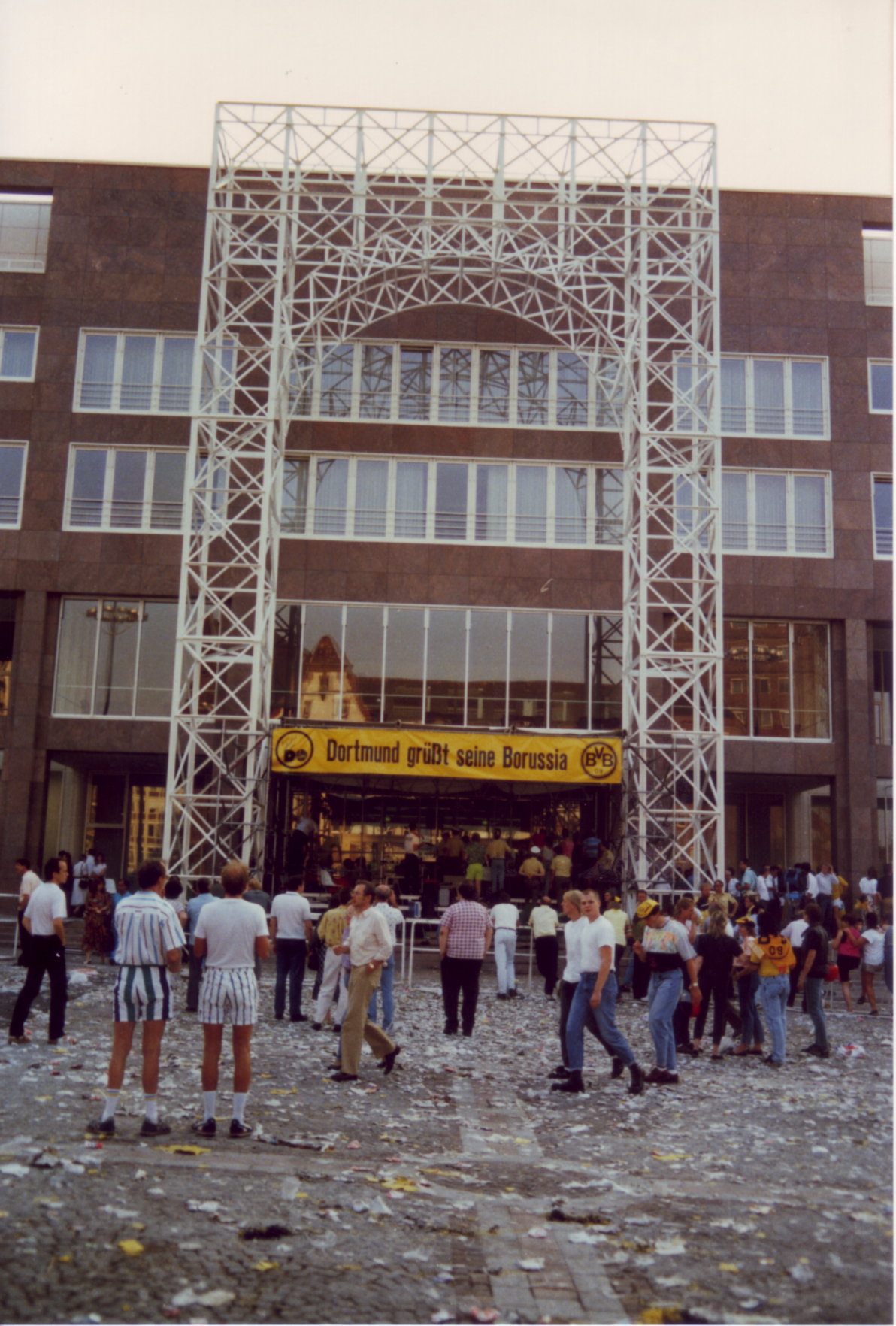 To be honest my friends and me don’t remember in detail how we finished that great day! Of course it was a long night with a lot of celebrations in various pubs and also a lot of cup winner beers! Our last stop was again the “Turiner Fass”. We embraced the prophets we met the night before. Their forecasts they made yesterday were absolutely right! “Cup winner 1989 – Borussia Dortmund, who else? We went to bed sometime in the break of dawn but we were on cloud 09! Driving back to Dortmund was like a triumphal procession. Other drivers honked the horns when they saw returning Dortmund fans. People applauded on bridges across the highway or at service stations and roadstops. When we arrived on late Sunday afternoon at Dortmund’s Friedensplatz and at that time new town-hall, the award ceremony for Borussia’s team was nearly over. But we all weren’t too sad! We saw our win live in Berlin, we experienced unforgettable moments and we knew the secrets of “wonder cigars” I got from an unknown but magic neighbour!