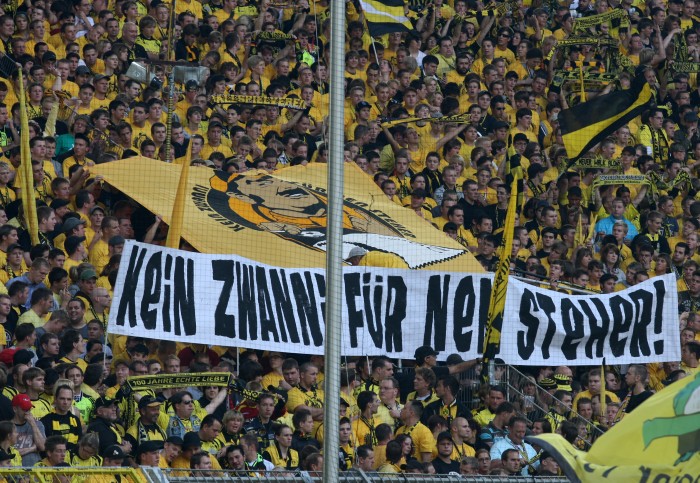 How time flies! More than two months have passed since September, 19th, the big day of the Derby against Gelsenkirchen. The glorious 3-1 in Gelsenkirchen might have been the initial spark for the unbelievable games that were to follow until today. Only Hoppenheim were able to stop the black and yellow ICE train for a second, still they could not stop us. When on September 19th and only a few minutes after the game some 800 Borussen made their way up Lindemannstraße towards Westfalenstadion and Rabenloh to welcome the Derby heroes, those 34 points after 13 matches were still stuff dreams are made of.

Amidst the surreal wins for Borussia and the nearly unprecedented euphoria in Dortmund one of the big achievements of that very day, September 19th, is slowly sliding into obscurity. The two weeks before the big Derby were very much influenced by the “Kein Zwanni” protests and the boycott against the price hike, which would eventually lead to some 2.000 Borussia supporters not showing up in Gelsenkirchen. For the first time in a very long time the Derby was not sold out. Borussia supporters had set an example and stayed at home. Ever since then the protest has slowly drifted out of the limelight. Of course, you will see the odd banner in the grounds week in and week out, but media focus has shifted to the next topics. “There is no action in Dortmund right now”, says Marc Quambusch, one of the “Kein Zwanni” spokesmen, and adds “there is no reason to do any PR right now. But as the banners inside the stadiums show, the campaign lives on and is still very much on people’s minds. We are extremely happy about that”.

That the campaign lives on across banners was proven last week on a Borussia Mönchengladbach site. A “biting, cynic and humorous” column on their official fanproject website circled around a subject worthy of discussion. Not only on other grounds away fans these days have to pay close to 20€ to get to see their team play. It also regularly happens in Dortmund when the club adds the top match surcharge. Including additional fees away fans then have to pay 19.70€ for a standing ticket. “Fundamentally the question should be allowed, if it makes sense to call for “Kein Zwanni für nen Steher” (No 20 Euro for standing) but then not to start the campaign in your own club/ground”, explains Daniele Schuhmann of Gladbach’s fanproject about the backgrounds of the column. Gladbach, who will be our opponent on Saturday, have not planned any action on Saturday however. “These day entrance fees are the last regulating screw for clubs to earn more money”, says Schumann and goes on “unless Borussia CEO Watzke succeeds [with his plans to shift more TV money towards the traditional Bundesliga clubs like Gladbach, Dortmund, Hamburg]”. Despite Gladbach taking no action this Saturday Daniel Lörcher and Marc Quambusch, the two “Kein Zwanni” spokesmen, say that “Kein Zwanni” is prepared to support any action taken by away fans in Dortmund. They explain: “If away fans have the feeling they are getting ripped off in Dortmund, we would of course solidarise with them. How exactly has to be seen when it happens in Dortmund. It depends on the form of protest they choose.” They are however a bit startled when asked about the Gladbach column: “We think it is a real shame that we are criticized for prices in Dortmund and that we don’t boycott our games. We just can’t do it as we are mostly season ticket holders, nevertheless we’d support every fan scene as much as possible “, they state. 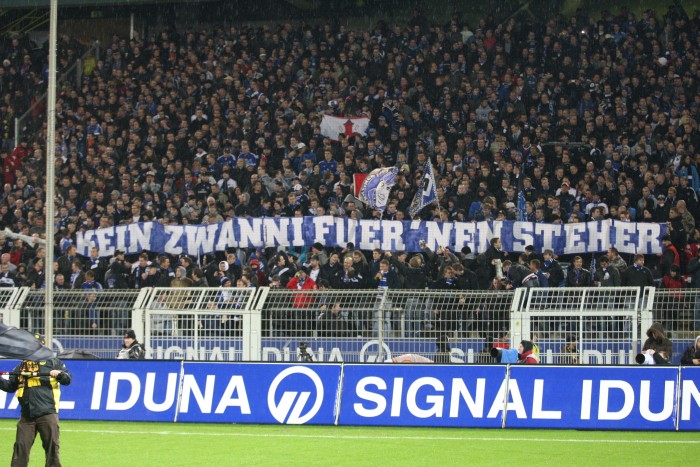 Those are no empty words, as activities over the last few months have shown. Ever since the initial boycott, talks with other fangroups have been held, amongst them the Schickeria München, Bayern München’s biggest Ultra fangroup, and the Union of 1.FC Köln supporters. “What currently matters is to gather our experience and keep up the infrastructure for the moment when somebody says: “It’s enough!”. They can then act in the light of our experiences and use our infrastructure. They don’t need to restart”, says Quambusch. But besides talks with other fan groups “Kein Zwanni” also takes an active part on other matters as well. A private letter to CEO Aki Watzke will be drawing attention to the high prices in Dortmund itself. Watzke, who has supported the Derby boycott and soared to be one of the loudspeakers for the traditional Bundesliga clubs over the past few years, needs to take position here as well. “Of course, we hope to get Watzke to support our aims. He has supported our boycott and we hope he will take a leading role here as well and ideally finds solutions in talks with other clubs. To move things on this matter, we need the backing of Borussia and especially of Aki Watzke”, explains Lörcher.

The campaign, which has reached down into the third league with Dynamo Dresden fans boycotting a game against RW Erfurt on October 16th, is still alive even if it is currently not in the focus of the media. By the end of this season September 19th 2010 will not only stand as the day of our first of two Derby wins this season but also the kick off day for the important “Kein Zwanni” campaign.