What happened in Seville 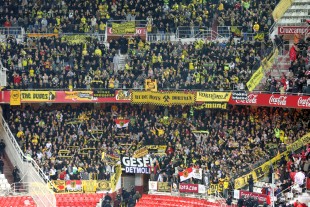 In November 2006 Eintracht Frankfurt face Celta Vigo for a UEFA Cup outing. One Frankfurt supporter goes on to spend the next 46 days in a high security prison, some 40 kilometers outside of Vigo. He gets out of prison on December 19th but has to report to the police every day until March 21st the following year. He then leaves Spain and starts a 13 day long march back to his home in Altöttingen. Something he vowed to do when imprisoned. He receives a five year long ban from every stadium. In April of 2007 Tottenham Hotspurs travel to Seville for a UEFA Cup clash. Pictures of that very evening show fights between police and Spurs supporters. During those fights one Spurs fan is clubbed out of his wheelchair. Tottenham files a protest with UEFA, the protest fizzles out.

A week ago, on December 15th 2010, some 3.000 BVB fans travel to Seville to support our team in their do-or-die match against Seville FC. During the day the fans enjoy the old town of Seville and the December sun, they meet in the afternoon and march towards the stadium. That’s when things start to go horribly wrong. Some fans need to take a piss, and are not allowed to by the riot police which is guarding the march. The police starts provoking the fans after a harmless brawl at the top of the march while herding together the BVB fans at the back. The heads of the BVB 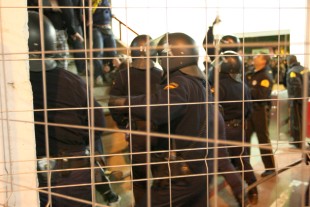 fans are treated with clubs. One eye-witness reports: “My father-in-law was forced to the ground out of nowhere. In Bosnian, his mother tongue he screamed from the top of his lungs: ‘I am innocent’. Police took this as an excuse to hit him even harder. He had injuries on the back part of his head, in his face and bruises on his upper legs.” The person forced to the ground was a 66 year old Bosnian, whom the turmoils in the 90s had taken to Sweden. He was infected with the BVB virus by his son-in-law. He is the victim of a willfully attack by the Spanish police. He will be spending his next day in custody, without sufficient medical treatment or food and water. On the way to the prison cell he is beaten down several times.

The other BVB fans are pushed inside the stadium through a three meter wide gate by the police, with the use of clubs and police horses. They are welcomed inside the stadium by another battery of clubs against their legs. Some of the fans are resentful and kick some of the seats out of their fixations to oppose the attacks. With even more police coming inside the bottom tier the situation calms down, but at half time a lot of fans leave the stadium before police shuts down the guest area completely. After the match police hand picks a few fans, slowly forces the others to leave the stadium and then starts giving the handpicked fans a special treatment. The screams of the arrested persons are easily heard outside the ground. 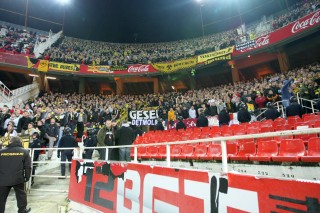 A group of 16 BVB fans will now go and spend some quality time in a prison in Seville. They are taken to a 2x3 meter big cell, some of them have a thin mattress and a run-down blanket, some of them have nothing only a light and aircon that cools down the cell. But before they are taken to their cells they are ridiculed by the interpreters, shouted at by the policemen, cash cards are nicked and they are prepared for the night with questions like “Do you know Heinrich Himmler or Auschwitz?” No guards control the cells, there are no panic buttons. On the other side of the night they are welcomed by a lawyer, more interpreters – one of them saying: “I was the one with the Schalke scarf just outside of the guest sector” – and a journey to the court. They are urged to sign a guilty plea (attacks on policemen, malicious injury), which in the end every single fan signs, to escape hell. Without the signature they would have faced some 18 months without parole. With the signature the punishment is reduced to a fee of 120€ (1.200€ for the Bosnian) to be paid in Germany and two years on parole. Furthermore they are not allowed to travel to Spain for a year. BVB fans’ 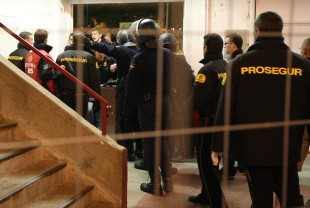 representative Jens Volke awaits them outside after they are free to go. He organizes hotel rooms for the night, as the last plane has just left Seville, and books flights home for Friday. He says: “We will inform UEFA about what happened and ask for an official statement. The safety arrangements around the stadium have been a catastrophe”. The treatment of the Borussia Dortmund supporters in a EU member state have been more than a catastrophe, they have been inhumane.