Kenny - from Dunfermline to Dortmund

Today we'd like to present you a brilliant story by Kenny, who has mailed in his Borussia story in reply to our Competition. Make sure you mail in your stories or pictures before September, 14th to win a schwatzgelb-Sweater or one of two schwatzgelb-Shirts. But now enjoy the tale of a Scotsman that just wanted to see his country play in Germany and all of a sudden was a Borussia Dortmund fan.

My little tale of how I came to be a BVB fan, begins when Scotland were drawn in the same group as Germany, for the Euro qualifiers in 2004. My friends and I all decided that our away trip would be to Germany. Got word that the game would be in Dortmund. Straight onto the Ryanair website and got the flights booked. Stayed in Dusseldorf prior to travelling through to Dortmund on the day of the game. Seemed that plenty of the Tartan Army had the same idea, as the train was packed with Scotland fans.

Arrived in Dortmund to be greeted by RAIN and lots of it. Checked into our hotel and headed straight to the Alter Markt, where it seemed that the whole football supporting nation of Scotland had gathered and all were enjoying the pleasantly familiar Scottish type weather. Met lots of fine, new German friends and headed to the stadium on the underground. After much bouncing along the tracks, we arrived at the magnificent temple The Westfalenstadion. 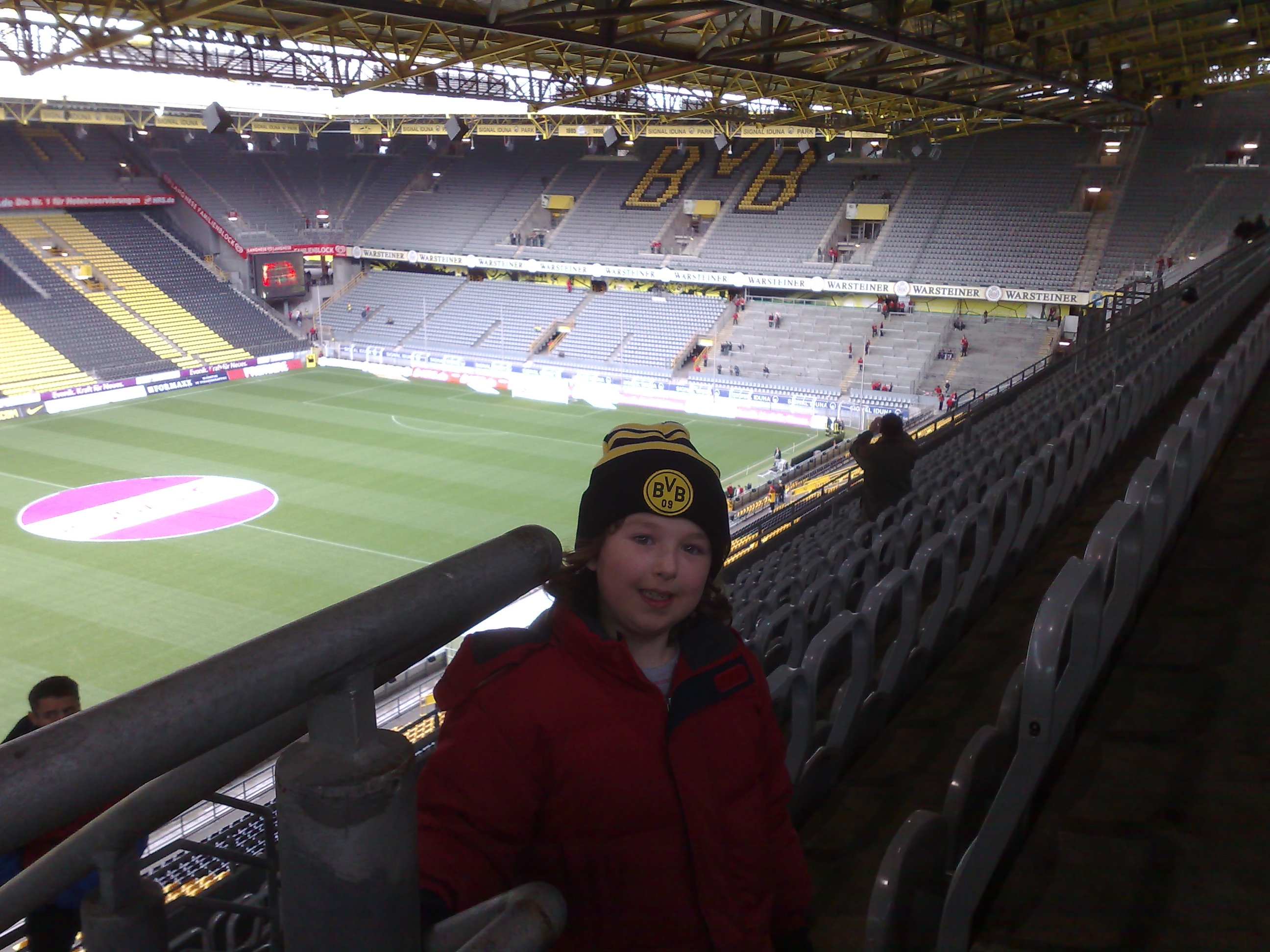 Prior to heading over, I had studied pictures of what the stadium looked like, both inside and out, but to actually see it in the flesh was quite breathtaking and awe inspiring. I also am a fan of Dunfermline Athletic, and our stadium is nice, but it only holds about 12,000, so to see a stadium with the capacity of the Westfalen, was, well you know breathtaking. Anyway, get inside and the view is everything that I imagined it would be. The atmosphere as well, was just tremendous. I said to my friend Ryan, that one day, I MUST come to see a Borussia Dortmund home game. The game went by in a flash and Germany (cheated according to Christian Dailly that is) won 2-1. Went home with some fantastic memories of Dortmund and the people, and I began looking out for how BVB got on in the Bundesliga

Kids came along and when they were old enough to be left with their mum for the weekend, I Iooked into coming over for a match. Good excuse, was on my birthday, BVB were playing Frankfurt at home. Ran it by the wife and she said of course you can go. I took my daughter with me to her first ever football match. That's one to tell her kids one day. Had an absolutey brilliant weekend and once again met some many great people, who could not quite believe that I had travelled from Scotland to come and see their team. I was hooked on BVB.

I tried to find some kind of English speaking website/forum , but could not find any. Then one day, BVBUK, pooped up on google, and there it was, my holy grail had been found. Seemed that there were quite a few Scots, that were also fans of Dortmund, probably due to the fact Murdo Macleod, Paul Lambert and to a lesser extent Scott Booth (",) had played for the Schwarz Gelb. The forum got a bit more popular and friendships were forged. To find so many Scots who also followed BVB, was unreal. The forum was re named PLANET DORTMUND, and today it is quite a thriving community for all English speaking fans worldwide. Also, the guys from Germany, have been invaluable in getting tickets and generally showing us a great time, every time we come over. To which I am so grateful for.
Told some of my friends at work about how good it is to come over for a game, that there are now quite a few more commited BVB fans that have joined in the fun. Every trip is eagerly awaited and the excitement prior to coming over, is akin to that of Christmas Day morning when you were a tad younger.

Hopefully the trips will continue for many years to come and I will be able to bring my boys over when they are a bit older, so that they to can stand on the Sued Tribune and be part of the yellow wall.

Take it easy and HEJA BVB