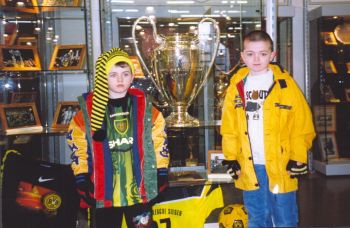 We all know that you can find Borussia fans all over the world! And today let’s cross the sea with a finger on the map and take a look 1.000 km westward from Dortmund to Ireland, or more precisely Clonmel. Clonmel is a city with round about 20.000 inhabitants, not far away from one of Ireland’s most popular landmarks, the iconic Rock of Cashel with a lot of historic buildings. But for my friends and me Clonmel is also Borussia’s local branch in Ireland!

To explain the reasons why we find Borussia fans in Clonmel and also in other parts of Ireland we have to go back more than thirty years: 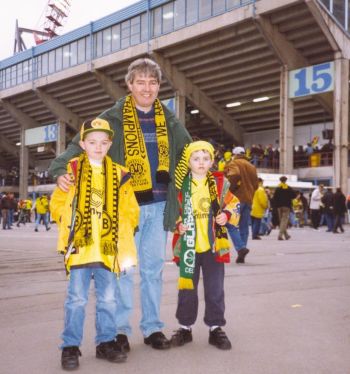 It all began when a long haired young Irishman named Philip with a guitar in his hands asked me at Dortmunds Central station what’s the best way to travel to Münster. In order to save the money for a railway ticket it was his idea to hitchhike to Münster. But the chance to find a driver for hitchhiking in Dortmund city is comparable with a German championship win for Sch…e 04 in the next years: Zero, or much better: Less than Zero!
So I decided to drive with Philip to my home in Dortmund-Mengede, a northern suburb of Dortmund, close to the highway on the route to Münster. The chance to hitchhike successfully to Münster would be much greater from there. But shortly after I invited Philip to a meal, a bottle of cool Dortmund beer and after a long chat about music and football (including a long and detailed explanation about Germany’s best club BVB), I changed my plan and drove Philip with my own car to Münster. That was the start of a long-lasting friendship between Philip and me and also the start for Philip’s strong relationship and enthusiasm for Borussia Dortmund!

We met each other during the following years at least once a year. I still visit Philip regularly in Ireland and Philip and also a lot of his friends and relatives still enjoy their Dortmund trips. Naturally Philip’s tours to Dortmund were always linked with visits to our Westfalenstadion. So a black and yellow scarf became a fixed part of Philip’s basic outfit when travelling to Dortmund.
In 1987 Philip’s son, Philip junior was born. I became his godfather and two years later the second son, Stephen followed. A small remark: Philip’s birthday is also an important day for all BVB fans: 19th December the day of Borussia’s foundation! Is it fortune or magic in black’n yellow? 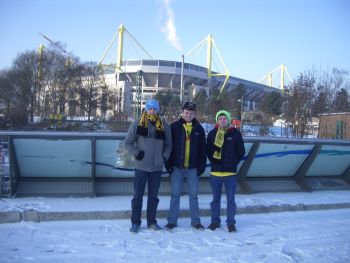 No question, that both sons followed in Philip’s footsteps as Borussia fans, supported by me and also other friends in Dortmund with Borussia posters, jerseys, flags and so on. Some years ago their rooms in Clonmel looked like the rooms of young Borussia supporters in Dortmund! And after every stay in Dortmund their BVB collection got bigger and bigger! Now 22 years and 20 years respectively Philip junior and Stephen still wear their Borussia shirts with a lot of pride. That’s very remarkable when bearing in mind that Hurling and Irish football are in Ireland even more popular than football.
So if you will travel to Ireland in the future, watch out for black’n yellow BVB shirts! It could be Philip or Stephen!

And before I close this little story - it’s absolutely worth to mention that Philip, his sons and their friends never saw a defeat of Borussia in our Westfalenstadion. Maybe, it’s an idea to invite them for our home match against Sch…e? It could be the guarantee for our overdue win…!

Guest authors solely express their own opinion, which must not necessesarily correspond to the views of the editors of schwatzgelb.com.