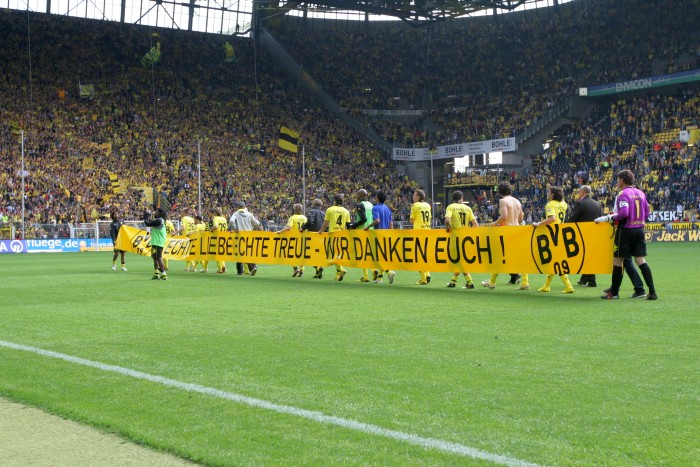 We reviewed the performances of Borussia's goalies, defender (I, II) and midfielders. Now it is time to have an eye on how our strikers performed last season. Like you might already know, each player was evaluated by three of our editors. Grades have been given ranking from 1 (perfect season) to 6 (should pay money for playing football).

Arne: Meanwhile I have eased into Nelson's skills and even had a soft spot for him. Running like crazy and working really hard are always a fresh breeze. But sometimes I caught myself getting angry because of his lack of goal scoring quality. At all I don't get a higher pulse when I see him pacing towards the goal. An even my hope that he might improve under Jürgen Klopp, has vanished. It smells like transfer. That I give him a 3.5 overall is more due to his character. 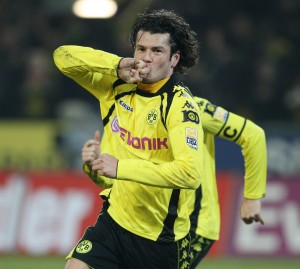 DvB: I like Nelson Valdez. The guy from Paraguay can do whatever he wants, he will be one of my favourites. Just because he tries and never gives up. Even if his weapons are very often useless, his undisputed will and heart are always there. And when he scores every now and then, it's fine for me. In Paraguay he is a hero. It would be a pity if he leaves the club. Even if some of you might disagree, in my book he deserved a 2.5.

Sascha: Somehow the Don Quichote of modern football. Do you know the feeling of pity when Nelson is in a good position to score? This though of "Come on, Nelson, we know how this will end." Without a question Valdez works hard on the pitch and takes on every duel. Someone who really works for his money. And indeed he has at least scored 5 goals and served 5 assists this season. Nonetheless the question remains, what to do with him. In left midfield Kevin Großkreutz seems to be of more help for the team. Behind the strikers is the spot of Mohamed Zidan. And up front his only weapon is that the goalie might miss the ball due to a big laugh. Nelson is really a nice guy, but that alone is not enough for the top third of Bundesliga. And for just coming from the bench he seems a little bit too expensive. It looks like he might move on and in the end that is the only possible decision. I would give him a 3.5. 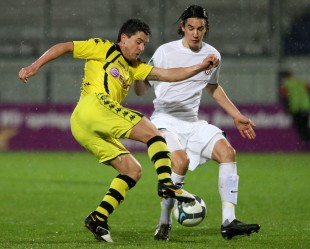 Malte D: The season preparation went well for the signing from Energie Cottbus, who has his strengths in counter attacks. A couple of goals in test matches and proper training performances brought him near to the starting line up. Unfortunately he then suffered from some minor injuries and he wasn't able to be a serious option for Klopp until the end of the season. So he wasn't able to be any threat for Barrios, Zidan, Großkreutz and Valdez. In the 3-0 win against Leverkusen he showed some of his qualities and even scored. It looks liks as he won't be more than a sub during the coming season. Nonetheless because of his pace he might be of value in the one or other match. But for this season he was just a 4.5.

mrg: Rangelov's move from Cottbus to Dortmund was somehow surprising. With him Borussia got a perfect sub and indeed in 11 matches he came on in as a substitute and two times left the pitch. He.managed to score one goal and even helped out our reserve team. Worth mentioning is that he didn't made any trouble while being a sub. Still even for a sub he scored too few goals – 3.5.

MalteS: A classical striker in the box, even though some injuries stopped him. And even more because of Klopp's 4-2-3-1 tactics with just one real striker, he was nothing more than a sub. Just behind Barrios, who performed great, there were player like Zidan, Valdez, Hajnal and Großkreutz waiting. So not really much space for the Bulgarian striker. Just during the 3-0 win against Leverkusen he showed his skills. Still it was nothing more than a 4.5. 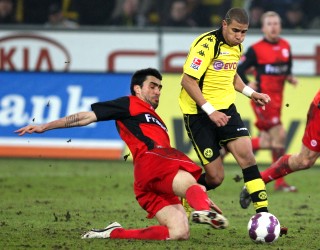 DanielR: A good season of the tiny Egypt. He showed the people who criticized him that what he can do. Joy of playing, fine technique and creativity were his trademarks during this season. With a couple of assists and superb passes he became the creative centre of our game. His importance became clear when he torn his cruciate ligaments against Hoffenheim. No one was able to fill this gap. But he also lacked the absolute killer instinct in front of the goal, and in some situations he forgot to play the final pass. Nonetheless a deserved 2.5.

MalteD: „Sandwich-Mo" would be a suiting nickname to describe his performances. Because at the start of the season all eyes were on Lucas Barrios and Zidan torn his cruciate ligament at the end of the season, his best performances where during the season. For example his extraordinary match against Wolfsburg, where he served Barrios two times perfectly. His personal highlight might be his goal at Wembley with his national side against England, just after missing the world cup in South Africa with Egypt. To mentioned is his now better balance between going into duels and passing to team mates. That results in an overall 2.5. 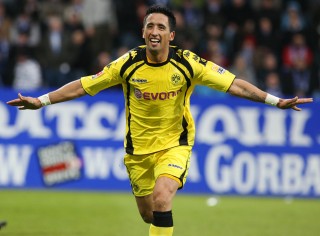 Sven: One more player with a good price/performance ratio. While being without any goal for the first 6 matches, he started his scoring spree in Karlsruhe in the DFB cup. Shortly after he scored in the Bundesliga in Galdbach and added another 18 (!) goals. He scores by head and with his legs. And then there are matches where seems out of the match and then suddenly scores two times. Right on, Lucas – 2.

mrg: From "Weltnixjäger" ("world loser") to Dortmunds scoring machine, that's the story. And it describes his season perfectly. Barrios was Dortmund's guarantee. After initial problems he adopted very well and did, what he is paid for. He is one of the reasons why he don't have to be afraid to lose points against so called "smaller teams". But against the big guns Dortmund didn't earn that much points and also Barrios scored only few goals. Nonetheless a perfect season with 19 goals (no penalty!) – 2.

DanielR: A mysterium before the start of the season. He had to replace Dortmund hero and Swiss national player Alexander Frei, many thought that would be to much for Barrios. But the Argentinean player with a mother from Paraguay exploded after a couple of bad matches at the start of the season. 19 goals and 4 assists were his record in the end, what means that he is among the best scorers of BVB of all times. With his technique, heading qualities and his goal instinct he is more or less a perfect striker. In addition to that he helps out in defence as well. Especially compared with Frei he is somehow a working miracle. Still he missed some chances in front of the goal due to being too lazy. If he performs like this in a more constant way, he could develop into a real world class striker - 1.5.