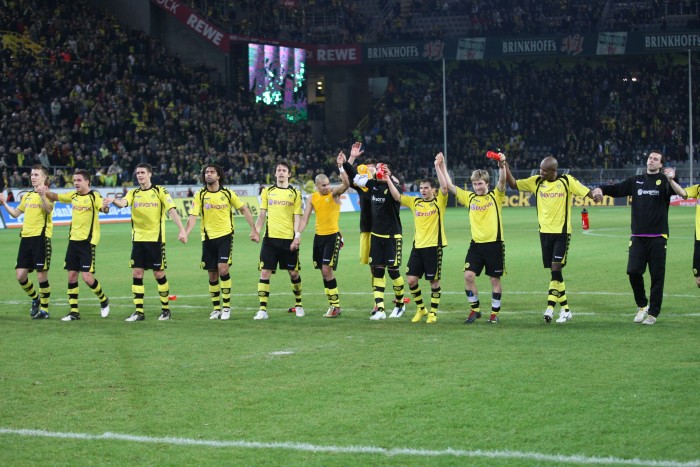 After the judgement of goalies and centre backs, this time around we put the focus on our defensive wingers. Once again three schwatzgelb editors per player present their opinion and give them marks for their performance in season 09/10, that rank from 1 (spot on mate, brilliant) to 6 (that was crap, bugger off).

Jakob: If we would talk about coolness and the appearance off the pitch here and would take the number of after match interviews into account, there would be a definite mark 1 for Patrick Owomoyela. But regrettably playing the beautiful game is part of the job of a professional footballer and if you happen to be fullback a certain level of quickness, authority and teeth. Patrick seldom shows these basic requirements in his game and has not made many friends in Dortmund with his style of play. There is no doubt, that he is one of the best of his trade in aerial combat, as he wins almost every header. The problem with him starts once he has the ball at his foot and tries to build up play or if he gets an agile opponent. Then it gets breathtaking for many fans on a regular basis. All in all Owomoyela deserves a good mark 4, considering the impression he makes off the pitch, he could earn a 3. 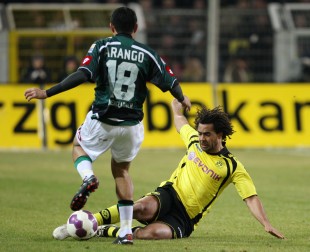 Web: His style of play often seems lumbering and nonchalant and remains a red rag to many BVB supporters. But Jürgen Klopp remained unshakebly faithful to “Uwe”. Until the last match he was always in the starting line-up, even when he was barely fit to play. In Nuremberg he was only missing because of an injury. Is this only because there was hardly any serious competition on right back? The signing of Lukasz Piszczek could point in this direction. But surely the fact, that Owomoyela played his part very reliable, was more important. As reliably as he produced the occasional blunder, he was one of the leaders in the tackling statistic. And with his strong heading game he is immensly important at set-pieces both in defence and offence. That is of course, unless he gets the idea to take a free-kick himself, like the one that ultimately dropped us out of the cup in Osnabrück.
Overall Patrick gives the impression, that he had much more in store, if he could only keep his concentration up for the whole 90 minutes. That is why, in spite of outstanding 8 assists, he goes only with a mark 3.5 into the summer break.
Christoph: Dr. Jekyll to Mr. Hyde that´s what it looked like match after match, when Owomoyela plugged away on the right wing. He might be the most controversial player of the season. If you believe the numbers, he sure is an asset to the team, who wins most tackles and has a lot of assists to his merit. But the impression you get on the terrace was mostly completely different. Balls were easily given away and quite a few counter-attacks of the opposition were directly initiated by Owomoyela. Rarely he could show the shape, that he must have had once as a former German international. Being the third oldest of our squad, one could expect more leading qualities from him. He was most convincing in games, when it went well for BVB anyway. To often he just matched the standard of the game or even managed to perform below that. If you sum up his season, it can barely be judged with a 4. 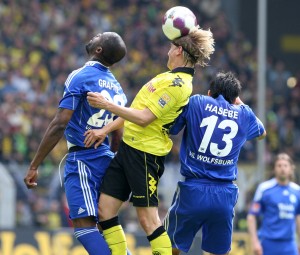 Sascha: He managed to accomplish, what would be hard even for Chuck Norris. He pushed our legend on the left wing Dede into the second row. Nobody would have thought he could do that before the start of the season and it is still a matter of controversial discussions among BVB supporters. It would be a mistake to compare Schmelzer to the young Dede. He can only loose that one. He managed to become a serious contender for the old Dede. With few exceptions he fulfilled his defensive tasks in a solid way and gave opponents like Renato Augusto or Jefferson Farfan no room to breathe. Everything is done calm, serene but firm in tackling. He must improve offensively, but you can see, that he is working on that, too. He seems less shy and hesitant compared to the start of last season and makes an effort to get a cross in more often. Towards the end he ran a bit out of gas like the rest of the team. That´s why he could not gain a 2.5 but a good 3 does not look too bad at all.
Scherben: Schmelle really got to surprise us in a positive way for the second year in a row. Two years ago we were confused were this spring chicken out of the BVB youth appeared from. And last year the last remaining BVB legend was kicked out of the first 11. And he did not only show many flawless defensive performances, but more and more managed to make an offensive impact as well as the season went on. No question, Klopp pulled a real big talent out the hat there, even if it does look slim with assists and goals (especially compared to his counterpart Owomoyela). All in all that makes a benevolent 2.5. More will be in store after the third amazing season.
Christoph: If someone makes it to push aside an established great like Dede on left wing and you hardly realize that the Brazilian is missing, that player must have had a great season. Like a busy bee Schmelzer collected the respect of the audience with his performances. His positional play is great for his age and little experience. His tactical abilities were shown in his cooperation with his partner on left wing (often young Kevin Großkreutz) and his game seemed to spectators as if he had been playing this position in Bundesliga for years. He did seem a bit uptight and insecure the season before, but all that was forgotten last year. Always willing to run the extra mile, he fought his way through every match and made many opponents look bad. He should just dare to cross the centre line more often and work on his crosses. Overall his performance can be judged with a mark 2.

Arne: A catastrophic season, there is nothing to discuss about.. First he didn't get in the season, then there were injuries and at the end he was out of the team. Where he used to start in every match, this year he played only six matches in the second leg. An unusual situation for the former continuous runner with which he dealt in a great way. No criticism, no publicly announced claims. Even on the bench he played the model player. I hope, that he finds his way back to his old strength. In the (hopefully) lot of international matches next season it will also depend on experienced players like him. So it remains to hope that Dede will keep wearing the black and yellow jersey and end his career in Dortmund. Mark 4.5 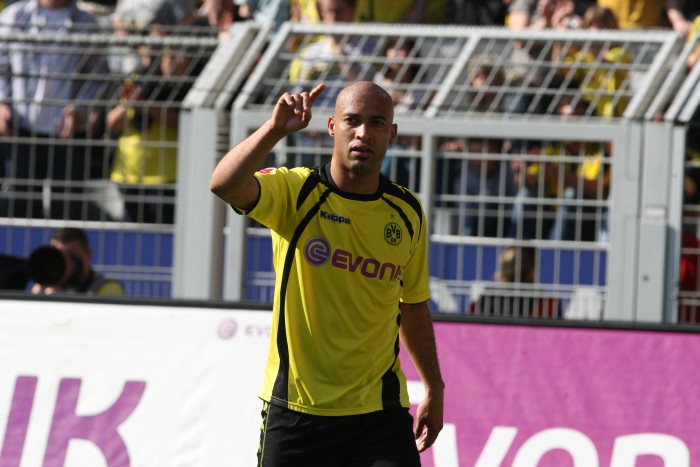 MalteS: It is a damm shame, that we had a player on the bench for most of the time, who we couldn't have imagined to end up there. On the other side it is logical that the young and faultless Marcel Schmelzer took his place and matched to the youth-style of our coach, who will continue to lead young players towards the first team. On the bench Dede showed his good character. He complied, didn't beef and no one ever had the feeling that was finished with Dortmund. In the next season the player and the leading personality of Dede will be needed, assuming that we will play lots of international matches. But for this season only a mark of 4.5.
Sascha: If there was something like a case of hardship in Dortmund then it was Dede. Disabled from a long term injury, he never got going and was replaced by a young gun named „Schmelzer“, who no one expected more than the substitute for Dede. Unthinkable, recoverd from the injury but still only a place on the bench. But it was the right decision by the coach and if Schmelzer would have had to return to the bench for the second time, Borussia would have had to search for another backup for Dede. Certainly there is no one among the BVB players who doesn't suffer with him and everybody wishes him a great season 2010/2011. His experience, his technical skills and his passion will be needed, as we are facing (we hope) a lot of international matches. For the last season Dede recieves a mark 3.5. Simply because „adequate“ is no judgement which would fit for a player of his class.

Web: It was a mixed season for the young high-flyer. In Regionalliga 08/09 he had played himself into the foreground, in a way that made Jürgen Klopp find it unnecessary to find a replacement for the likes of Lee or Rukavina. And last summer he convinced many fans with a courageous performance in the friendly against Real Madrid. But this season things got a bit more quiet around Julian. Some stalwarts continued to mention him as a possible replacement for Owomoyela, but the coach (still) sees things differently with good reason. Julian Koch celebrated his Bundesliga-debut in the Westfalenstadion against Gladbach, but totally he played only 17 minutes in 2 matches. He got practice with the reserve team whenever the schedule would allow it. He played 24 matches for BVB II in League 3.
At the start of the season Koch showed some difficulties to adapt to the higher level of the third league and in autumn he was thrown back by a broken hand. Later in the season, he could prove his diversity when he played in right or central defensive midfield. Overall he could not quite continue the development he started the year before. Next season he will try his luck on loan at MSV Duisburg. Bundesliga: No verdict possible. Reserve Mark 3.5 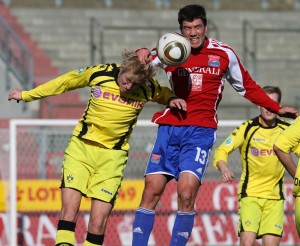 Sven: He had his first appearance in the test kick against Real Madrid and showed what he is capable of. In League 3 he could not bring any outstanding performances. That had been different in the fourth league, where he really made a big impression. It will be interesting to see, what he can do at Duisburg in Bundesliga 2. He has for sure got the talent to make it. Mark 3
Tommy: For Julian Koch last season started with a big bang. The Dortmund born was really brought on to play the second half against Madrid in the friendly at Westfalenstadion. That was for sure a childhood dream come true. But it is uncertain, if Klopp really did him a favour with this. In fact Koch could not yet make the step many fans hoped for. So the games in League 3, where he was outstanding remained exceptions. Quite the opposite was the case in the matches against Unterhaching and Jena, where BVB II lost important points due to individual errors from Koch. That many users of our German board kept calling for a change from Owomoyela to Koch, shows the wrong expectation of many fans. Mind that Koch could have still played in the U19 last season. If Koch gets to play regularly in Duisburg next season, he will be a real alternative on right wing in two or three years.

In the next edition of our season certification we judge the midfield.