Now the final has been played and Spain were deservedly crowned World Champions 2010, our three experts sum up their most memorable World Cup moments. What will remain from the tournament in South Africa? Which teams and players made an impression? Will 4-2-3-1 take over the world of club football as well? What evil plans did the octopus pursue, that scared Germany out of the competition? Why was the final so ugly? Will "soccer" ever be big in the US of A? What to expect from Brazil 2014? Find the answers plus our suggestions for the 11 greatest in the final edition of our World Cup Diary.

So after 4 years of build up and hype and 30 days of action it is all over again and still the consensus in England is that we were an embarrassment and we will never ever win the World Cup ever again. There was a glimmer of hope after the Germans annihilation of Argentina and the thought that maybe Germany were an outstanding team, so we should not be too disheartened. This was soon blown out of the water after they were outplayed by Spain, so the mood blackened again with the inquests continuing in all of the press. 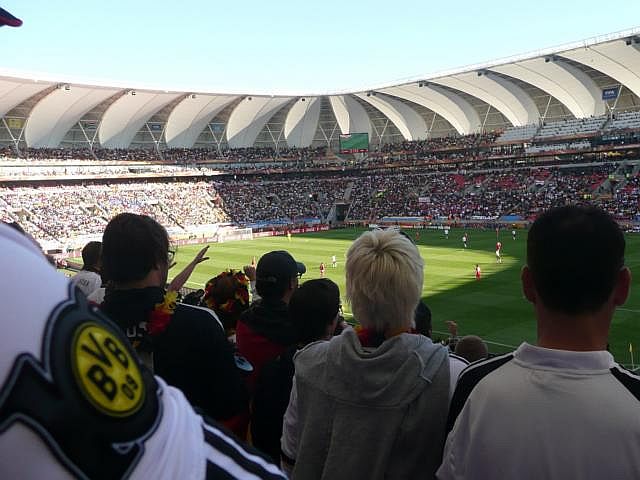 I am sure this will all soon be forgotten as the Premier League starts again and the hype surrounding this competition will go into overdrive, but its self imposed title as the greatest league in the world is slowly fading and it will be interesting to see if the World cup fallout will affect people perceptions and decide that £70 a ticket is just not for them. 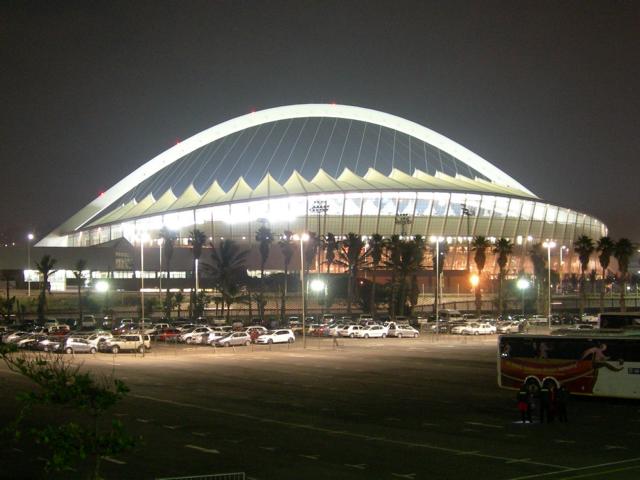 So all in all, the tournament did not live up to the hype that led up to it despite the success in South Africa which I am sure will further rejuvenate the nation for years to come. There were very few exciting games and it will not go down as a classic tournament, but maybe with sides now so scared to lose, the great tournaments of the past will be a think of the past as the pressure not to fail is more than the pressure to succeed.

So adios to World Cup 2010 and congratulations to Spain and as we all think what might have been, we can all look forward (or at least ze Mannschaft can) to Euro 2012 in Ukraine and Poland.
All the best from England,
Matty

A disgraceful final put an end to World Cup 2010 on Sunday. What will be remembered?

Derek from the U.S.

(For best results: read with recording of a vuvuzela in the background, and keep aspirin close by.) 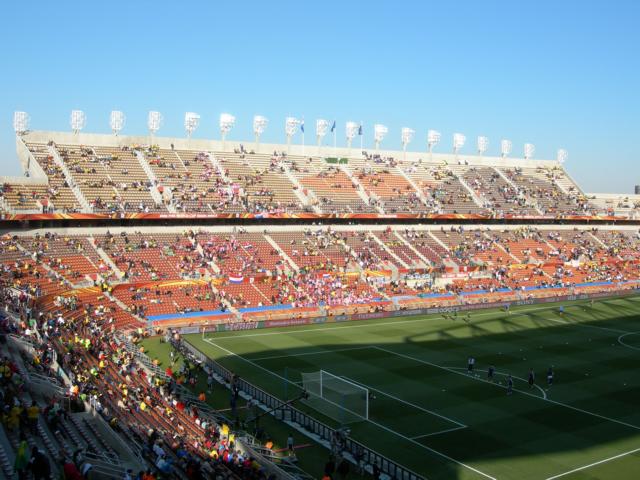 Having already had the opportunity to analyze the US's regrettably short, but still exhilarating run through the World Cup, there's a bit of time to reflect before thoughts turn to BVB's upcoming Eurpoa and Bundesliga campaigns and the inaugural season of my hometown Philadelphia Union (coached by longtime 1860 Munich and Poland midfielder Piotr Nowak, and featuring a few young players with a shot at the 2014 -- or 2018 -- US rosters.)

Although the lack of scoring is often the first factor cited during the (often tired) discussions of why soccer is not as celebrated in the US as it is in Europe, Africa, South America, (or by our neighbors to the south, Mexico, for whom it is a national passion,) another issue that shouldn't be ignored is fouling and diving. Although American sports are or have been regrettably suffused with steroids and other performance enhancers, and there have been some disgraceful incidents with sprinters and cyclists (who may be better known -- and, thus, more infamous -- in other countries than in America,) the continuum between "diving" and "signaling a foul" is, for lack of a better word, "foreign" to most American sports. Basketball players tend not to simulate fouls, and do not exaggerate motions to "alert" officials. Similarly, American football players may commit all manner of infractions on every play, but will not exaggerate the effects of someone else's infraction. This is not to say that American sports are a paragon of sportsmanship -- sadly, they are anything but. Rather, the means by which players probe the limits of the rules to gain an edge is different in soccer, and goes against certain norms or ideals. And, that there is very little scoring means that an official's decision is very often decisive. A player like Arjen Robben makes the American sports fan's head spin a bit -- such talent, and such . . . whining.

The final between the Netherlands and Spain was, in some senses, an exhibition of everything right and wrong with the sport from the American perspective. The skill and the excitement were undeniable. The Spanish team, when on their game, as Germany found, are unstoppable. That the Swiss (and the Americans a year ago) beat them seems a freakish occurrence, in retrospect -- a statistical accident or an inexplicable Tunguska-esque cataclysm. (Interestingly, much-maligned US coach Bob Bradley's strategy for dealing with Xavi was cited by Hitzfeld and even followed by Mourinho with Inter in the Champions League.) Meanwhile, the Dutch, fueled by the former Real Madrid bench (oops) fought (quite literally) for nearly two hours, only to succumb near the final whistle.
But for all for the slashing runs by Robben and artistry by Xavi, the game managed to be ugly. The Dutch made a decision to disrupt with hard tackles (hardly an innovation for this Dutch side) and the Spanish seemed to make a habit of "signaling" fouls with a flourish. All of this overwhelmed the lone official FIFA allows on the field of play. At times, it looked if the entire match was more like figure skating than soccer -- players flailing and flying to win the approval of the judge, Webb. (Thankfully, however, those events did not seem decisive.) FIFA needs to consider adding or empowering more officials. An on-field official in each half doesn't seem too far-fetched, but FIFA likely would sooner add a second ball. 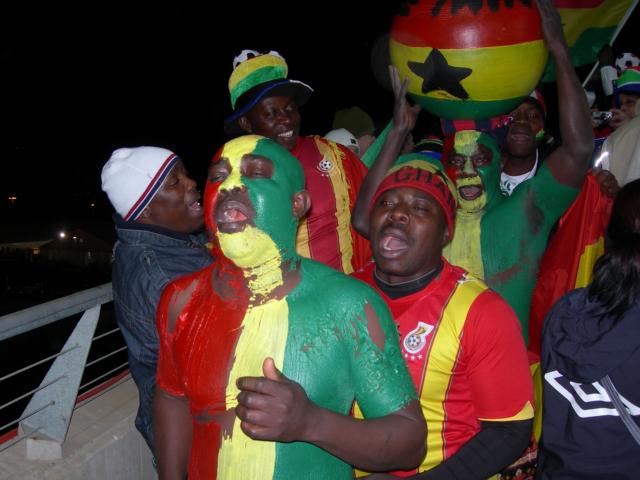 So much for the ongoing conundrum of "simulation," which will be with us for some time. What stands out when looking back at the tournament as a whole? Well, apart from the jaw-dropping skill, the cringe-worthy officiating, and the anticlimactic performances of club stars like Rooney and Ronaldo, one lasting impression of the World Cup is at first blush a trivial one, but ultimately, I think, striking. It is simply this: given the sudden triumphs and tragedies of the Landon Donovans, the Andres Iniestas, the Asamoah Gyans, the Three Lions, and the Felipe Melos, four years is a long, long time between tournaments. A great player may have four chances, at most, to play, and each time, his physical form and role with the team may be drastically different. And yet all of it ends in an instant, every four years. The Olympics are similar, of course, but simply not of the global scale of the World Cup. Landon Donovan's reaction after his team's loss to Ghana was telling: "the finality of it is brutal." He will be 32 for the next World Cup, and is likely to be a central figure in the US side once again . . . but as Michael Ballack or Rio Ferdinand could tell him, his World Cup aspirations could be done forever with a single rogue tackle. Of course, this is true for every player in every game, but the World Cup showcases the "finality" -- prevents one from banishing it to the back of one's mind. . . and this is why the victory is so special, as well. 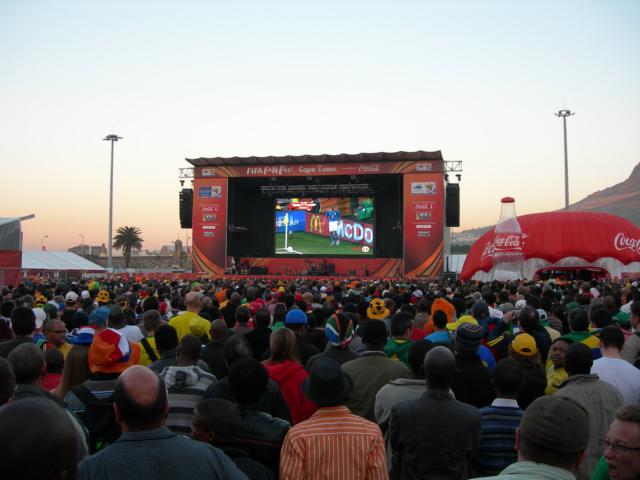 So, too, with the fans. Our perspectives cannot help but differ radically as we age from children and students, to young men and women of the same ages as the players, to, eventually perhaps, fathers, mothers, grandparents. And this is not even to mention the geopolitical or economic backdrop. Each Cup is a singular event for each fan.
And what will I most look forward to in 2014, besides the obvious Brazil/Germany final, featuring Mario Götze, Sven Bender, Kevin Grosskreutz, and Mats Hummels (whom we can forgive in advance for being a bit tired, what with their Champions League run)? Well, seeing if the US can qualify and improve, and if Clint Dempsey and Landon Donovan can be as effective in their early 30s as today. Seeing if that Lionel Messi character can actually score a goal. Seeing if another late-blooming US star can elevate the team (because of the primacy of college sports here, players tend to arrive on the scene later than in Europe.) And, perhaps most of all, seeing the games at a more reasonable hour! That, from the American perspective, will be a great leap forward.

Derek:
So, who stood out in this Cup? Well, when 2014 rolls around, I think I'll be remembering this (uncontroversial) XI. Naturally, they wouldn't all play comfortably on the field at the same time, but . . . well, you get the idea:

Tough to leave the likes of Klose and Sneijder, and off, but I'll mention them this way. I don't particularly like what Luis Suarez did, either, but his hand deserves mention, even if the rest of him doesn't. Also, let's not forget impressive players like Carlos Tevez, Asamoah Gyan, or Keisuke Honda, whose heroic performances strangely seem all but forgotten already given relatively early exits.


That´s it for the last issue of our little diary. The World Cup is done and an exciting BVB season with high European hopes lies ahead. As always our guest authors expressed solely their own opinions and I really thank them for that. Cheers to Derek, Matty, Kenny and Steph for their contributions.