For University and the course "Football Fan Culture in Britain", schwatzgelb-member Vanni had to write an essay about the importance and the characteristics of derbies. Here is what he wrote: 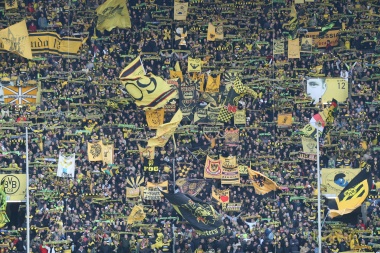 When talking about football, you can’t avoid talking about these “special” matches. You can find them all over the world, in all football leagues: German Bundesliga has Schalke vs. Dortmund, Cologne vs. Mönchengladbach or Hamburg vs. Bremen, the English Premier League has several derbies within London (Arsenal vs. Chelsea, to name only one), Manchester (City vs. United) or Liverpool (Liverpool FC vs. Everton) and the Scottish League has the “Old Firm Derby” between Celtic Glasgow and the Rangers. But what is so special about derbies? Why are these matches of a bigger importance than others even though there is no more to gain than three points? And what role do the media play?

What's so special about them?

Even though there is an inflational use of the term “derby” nowadays (for example, in Germany Bayern vs. Hamburg is seen as a north-south derby), derbies are still special for the football fans, especially when it comes to “real” derbies between two neighbouring clubs. In this case, derbies are about claiming superiority of an area (for example the German Ruhrgebiet with matches between Bochum, Schalke and Dortmund) and “standing your ground”. This idea, which is taken up in hooliganism as well, consists of the thinking of the fans of the home team showing the supporters of the away team that this is their home, their ground and there is nothing to gain there. In hooliganism, the idea was often taken away from the field and the grounds to the streets and the football match was replaced by a big fight on the streets, in pubs or anywhere where you can find someone who is a supporter of the opposing team.
Another factor of local derbies is the possibility to get to an away match in no time. To take up the example of Bochum vs. Dortmund again, only 22 kilometres separate the two cities. You can reach the ground in less than one hour and that is why you can see thousands of away fans travelling to a game in Bochum, whereas a match in Unterhaching means more travelling time and higher costs. Of course, you would create a wrong image of a derby by saying “It’s only important because the journey to the match is short and easy”, but even this small factor should not be left without consideration.
In Scotland, the “Old Firm Derby” between Celtic and the Rangers is considered to be the derby of them all since there is said to be much more at stake than football. It’s a continuation of the battle between Catholics and Protestants with Celtic representing the Catholics and the Rangers standing for the Protestants, at least that is what is written about it. But if you have a closer look at it, you will see that it doesn’t fit reality. To prove that, “only 44 per cent [of Ranger Fans] described themselves as churchgoers”, and “61 per cent [of Celtic Fans] indicated that they attend mass at least once a week” (statistics quoted in Piskurek, Cyprian. 2010: "An Unfinished Fight over the Reformation? Glasgow’s Old Firm and the Sectarian Myth", in Kirchhofer, Anton/Stinshoff, Richard (eds). Religion, Secularity and Cultural Agency. Heidelberg: Winter 107-119).

The influence of the media

Thus, the “Old Firm” is a pretty good example to underline the difference between the real importance of derbies and what is made of them. Of course, for fans, derbies are often more important than other matches, but the media tend to hype these matches even more. But why is that? Why do daily newspapers create an image of a match that is in fact more harmless than it seems? In Germany, every time that two clubs from the same area like Schalke and Dortmund or Cologne and Gladbach collide, in the week before, you can very often read about increased numbers of police officers who will be at the match or about the fact that in a whole city the sale of alcohol is prohibited. But when you really are (speaking about my own experiences as a Dortmund fan) at the match, you don’t see as many policemen controlling the two opposing fan groups as you could expect and you don’t have to be totally afraid to be part of a fight since there is hardly any. Of course, it would be wrong to say that every derby results in a peaceful time and there is no fighting at all, but it isn’t as bad as you might think when you only read the papers. 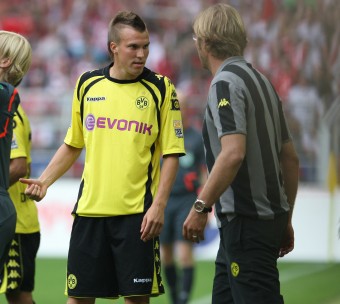 Another topic that is worth evaluating is that the media in some way even enforce the hatred between two clubs. Coming back to the Schalke-Dortmund example, before a match in the last season, Kevin Großkreutz, a young Dortmund player who was standing on the terraces of Dortmund’s Westfalenstadion only one or two years ago and who is the perfect role model for the fans as a player loving his club from the bottom of his heart, was asked by the “Sport BILD” what he would do if his child would become a supporter of Schalke. Großkreutz had three options in an opinionaire (“I try to convince him”, “There is no football god”, “I would give him away”) and he ticked what probably 99 per cent of Dortmund and Schalke supporters would have said when asked about their child becoming fan of the opposing team, “I would give him away”. What BILD made out of it, was a big story with much criticism for Großkreutz whose intention was said to be provoking and adding fuel to the fire. Dortmund’s coach Jürgen Klopp tried to stand in for his player by saying that he probably would have chosen the exact same answer and criticising the media for making so much out of one sentence. The Casa Großkreutz is a pretty good example for the way media tend to hype the importance of derbies since most fans of both clubs didn’t really care about what Großkreutz said and the media created so much of it (not only BILD, the topic was taken up in several other newspapers as well). But what is so striking about derbies that their importance is taken up again and again by the media? And why do we associate derbies more with football than we do with other sports?

One explanation could be that football is the most popular sport in the majority of European countries and that emotions are closely connected to the game. And if you take the image of the average football fan being part of the middle class (which goes back to the origins of the sports in the 19th century), this fan is also part of the target group of most popular newspapers. Thus, it is only logical that popular newspapers deal with the importance of derbies to attract the football fan to buy e.g. the German BILD. In comparison, in newspapers with a bigger claim to inform and to educate, you will find articles about derbies and it will be said that their importance is perhaps bigger than other matches, but you won’t read about a player that is said to have insulted the other team or members of it. 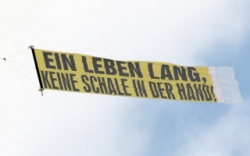 As a conclusion, you can say that derbies always were, still are and probably forever will be a phenomenon in football. If it is a local derby, a derby between two teams who battled for championships over the years or a derby involving religion, they are special and always attracting people. Even though their importance is hyped by the media, every football fan you ask will tell you, that it is not only about three points, but about so much more. Football as the sport of the middle class (although you can not generalise it like that) is the perfect place for the media to make up stories around derbies and create certain myths about it.
And perhaps it is about more than victory. Taken my personal experience again, I will always remember May 12th 2007 when Dortmund (at the end of a really disappointing season with even struggling against relegation) beat Schalke 2-0 on day 33 to destroy the championship dreams of Schalke. And even three years later, I feel this atmosphere again, I see the goals of Alex Frei and Ebi Smolarek inside of me, I get a goosebumps when watching videos on Youtube about that special day. And even though Dortmund does not come up successful against the bitter enemy that often, this day is a compensation for many losses and will still be a compensation for many years. And when you walk around in Dortmund, asking what happened on May 12th 2007 and a majority tells you “That was the day, we beat Blue-White”, you get to know that in derbies, there is really more at stake than three points.