Otto Addo: It has all become more professional in youth football 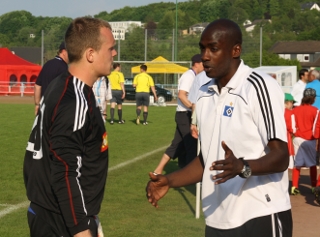 For six years Hamburg born Otto Addo wore the black´n´yellow jersey. A series of injuries kept the former Ghana international from playing more than 75 Bundesliga matches for Borussia. After leaving the BVB, Otto played for Mainz and HSV, where he is now coach of the U19. Schwatzgelb met the former BVB midfielder at the Spax-Cup in Ennepetal, a top-class U19 tournament. The HSV U19 won the cup with a 2:0 win against Mönchengladbach in the final, surpassing competition from Wolfsburg, Prague and Glasgow. Otto talked to us about the education of young talents and the upcoming world-cup in South Africa.

schwatzgelb.de: You played from 1999 to 2005 for Borussia Dortmund. What memories of the city the club and its fans do you have today?

Otto Addo: Really, really great fans! These incredible fans, who always stuck to the club in good or bad times. And also the the success we had, winning the championship. It were very good times, but regrettably I was injured a lot. But I liked the environment around Borussia. Those were good and instructive times.

schwatzgelb.de: The BVB fans especially remember the goal you scored with a torn cruciate ligament 2003 in the UEFA-Cup match at Austria Vienna (2:1 away win). Do people still ask you about this?

Otto Addo: Yes that happens from time to time, because many remember that goal. At that moment a had a huge adrenalin level. You try to think away the pain and I was lucky that the ball went in.

schwatzgelb.de: Do you still follow the development of the BVB today? 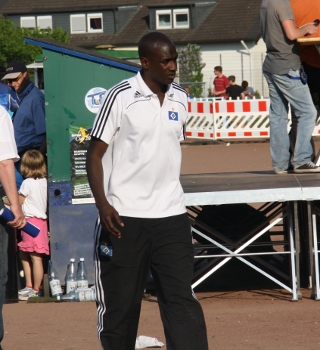 Otto Addo: Of course! I still know a lot of people in Dortmund, many friends, too. In the six years at Dortmund I made a lot of friends there and I am still in contact with them. I ring Dede from time to time and Patrick Owomoyela, who I´ve known from Hamburg. If I am in Dortmund I meet up with Roman Weidenfeller, Sebastian Kehl or Neven Subotic, who I got to know in Mainz. At the moment everything seems to go well for the club. I think, Dortmund played a pretty successful and satisfying season. And next year they´ll play international, which is very important.

Otto Addo: There are great differences, everything has become more professional. It starts with the youth teams, where you have a supra-regional league today. Before you used to play only against teams from your hometown until the U19. Today in the U17 Bundesliga you play against teams from the whole of North Germany, teams from Bremen, Niedersachsen and Schleswig-Holstein. And all over the standards have risen: You train more often, the coaches think more about the handling of the players, the build-up and the trappings have become more professional. Also from the management and the administration. All over Germany you have elite training centres and the training effort is much bigger today. You have got a coach and then a rehab coach, an assistant coach and a team manager. Take for example the physiotherapeutic treatment: Until my first year as a professional player I had never seen a physiotherapist, today that starts with the U15 teams. When it comes to speed, tactics and discipline, the requirements have risen over the years. What my boys today play on the field and what is generally played in U19 teams today, has a much greater speed than 15 years ago.

schwatzgelb.de: How much focus is put on the personality development? 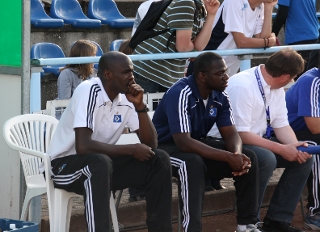 Otto Addo: That is very important, too. Of course the performance on the pitch counts, but we keep an eye on the personal development of the players. We try to support the education of the players, so they will know how to act correctly towards an employer and amongst other people, no matter if they become professional footballers in the end or not. We emphasise the social behaviour at HSV an try to convey social values to our players.

schwatzgelb.de: You played in the World-Cup 2006 in Germany for Ghana, that had qualified for the first time. This year in South-Africa they will start again. How do you rate their chances?

Otto Addo: The pressure is relatively low. They´ve got nothing to loose and they have a good squad. I think that the team will be playing tactically disciplined, thanks to their coach. You could see that already at the last Africa Cup of Nations, where almost the whole starting line-up was missing. (Editorial Comment: Only in the final they lost 0:1 against Egypt) That showed the tactical finesse of the coach. I think that Ghana, considering their unusual defensive strength – they have always been creative in the offence – can make it through the group stage.

schwatzgelb.de: You were born and raised in Hamburg. Do you still have contacts to Ghana?

Otto Addo: Of course! Most of my family live in Ghana and I try to fly over at least once a year but sometimes I go even two or three times per year.

schwatzgelb.de: What are your personal aims for the future? Could you see yourself managing a Bundesliga team sometime soon?

Otto Addo: I don´t look too far ahead. Of course, I have personal aims and try to develop as a coach, but I put my focus on each individual season. At the moment we are in sixth position and try to climb as high as possible in the table in the last remaining matches and then we will look further in the next season. I am very relaxed and try to make one step after the other.