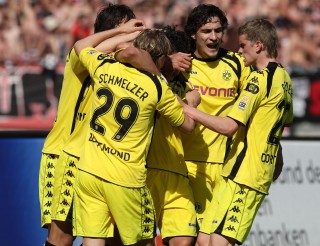 Honestly, it is very hard to describe all of my feelings this Sunday afternoon. Great relief, pure euphoria and a nice mixture of pride and honour… Finally, Borussia Dortmund is back in European Competition. 13 years after becoming the first german club to win the Champions League, 8 years after losing the final of the UEFA cup against Rotterdam and two years after our last competition on international pitches in Udine, the BVB is back where we belong… Thanks to Hamburger SV’s loss in Hoffenheim and to our 3-2 victory in Nuremberg, there is no way to lose our spot for Europe this season. It can only get even better, but first things first…

With Zidan being out with a torn ACP for the next six months – he underwent surgery today, all the best for your recovery, Mo – and skipper Kehl still not able to compete, Klopp had to make a few changes as Marcel Schmelzer was back in the line-up after his fifth booking, while Dede found himself back on the bench. Our pharaoh was replaced by Nelson Valdez with the rest of the team being unchanged. As far as Nuremberg, goes, who are in great danger of being relegated, they had to replace Breno (still out for the season) and Wolf by Maroh and Nordtveit. 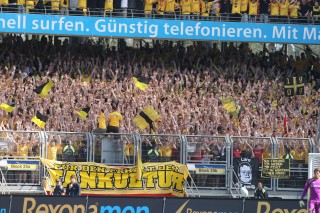 Being honest again, the first half wasn’t quite what we expected before the match. For some reason, yellow-black was not able to make use of their possession and only few opportunities could be seen on the pitch. In fact, the first time players of Borussia provoked danger; they could celebrate right away… Kuba was stopped on the right side with a foul by Pinola, Sahin, who played with a special mask because of his broken nose, brought the free-kick in and Barrios capitalized on the confusion in Nuremberg’s defense and ended his time of six hours without having scored (27th)… and it shouldn’t be the last time Lucas showed what he is capable of… Unfortunately, the lead didn’t last long as Mike Frantz was attacked too passively by Subotic and Hummels and made it 1-1 with a nice shot from the edge of the penalty area (30th). Sadly, these were the only things to be noted when speaking about the first half. For some reason, Borussia showed the will and passion, but during the first 45 minutes, the fear of possibly losing the spot for Europe so close before we reach it, came up again. Luckily, we know that it went on better… 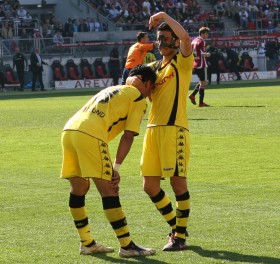 The first opportunity after the break, however, was a chance for the home squad, when Choupo-Moting’s bicycle kick was blocked by Weidenfeller. Dortmund – coming back to the game with more offense and Tamas Hajnal for injured Sven Bender – needed another standard by Nuri Sahin to create danger. A corner kick by the man with the mask found his way to Neven Subotic, whose header was brilliantly saved by Nuremberg’s Schäfer (55th) and seven minutes later, it was again Sahin, who put Barrios in scene and “La Pantera” showed his cleverness and scoring ability by defeating Schäfer in One-on-One competition. The lead was taken again and this time, it should last. More concretely, Barrios made it 1-1 after a shot by Sahin was blocked by Schäfer again and Lucas – as a german phrase sais “stood where he had to stand”. He seemed to have decided the game with his 18th goal of the season (77th). But the tension came back in minute 84, when Eigler used the fact that our defense had a used day in Nuremberg and stroke for the 2-3. A little bit of trembling, some small heart attacks and ten minutes later, we had the victory and one day later, we got our spot in European competition. Sounds like a really satisfying weekend, doesn’t it?

The weekend would have been more perfect if Bremen or Leverkusen wouldn’t have won, but perhaps our time is still to come. Next week’s opponent Wolfsburg is the reigning German champion, but we found out this season that this doesn’t have to mean anything. And with Bremen competing in Herne next week, two hearts will beat in the breast of a Borussia supporter. So let’s hope for a nice tie destroying all championship dreams of blue-white and giving us the opportunity to overtake Bremen with a win over Wolfsburg. And then, with Leverkusen struggling against fighting Hertha BSC, we could take over rank 3 and make it to the Champions League… I know that these are dreams, but dreams are there to be dreamed and with the Europa League already achieved, we have nothing more to lose. ´Cause next year we will travel to Udine, then to HSV, perhaps to Liberec… Often quoted, but representing our dreams, perhaps this sentence could be changed to “First round to Manchester, then to FCB(arcelona), perhaps to Arsenal and so on. Let’s dream, guys, we have nothing to lose and so much more to gain! 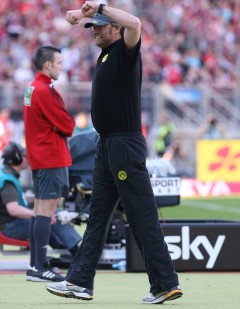 Subs: Boakye and Risse for Choupo-Moting and Tavares (69th), Eigler for Frantz (80th)