Borussia against Hoffenheim: A birthday party and hopefully three points! 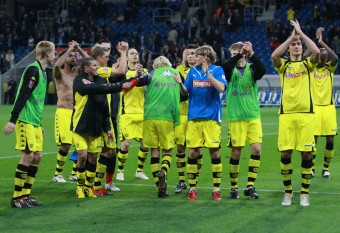 Don’t let us look back! We lost 0:1 in Mainz and our advance to Bremen has been reduced now to only one point. For some of us Hanover’s win against Sch…e moderated our defeat but that really should be cold comfort! On Sunday afternoon 15:30 CET Borussia welcomes the team of 1899 Hoffenheim and hopefully the black n’ yellows will return on the road to success or better yet on the road to Europe!

When Hoffenheim’s team is mentioned, the majority of fans reacts with mixed or negative emotions. The club without any tradition in a village with almost 4.000 inhabitants entered the Bundesliga in 2008 and climbed to the top position at the end of the first leg last season. Finally Hoffenheim closed the season 2008/2009 at number 7, not too bad for a team in its first year, but probably below the expectations of Hoffenheim’s one and only sponsor Dietmar Hopp, owner of the software company SAP. For all of us it seems to be clear: Without Hopp’s financial power, Hoffenheim would only play a smaller role in the lower German football divisions. Only Hopp’s financial engagement enables Hoffenheim’s success during the last years and of course will be absolute premise for the club’s way in the future. 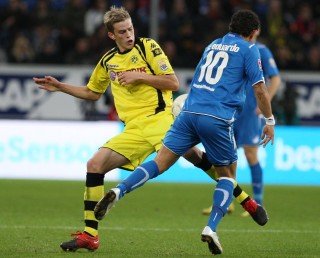 This season Hoffenheim is far away from a position in the upper regions of the table. Currently on position 12, only 4 defeats and 2 draws in the last six matches. For many experts or so called experts it is proof enough, that money can’t change everything in football. Rumours are afloat about disharmonies in Hoffenheim’s expensive team and disputes between coach Ralf Rangnick and billionaire Hopp go around during the last weeks of the club’s sporting decrease. But it’s not the issue of this warm up report to analyse the atmosphere in “Hoppenheim” or to criticize Hopp’s financial support. A lot of supporters showed their rejection of Hopp’s strategy in Anti-Hopp protests with chantings and posters. But we all probably must recognize that financial power becomes more and more important at the expense of tradition and fans’ opinions. A very sad development, but there are a lot of other examples very similar to Hoffenheim in Europe’s football leagues: Mighty sponsors with enough financial power to buy success in football – a very dangerous combination! 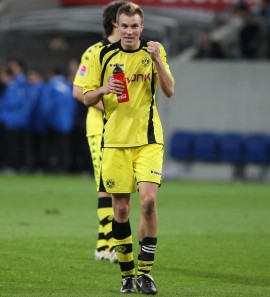 But let’s leave this annoying chapter of sponsors / investors and their strategies now and take a look on upcoming Sunday afternoon:

For Hoffenheim it’s uncertain, if former German international goalkeeper Timo Hildebrand will return to the team. If he will not be fully recovered until Sunday, 26-years-old Daniel Haas, will be Hoffenheim’s goalie. Also defender and skipper Per Nilsson and striker Demba Ba will not enter the green in our Westfalenstadion. The latter scored 5 goals for Hoffenheim this season, but Vedad Ibisevic and Chinedu Obasi, together with 14 goals for Hoffenheim will be for sure work enough for Borussia’s defence. 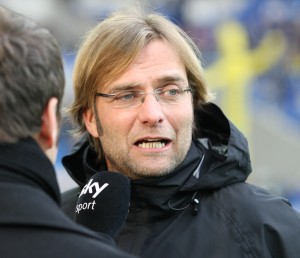 For Jürgen Klopp it’s not easy to find the final lineup for Sunday. Sadly, for Sebastian Kehl this season could be over. His recovery will probably take three or four weeks, so Sven Bender will once again try his best to replace our skipper. Patrick Owomoyela on the right of our defence will return to training on Saturday. If he will not enter the green due to his groin injury, 19-years-old Julian Koch will make his first start for Borussia Dortmund. Beside Kevin Grosskreutz maybe the next of our “Dortmunder Jungs”! 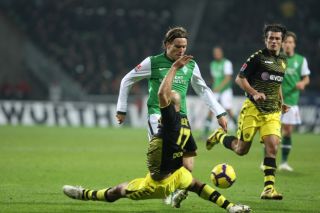 Marcel Schmelzer received his fifth yellow card in Mainz and on his position we all will welcome one of our heroes! Welcome back Leonardo Dede! After a lot of injuries like a broken jaw, concussion and ligament rupture, the darling of the public will return. And that won´t be enough! On Sunday Leonardo will celebrate his 32nd birthday. And who could imagine a better place for his birthday party than the green in our Westfalenstadion? In an interview Dede explained “that the opportunity, to play from the start, is really the best present, I could have wished for. It just can’t get any better. I’m very happy!” Three sentences we fully believe, because it’s 1909 % Dede!

To celebrate Dede’s birthday together with a win against Hoffenheim, would be the best combination for a perfect Sunday afternoon!