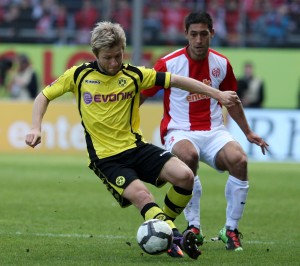 The timing would have been perfect. We had an away match in Mainz while third-placed Bayer Leverkusen had to face Bundesliga leaders Bayern Munich. That was our chance to overtake Leverkusen and head for Champions League qualification. But it went all wrong. While Leverkusen earned a point with a spectacular performance, we denied any kind of performance in Mainz and lost 0-1.

Jürgen Klopp had to cope with Sebastian Kehl’s injury. Our skipper suffered from a ruptured adductor muscle and faces another three or four weeks of pausing time. Maybe that means that we will se him back only at the start of next season. What a pity, especially has he was injured so often during the last years and as he was just on his way back to a top performer on the pitch. Young lad Sven Bender took over Kehl’s position in holding midfield accompanied by Nuri Sahin. Both were backed by flat four Owomoylea, Subotic, Hummels and Schmelzer plus goalie Roman Weidenfeller. Kuba, Großkreutz and Zidan were our boys in attacking midfield while Lucas “La Pantera” Barrios was our sole striker.

Mainz coach Thomas Tuchel made three chances. Zabavnik, Trojan and striker Bancé replaced Polanski, Heller and Ivanschitz. The latter ones were missing due to booking suspension.

The setup was perfect for Borussia Dortmund and we were eager to climb up the table. And indeed, we started in style and had the first approaches while Mainz was still trying to get into the match. Kuba drove a first nice attack down the right wing but his attempt of a shot was blocked by a Mainz defender. It was the start to a period of Borussia dominance. We controlled midfield and had nice approaches every now an then, while Mainz was pushed back to their half of the pitch. Still it took until minute 23 for a next arouser, when Lucas Barrios fired a fierce shot from 14 metres distance half left position. As the angle was not that perfect the shot was an easy clear for Mainz goalkeeper Heinz Müller. Nonetheless the following corner kick created another chance for BVB. Sahin took the set piece and found Owomoyela, whose header was cleared by Mainz defender Soto on the goal-line. Borussia Dortmund kept up the pace and another 60 seconds later they were close to their first goal. Mainz defence was trying an offside trap but missing Lucas Barrios. Our Argentinean top scorer played a short distance volley but unfortunately wasn’t able to aim away from the middle of the goal. Heinz Müller showed what an extraordinary goalie he is and cleared the ball with a fantastic reflex. By now it was all over Dortmund and Mainz was lucky to still hold on to this goalless draw. But sometimes when you don’t score, the opponent will for sure. In minute 30 Hungarian striker Szalai paced from the right side into Dortmund’s box. With a fine dribbling he paced past BVB defender Mats Hummels. Mainz young striker, who is on loan from mighty Real Madrid, aimed perfectly for the lower left corner and left BVB goalkeeper Roman Weidenfeller no chance for a save – 1-0 Mainz!

This was really an undeserved and unnecessary one. Somehow this goal took the momentum out of Borussia’s gameplay. While Dortmund wasn’t able to create any other chance during the first half, Bancé had another approach in minute 33 when his powerful free kick from 25 metres distance was cleared by Weidenfeller. 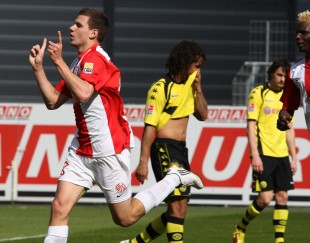 And indeed the second half started like the first 45 minutes ended. Borussia Dortmund was still shocked by Szalai’s goal. Mainz played an intelligent style of football. The waited deep into their own half and tried dangerous counter-attacks every now and then. BVB’s only method of breaking up Mainz’ defence curtain were high cut-in passes. 13 minutes into the second half Jürgen Klopp was fed up by the performance of the eleven black-yellows boys on the pitch. Nelson Valdez entered the arena in favour of Kevin Großkreutz. But the next arouser was due to a Mainz attack. Subotic lost the ball to Mainz striker Schürrle. The young lad fired a powerful shot from 25 metres that hit the lower side of the bar and bounced back into the field. That was a real close one! Borussia was now again controlling midfield but absolutely lacked any dangerousness. Their only chances in the remaining 30 minutes were three headers by Valdez, Owomoyela and Subotic. All of them were no problem for Mainz goalie Heinz Müller. On the other side substitute Amri tried a lob from 50 metres distance that found Weidenfeller puzzled. But as the ball bounced above the bar the match ended 1-0 for Mainz.

We had the great chance to jump onto a Champions League qualification spot. Especially as Leverkusen shared points with Bayern Munich later on that Saturday. Our first 30 minutes were ok or even good, but when Mainz scored their shock goal, we didn’t show any kind of reaction and deserved that zero-pointer. Nonetheless we still have all options to climb up the table during the last four weeks. The next match is against Hoffenheim this coming Sunday.

Thomas Tuchel: „We won but I am not satisfied with the way we played. We lost coordination on the pitch and didn't get into duels. Borussia Dortmund was really strong and the pitch itself was in a lousy state. Nonetheless we don't have to excuse for winning today.”

Jürgen Klopp: „My team performed well. We used the whole width of the pitch and had lots of ball possesion, but forgot to score. Mainz on he other side used their first approach. That was for sure a superb action. I am sorry for my team, but at all we lost one point at maximum as I don't think that we were able to score more than one goal today.” 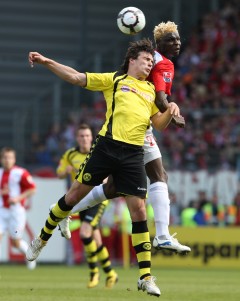