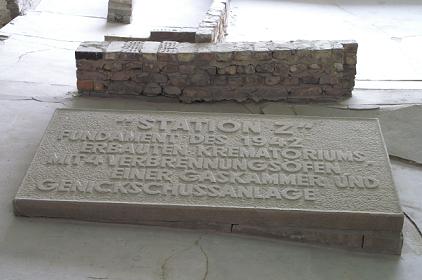 But how is this related to Borussia Dortmund? The clubs fan base support and the fan department offered a trip to the away match in Berlin with an overnight stay, followed by the visitation of the concentration camp memorial mentioned above. This offer was adressed to all fans of Borussia Dortmund between 16 and 24. So on early Saturday morning around 50 young people met at the Westfalenstadions north tribune, to enter the bus to the capital city. Around 10 past 6 a.m. bus driver Manfred started the engine and after a short introduction by the fan base supporters and a longer one by Manfred it became more and more quiet, because most of the attendants tried to get as much sleep as possible, after getting up that early. After 2 stops in Porta Westfalica and Theeßen we reached the bus-park at the Olympiastadion at around 1 o'clock p.m., where most of the group started their walk to the stadium itself. 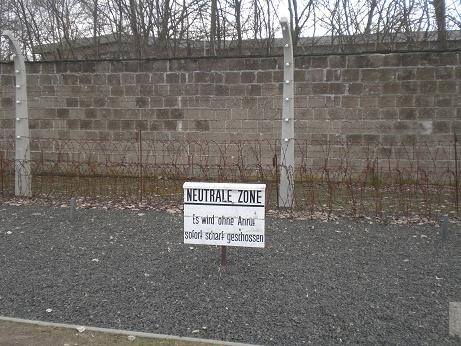 As all of us know, this game was nothing to be proud of. Right after the match the U24- group met back at the bus-park, from where we started our way to the youth hostel „Am Wannsee“ at 10 past 6 p.m.. Right there the advisors went in first, just to come back with a lot of rules, they told us about. There was laughter about a 250€ smoking- penalty inside as well as about disappearing keys (the previous year in another youth hostel key numer 1312 missed...) and afterwards the groups of 4 people went to their rooms. 45 minutes later the whole community met again, to make plans for the following evening. A little later the first few of the group went to the local fast-food-store and went later on to Berlin city, in order to explore its night-life or to visit friends. A way smaller part of the group stayed with the fan base supporters at the hostels „disco“, a basement room with not much in it. By and by more members of the group came to the disco and so it was a nice evening with music, beer and softdrinks as well as games, to get to know each other and a lot of joking around.

The next morning came earlier due to the change to summertime so that most of the young people got up to eat breakfast which was available from 6:30 (7:30 in summertime). At 10 o'clock a.m. the youth hostel was left and after taking a group photo, the Dortmund fans entered the bus, which drove them to Oranienburg, where the concentration camp memorial Sachsenhausen is located. Right there the group was split into two smaller groups, after receiving a short introduction by Stephan Horn (student of history in Berlin). The second group was guided by Tobias Weber, who offered more knowledge about cultural than historical backgrounds. While walking down the same way, former concentration camp prisoners were forced to walk down not too many years ago, there was a friable feeling arose. Especially the fact, that prisoners were abused to build casinos or produce luxury goods for the SS, is a proof for the disproportion that had its source in the inhuman nazi-ideology. Walking past the area, where the former SS headquarters were located, we passed the main entrance below tower A. It consists of an iron gate, displaying the infamous slogan known from concentration camp Auschwitz: „Arbeit macht frei“ (work sets you free). Moving around, after walking through the entrance, you could see the „neutral zone“, which was fenced with barbed wire and featured a walk for the guards directly behind the wire. A sign displayed the warning, that you get shot, if you enter the neutral zone. All in all, this sent a clear message: Once in, you will die there. Tobias Weber mentioned, that a lot of the prisoners chose suicide in the neutral zone, in order to escape from the daily torture. Furthermore the group went into an original barack, built buy former concentration camp prisoners. The things that could be seen inside were frightening- just 14 toilets for up to 600 people living in it, triple bunk-beds next to each other and the bedding was made of straw. According to Tobias Weber in the past there existed a group room, which had to be transformed into another „bedroom“ later on due to shortage of space. 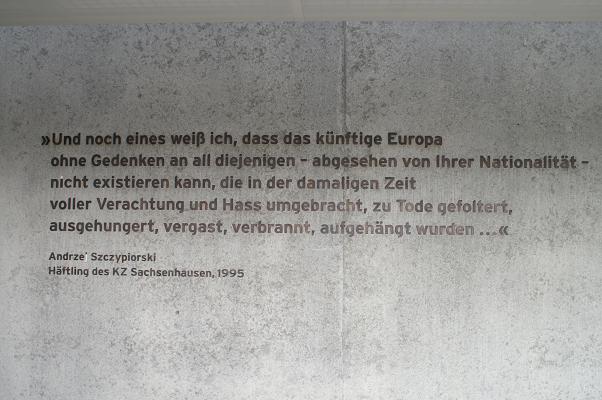 The group sat down in a re-built group room and was told about systematical underfeeding, which happened between 36-45 as well as during the later times, when Sachsenhausen was used by the Sowjets. Work hours were from 5 a.m. To 6 p.m., so the prisoners had no time for hygiene, which caused diseases. Before and after work and even during lunch hour all prisoners had to stand still on the mustering ground, to be counted - regardless of time and temperature. Discipline was very important, because the SS guards were looking for any reason, to maltreat the prisoners. In addition we got to know, that companies hired forced labourers from the concentration camps. In contrast during sowjet use of Sachsenhausen, prisoners weren't allowed to do anything and were forced to just sit or stand around, so it was called „silence camp“. Walking over the huge -but still way too small for 60.000 prisoners- ground, you could see a huge obelisk built by former DDR government as a memoria,l which was used more for political influence, than as remembrance of what happened. In the former prisoner´s kitchen you can now find the main exhibition, where our group got told about the concentration camp clothes and their codes. Imprisoned in Sachsenhausen were rather political enemies and people rated as anti-social like for instance alcoholics or homosexuals than jews.

After a short stay there, the guide led the group behind the camp walls onto former SS ground. Right behind the wall, you could see a ditch, which was used to shoot prisoners as well as the fundaments of Station Z. This name is no coincidence - the prisoners life was planned from Tower A to Station Z and so inmates were killed there by a so-called „automatic shot-in-the-neck-system“, which actually was was not automatic at all, but was operated manually from a hidden position. Other prisoners were killed by experiments with gases. In order to restrain them from resisting, the SS acted as if it was an examination. After the quick death by getting shot or the painful death during experiments, which were partly finalized with shots, because the gas was not „successful“, the corpses were burned in 4 great ovens. This work was done by other inmates, who were forced to live in Station Z, so they couldn't tell anyone, what happened in there. But the smell of burned people lay over the concentration camp as well as over Oranienburg, but in the city the people thought, that the imprisonments in the concentration camp were justified and the inmates deserved to die. 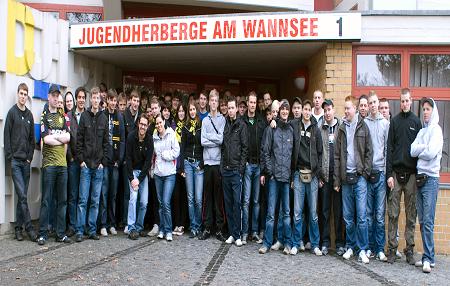 After a final estimation of the amount of human ashes found in the concentration camp, compared to the documented number of 35.000 victims, both groups went back to the initial point, to talk with both the guides as well as with the advisors, about what happened in the last 2 ½ hours. We talked about our impressions, expectations and some of us, who had visited a concentration camp memorial before, drew comparisons to their former visits at comparable memorials. Stephan Horn emphasized, that our democracy is invaluable and that we mustn't take it for granted. Sebastian Walleit, one of the clubs fan base supporters, drew comparisons to the Ultrá- culture, which also fights for a special kind of freedom. After Jens Volke had told the group about the following events, we entered the Bus again in direction to the Ruhrpotts capital, where we arrived after 2 stops at around 9 p.m..

All in all this trip was a gain for everybody apart from the match on saturday. Borussia Dortmund once again offered a trip, which isn't offered by any other club in Germany and which will stay in every attendants mind.